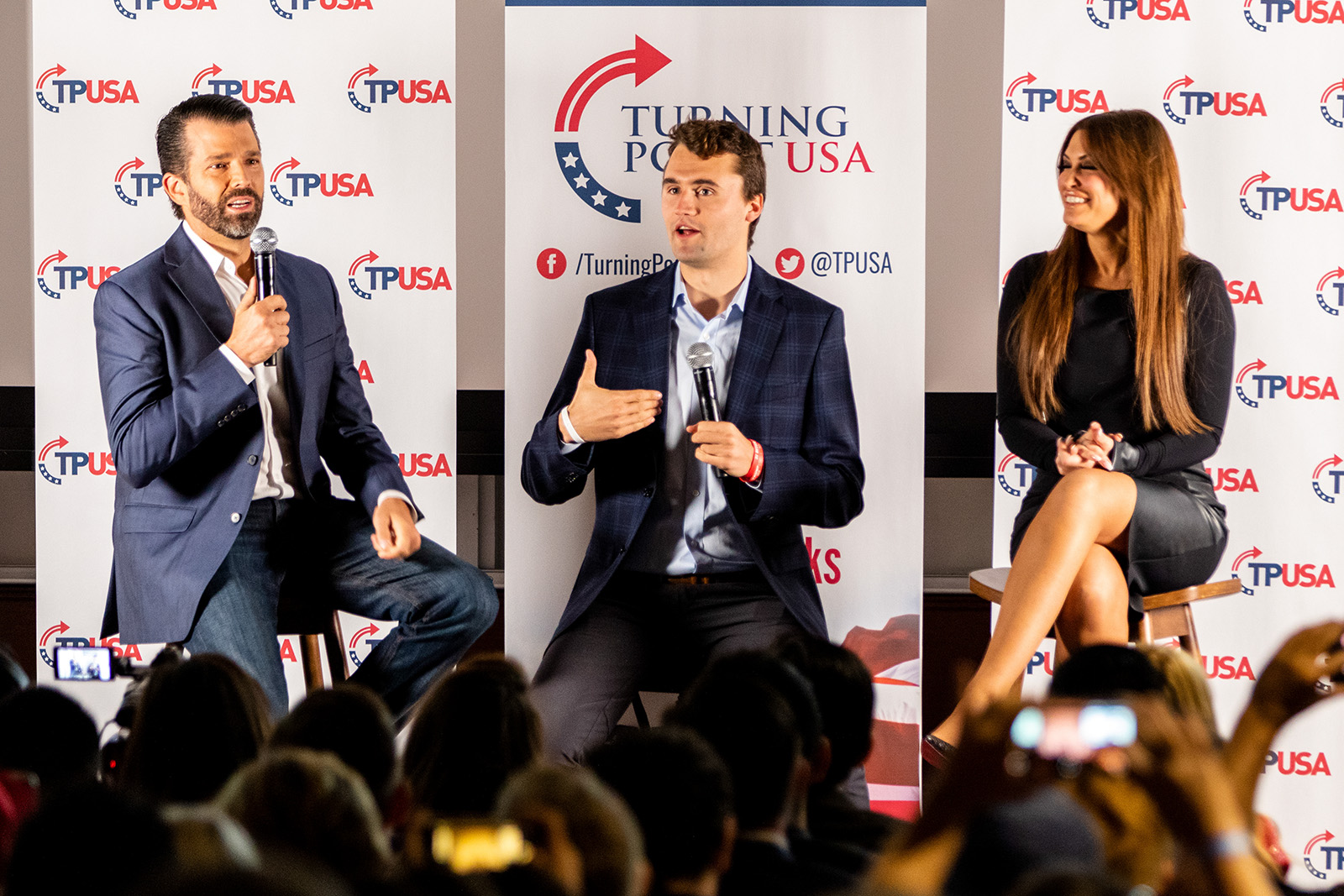 A campus visit from Donald Trump Jr. to promote his new book drew both crowds of supporters and protesters.

The event was hosted Sunday by the UCLA chapter of Turning Point USA, a conservative organization with chapters on college campuses across the country.

Trump, who came to promote his new book titled “Triggered: How the Left Thrives on Hate and Wants to Silence Us,” was joined on stage in Moore Hall by Charlie Kirk, the founder of Turning Point USA, and Kimberly Guilfoyle, an attorney, former Fox News host and Trump’s girlfriend. More than 400 attendees filled the hall.

Trump said during the event that he has faced discrimination for his conservative beliefs, which he said contradicts the principle of free speech.

He also spoke about visiting communist Czechoslovakia as a child, and criticized Senator Bernie Sanders’ support of democratic socialism.

“Waiting in a bread line is not as glamorous as Bernie would have you believe,” Trump said.

Dozens of protesters from Refuse Fascism, the Revolution Club UCLA, the Afrikan Student Union at UCLA and Young Democratic Socialists of America came to demonstrate outside the event. Refuse Fascism also later demonstrated on the Hill.

During the event, a woman wearing a hijab stood in the back of the venue with her fist raised and periodically chanted slogans. Guilfoyle suggested that the protester supported the recently killed Islamic State leader Abu Bakr al-Baghdadi without offering any evidence.

“Individuals in the back, there are student health services available,” Guilfoyle said. “Why would you cheer someone that murders and rapes women and children?”

Guilfoyle’s comment was met with laughter and cheers from the crowd. The protester entered into a shouting match with Guilfoyle before being drowned out by pro-Trump chants from the crowd – there were no other active protesters inside the event.

Michelle Ohanian, policy director of Bruin Republicans and a third-year history student, said she thinks protesters should attend the event to listen to what Trump has to say.

“The best thing I think a protester can do is first to reserve a seat, sit down, listen,” Ohanian said. “If you’re not exposing yourself to things that make you uncomfortable, I strongly believe that you are not challenging yourself.”

The question-and-answer session planned for after Trump’s speech was canceled because Trump said attendees could take what he said out of context. However at the beginning of the event, organizers said the session was cancelled due to time constraints.

Esteban Villegas, a third-year political science and philosophy student from California State Polytechnic University, Pomona, who attended the event, said he thinks the event contradicted itself for criticizing left-wing politicians who suppress free speech while not allowing a question-and-answer section.

Jacob Leventhal, a recent graduate of USC who attended the event, voted for the Democratic nominee Hillary Clinton in the 2016 presidential election. Leventhal said he was entertained by the liberal activists protesting against Trump.

“I just think it’s kind of funny when you see these people losing their minds over seemingly innocuous things,” Leventhal said.

Daniel Blecker, a first-year global studies student, said he attended the event because he was interested in seeing what it would be like to attend a pro-Trump event. He said he thought the event was overwhelming and terrifying.

“(Trump is) scared of being triggered by the questions people ask,” Blecker said. “He came here because he knows he can get a reaction.”