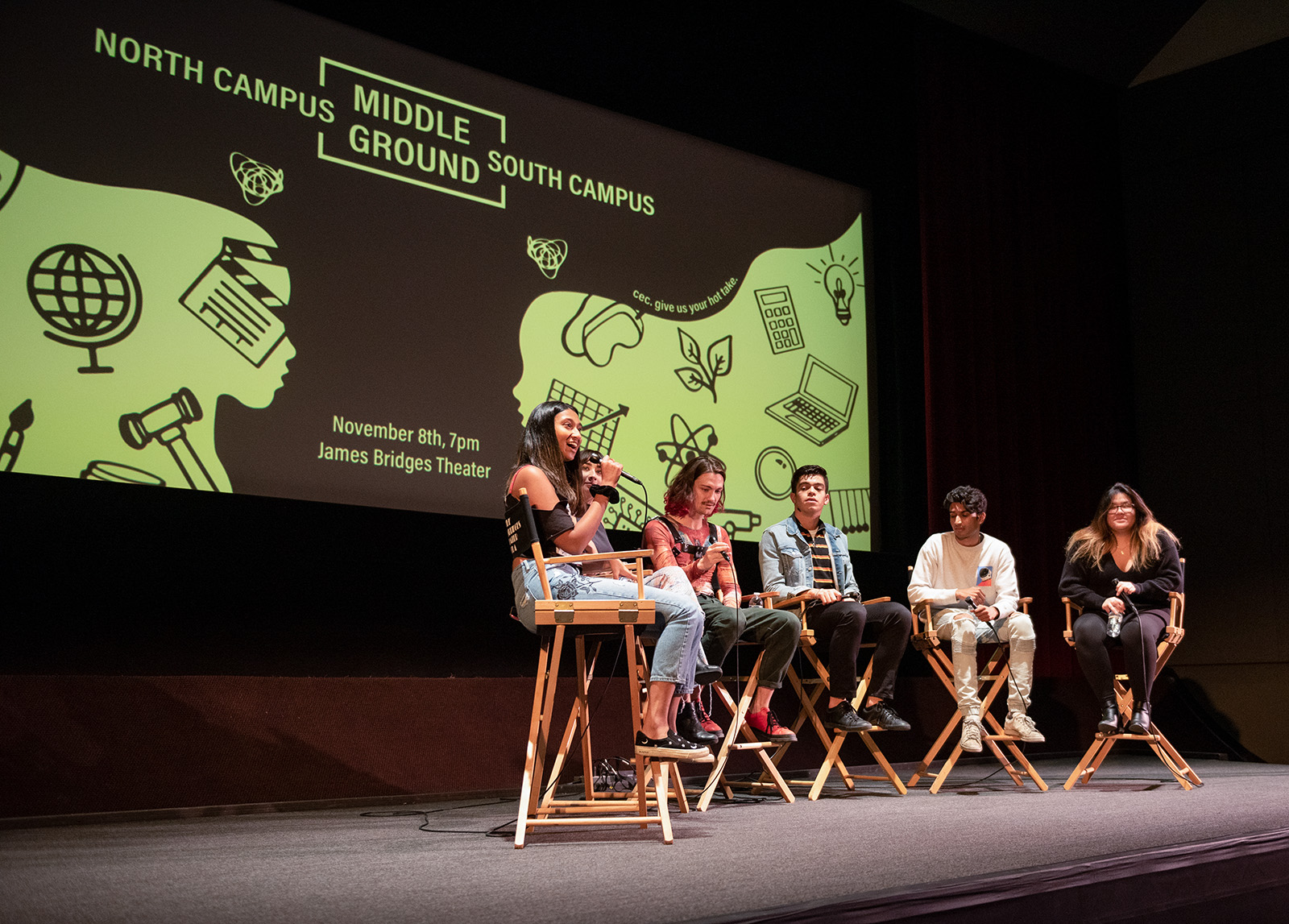 North and south campus students faced off Friday night in a discussion hosted and mediated by Jubilee, a popular YouTube channel. The event was part of the channel’s “Middle Ground” series, which aims to help conflicting groups empathize with each other and find common ground. (Lauren Man/Daily Bruin)

North campus and south campus students debated the struggles and strengths of each side of campus at a live-streamed event at the James Bridges Theater on Friday night.

Jubilee, a popular YouTube channel, hosted a debate between representatives of north and south campus to try to help them reach a common ground. Jubilee Media is a media company that makes Youtube videos focusing on bringing people together despite stereotypes or differences in belief.

The company reached out to UCLA’s Campus Events Commission to host its first live event based off its popular “Middle Ground” series in which two opposing groups of people have a mediated discussion.

Participants applied to be representatives for their side of campus by submitting a video application to CEC.

Representatives from Jubilee asked the participating students from north campus and south campus to indicate if they agree or disagree with statements such as, “My side of the campus works harder,” and, “I am worried about getting a job.”

Participants said they took away new ideas from the conversation.

The participants said the dialogue was successful and that the two sides have more in common than they have differences.

“I think that at the end of the day with this whole like north campus–south campus beef, it’s really like a small minority of both sides that’s creating the most noise,” said fourth-year art history student and north-campus representative Tiernan O’Neill. “We all worked (so hard) to get here, why devalue other people’s work and hustle?”

“A lot of what we’re known for is kind of like empathy and kind of making sure that people are coming from a place of no judgment. Coming together and sharing differences and perspective in a fruitful way,” said Jubilee Creative Director Ien Chi, who helped emcee the event.

Jubilee took a poll of colleges that would be interested in conducting events and found that UCLA had a high level of interest, said CEC speakers Director Sage LaCroix. Jubilee then reached out to CEC to coordinate and choose a topic of discussion.

“We decided to do north- and south-campus majors because it’s a conversation we always talk about at UCLA in a really heated way,” LaCroix said. “I hope this will help people understand that stereotypes are just stereotypes and each person, whether you’re north or south campus, might not fit into a certain category.”

Students who attended the event enjoyed the discussion and said they could relate to the opinions of the participants.

“I think even the audience got to participate in a way by reflecting on what their own answers to the questions would be,” said second-year psychobiology student Ruth Chincanchan.

Attendees also appreciated seeing the two sides of campus come together in agreement.

“I thought it was going to be a lot more polarized, but was nice that people saw each other’s point of view,” said fourth-year mechanical engineering student Shubhra Singh.

Jubilee Producer-Director Erin Lau, who mediated the event, said the debate was a very successful first live “Middle Ground” and she hopes they will do it again.

“They were willing to be very open and vulnerable about some of their experiences and that’s honestly part of what makes for a compelling ‘Middle Ground,’” Lau said. “The human experience of what you felt, experienced and struggled with is something that connects all of us. Having a couple of students who were willing to go there was really appreciated.”

Students who attended said they were satisfied with the result of the event, reporting a feeling of solidarity with both sides of campus.

“I guess what ‘Middle Ground’ is all about is that we just need to understand each other, hear each other and find a middle ground instead of having these arguments,” said third-year psychobiology student Ann Bui. “We came into it and realized there really shouldn’t be a debate about south campus versus north campus, we’re just UCLA students at the end of the day.”