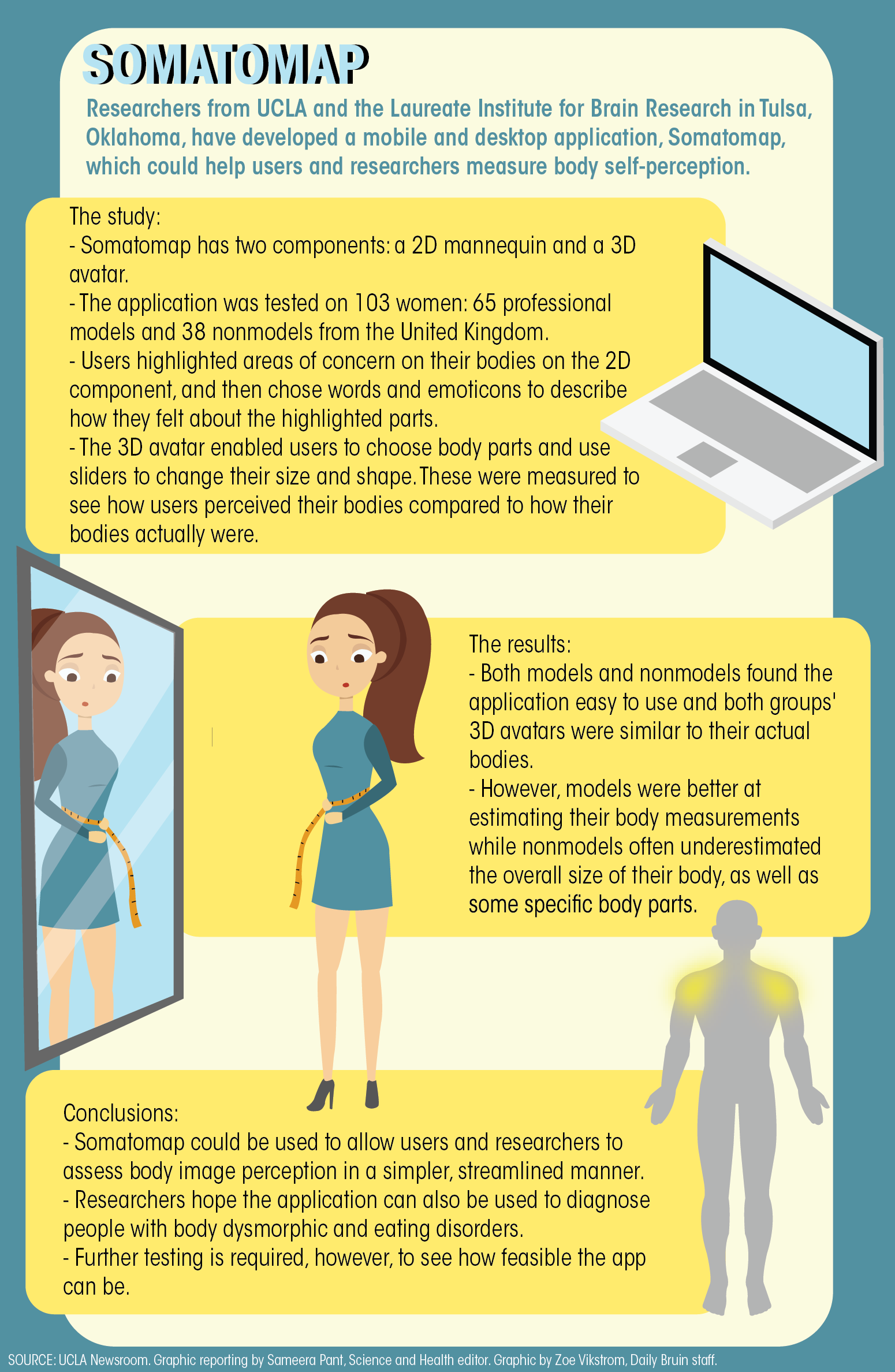 Researchers at UCLA and the Laureate Institute for Brain Research in Tulsa, Oklahoma, created an application to demonstrate the difference between how people perceive their bodies and their actual appearances.

Somatomap was created in order to visually represent the way people think they look, said Christina Ralph-Nearman, a postdoctoral research fellow at the Laureate Institute`, in an email statement. She was a fashion model before she became a researcher, which influenced her work on Somatomap.

“My past experience as a fashion model and current profession as a researcher integrated through the development of Somatomap,” said Ralph-Nearman, the first author of the study.

While other tools exist to measure body-image perception, these have many limitations, Feusner said.

“Somehow, we needed to create a way in which you can access what (individuals) think of their internalized body image,” Feusner said.

The internalized body image refers to what individuals see when they look in the mirror, how they imagine their bodies look, and what size and shape they think they are, Feusner said.

The application has both 2D and 3D components, said Dr. Armen Arevian, the director of the Innovation Lab at the Semel Institute for Neuroscience and Human Behavior and study co-author.

On the 2D component, users can highlight on an image of a medical mannequin any particular body parts which they are concerned about on their own bodies. When the user saves the image, the app creates a matrix of 0s and 1s which indicates where they marked, Arevian said.

Using the tool and the resulting data from the matrices, clinicians may be able to get an estimation of which bodily regions cause concerns for patients, Feusner said.

“It’s cumbersome for (individuals) to try and describe every single body part and where it is on the body,” Feusner said. “So we created the 2D tool where you can just draw your concerns.”

The 3D component was created from a camera scan of the body of an individual chosen at random, which is used as a 3D avatar.

In the 3D plugin, participants use a slider to adjust the size of the avatar’s body parts to match how they see their own. When a user finishes their selections, Somatomap compares their perceptions of their measurements to their actual measurements, Arevian said.

The researchers then used the app in a study, which was published in JMIR Mental Health, to determine the difference in body perception between models and nonmodels. Participants of the study included 65 female fashion models and 38 women picked from the general population of the United Kingdom, Feusner said.

The researchers chose to involve fashion models in the study because they receive more feedback on their appearances because of the nature of the industry they work in, Feusner added.

Participants were also asked about their emotions related to this body part, as well as how they thought other people perceived it.

After this, they were presented with the 3D avatar, adjusting it to resemble their own bodies. Finally, the participants’ actual measurements were taken and compared to sizes they had estimated on the avatar, Feusner said.

Based on the 3D component of the app, the study found that the models were more accurate overall in estimating their body sizes and shapes than nonmodels. Interestingly, nonmodels tended to underestimate their body sizes, Feusner said.

In a second trial of the experiment, users were asked to create models of their ideal bodies, Feusner said. He added that when people see a visual representation of their perceived body image, it may help them understand how it compares with their actual body.

Analysis with male participants is forthcoming, he said.

Somatomap is compatible both with web browsers and mobile devices. Although it is currently not available for public use, individuals may be able to use it in the future so researchers can collect information over a period of time, Arevian said.