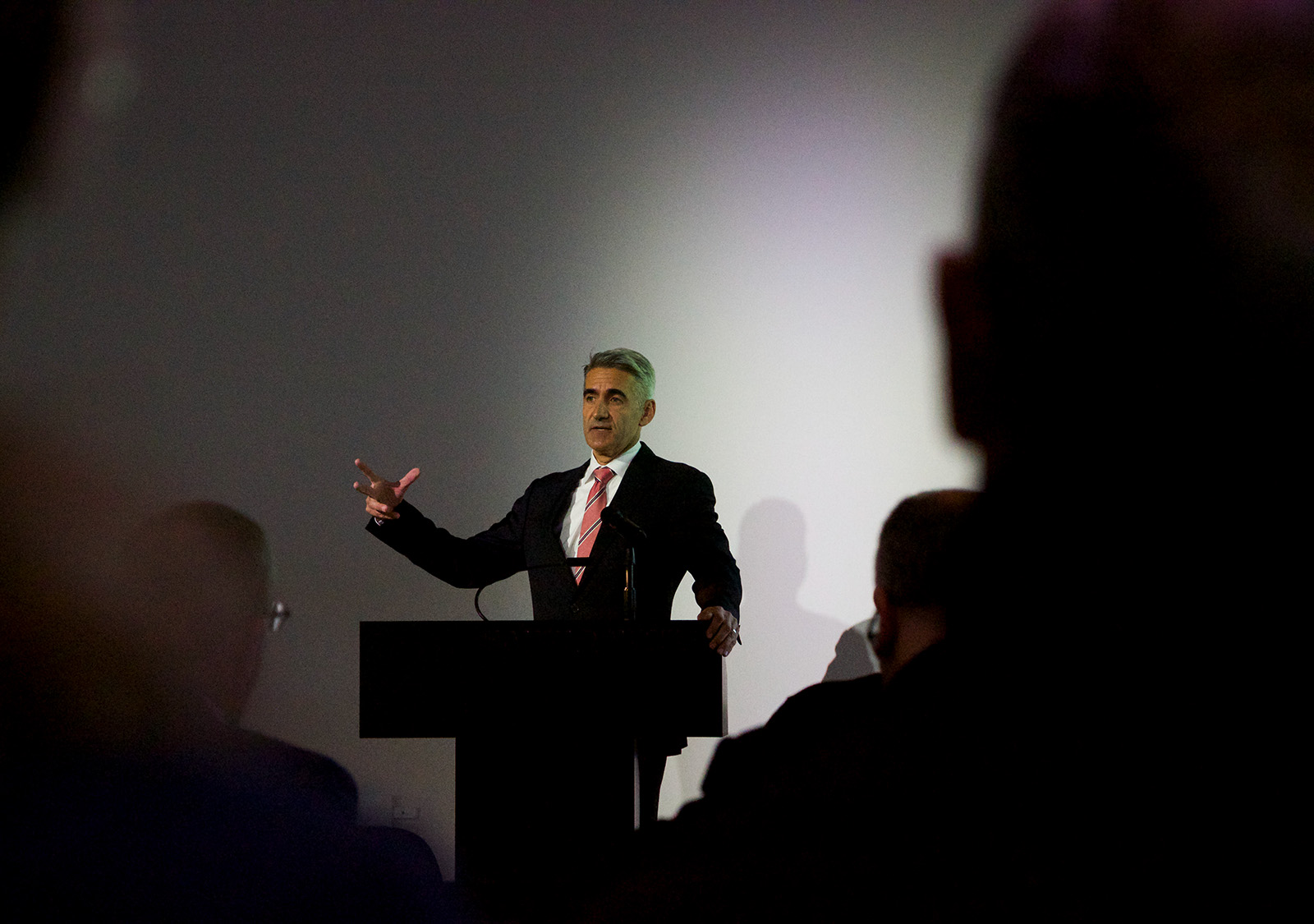 Correction: The original version of this caption misidentified Vince Bertoni in the photo.

Andrew Thomas, executive director of the WVIA, elaborated on the report at the WVIA’s annual meeting at the Hammer Museum on Thursday. Local stakeholders at the meeting discussed how Westwood Village should respond to increasing vacancy rates, new transportation services and climate change.

The WVIA is a nonprofit organization tasked with improving the state of Westwood Village, including its businesses and tenants.

Since last year, 17 new businesses have opened in Westwood and the WVIA has increased its homeless outreach services, Thomas said. According to WVIA’s annual report, 72% of budget allocations has gone to beautifying services, 15% to communication and development, and 13% to management.

Los Angeles City Councilmember Paul Koretz, whose district includes Westwood, addressed the increasing vacancy rate and the zoning regulations that are shaping the future business climate in Westwood. Thomas previously said that the vacancy rate is 21%.

“One of my top priorities is to have Westwood Village thrive as it used to when I was a UCLA student,” Koretz said.

Vince Bertoni, LA city planning director, gave the keynote speech at the meeting. On the topic of the increasing vacancy rate, Bertoni brought up the plight of retail shops that are struggling to find business and keep up with online retail giants, such as Amazon.

The meeting touched on Westwood’s zoning regulations, which Thomas said would create an added competitive disadvantage for opening businesses in the area. Hoping to amend the Westwood Village Specific Plan, the master planning document for Westwood zoning regulations, Thomas highlighted developmental regulations inherent in the plan.

“There’s no reason why we should have all this vacancy, yet still be turning businesses away who want to open up on our street,” Thomas said.

With the Metro Purple Line Extension to be built in Westwood, Thomas said its construction will seem uninviting and may become a threat to the business community.

“The Metro construction is a threat to our business community because of its impacts on Wilshire Boulevard,” Thomas said.

The Metro Purple Line Extension will open up two new stations in Westwood by 2026.

In order to mitigate the underlying effects of the extension, Koretz said he will review the Westwood Village Specific Plan.

City planning must adapt to climate change, Bertoni said in his speech. He added the effects of rising sea levels will threaten LA communities such as Venice in the future.

“We are at a point in time where we have to take seriously this issue of climate and how we’re going to address the climate,” Bertoni said.

Bertoni said LA should promote the use of transport alternatives, such as bus routes, trains and electric scooters.

An essential part of Measure JJJ was the Transit Oriented Communities Affordable Housing Incentive Program, which reduced parking requirements for units within the proximity of transit stops.

The LA Department of City Planning created a community liaison program in April 2018 to facilitate communication between community members and policy planners, Bertoni said. A better understanding of city planning from community members could aid the department, he said.

“The whole idea is that we want to make sure that planning is more accessible to people,” Bertoni said.

Thomas also gave an update on the construction of a pedestrian plaza on Broxton Avenue, which he said hopefully will be finished by 2020.

In closing the keynote, Bertoni touched on the robust conversations he has had with Westwood’s community and the historical values that its members have to uphold.

“We need to have an honest dialogue on Westwood – where have we been in the past and where do we need to go in the future,” said Bertoni.