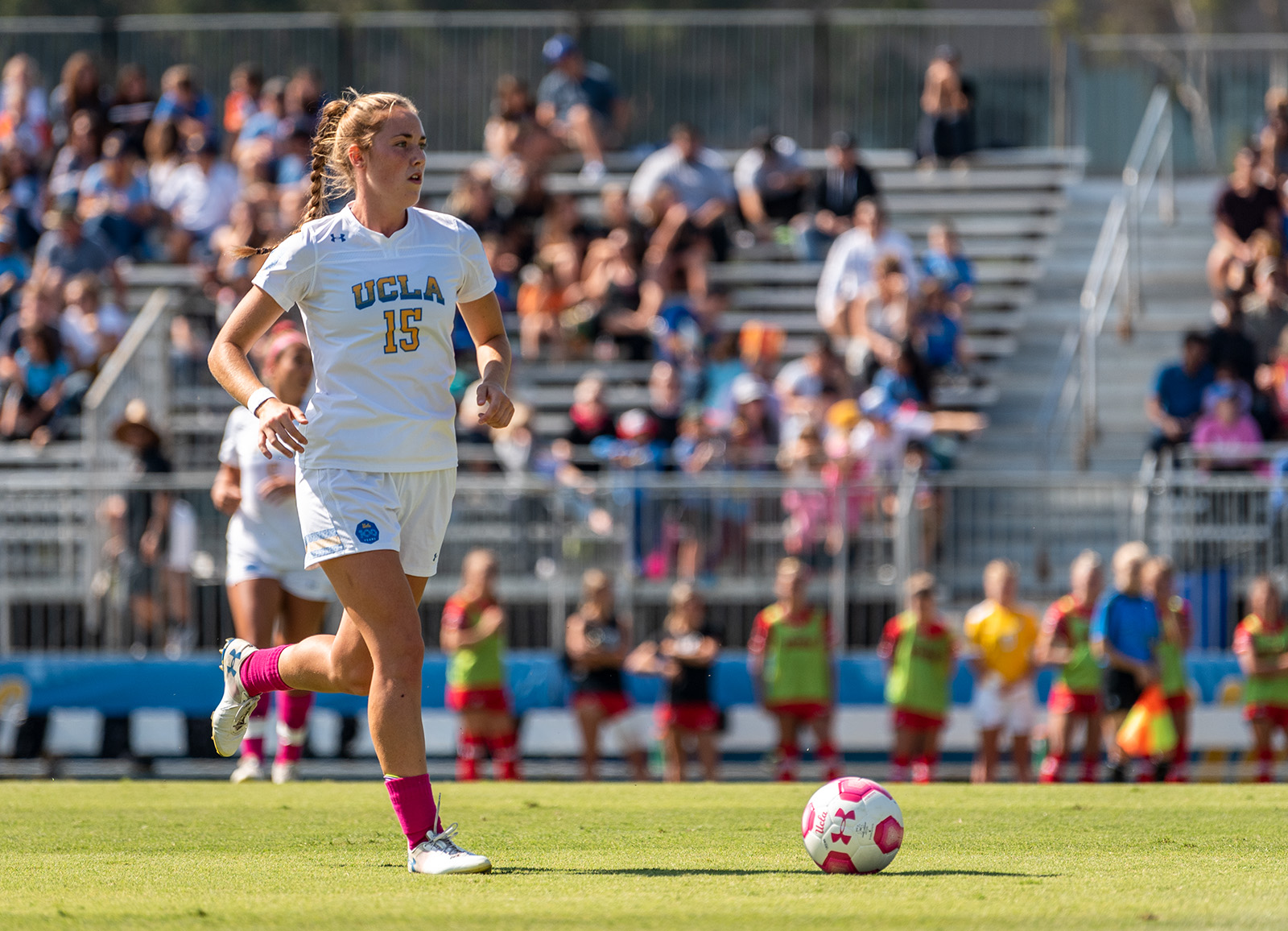 Junior defender Lucy Parker scored her second goal of the season on a corner kick for No. 13 UCLA women’s soccer. The goal was the Bruins’ only score in their win over Oregon on Sunday afternoon. (Joy Hong/Daily Bruin senior staff)

The Bruins have matched their longest winning streak of the season.

“I think we did a really good job in the first half of playing how we wanted to,” said redshirt senior forward Anika Rodriguez. “But I think we could’ve done a little bit better job in the second half of picking our chances and putting them more on frame than we did.”

UCLA maintained possession in Oregon territory early but did not get a shot off until the 12th minute, when freshman forward Mia Fishel drilled a ball right to goalkeeper Katelyn Carter. UCLA got another shot on goal two minutes later, but Carter stopped it once again.

Junior defender Delanie Sheehan had back-to-back chances to break the scoreless tie in the 20th minute. After her header sailed over the crossbar, Sheehan’s breakaway shot from outside the box was blocked by an Oregon defender 38 seconds later.

The Bruin defense kept the Ducks from seeing many chances to score, as Oregon’s only chance of the first half came in the 15th minute. Midfielder Chardonnay Curran got an open look in the Bruins’ box, but junior defender Lucy Parker was able to intercept the shot.

Parker later came through for UCLA at the other end of the field when she scored a goal in the 25th minute.

Junior forward Ashley Sanchez received a short pass on a corner kick from Rodriguez and sent a high cross to Parker, who tapped it past a group of Oregon defenders for her second goal of the season.

Parker said the goal was especially satisfying because it came on a corner kick – something she said the team has been practicing repeatedly recently.

“Obviously, it became a problem that we were having a lot of set pieces and we weren’t converting any of them,” Parker said. “It’s something that we really did focus on in practice.”

The Bruins continued to pressure the Ducks on offense, taking five more shots and four more corner kicks to close out the first half. UCLA added another eight shots in the second half, including three shots on goal, but it failed to extend its lead.

“I think we got a little stagnant in the second half and didn’t make them chase as much,” Cromwell said. “We need to be more aware of how we’re creating and what spaces become open. I think we missed some key passes that would’ve set someone up for a pretty simple finish.”

Oregon finally got a shot on goal in the 68th minute when forward Ally Cook gathered the ball in the box and sent a shot that bounced right to senior goalkeeper Teagan Micah for her first save of the game. Micah stopped another shot on goal about 10 minutes later – the Ducks’ final scoring opportunity of the game – to seal the win for the Bruins.

UCLA has now won seven of its last eight games after losing two of its first three games to start the conference season. The Bruins have also won back-to-back road games for the first time this year.

“We have great momentum right now,” Cromwell said. “We are always looking to peak in the postseason and I think we have that going for us right now.”