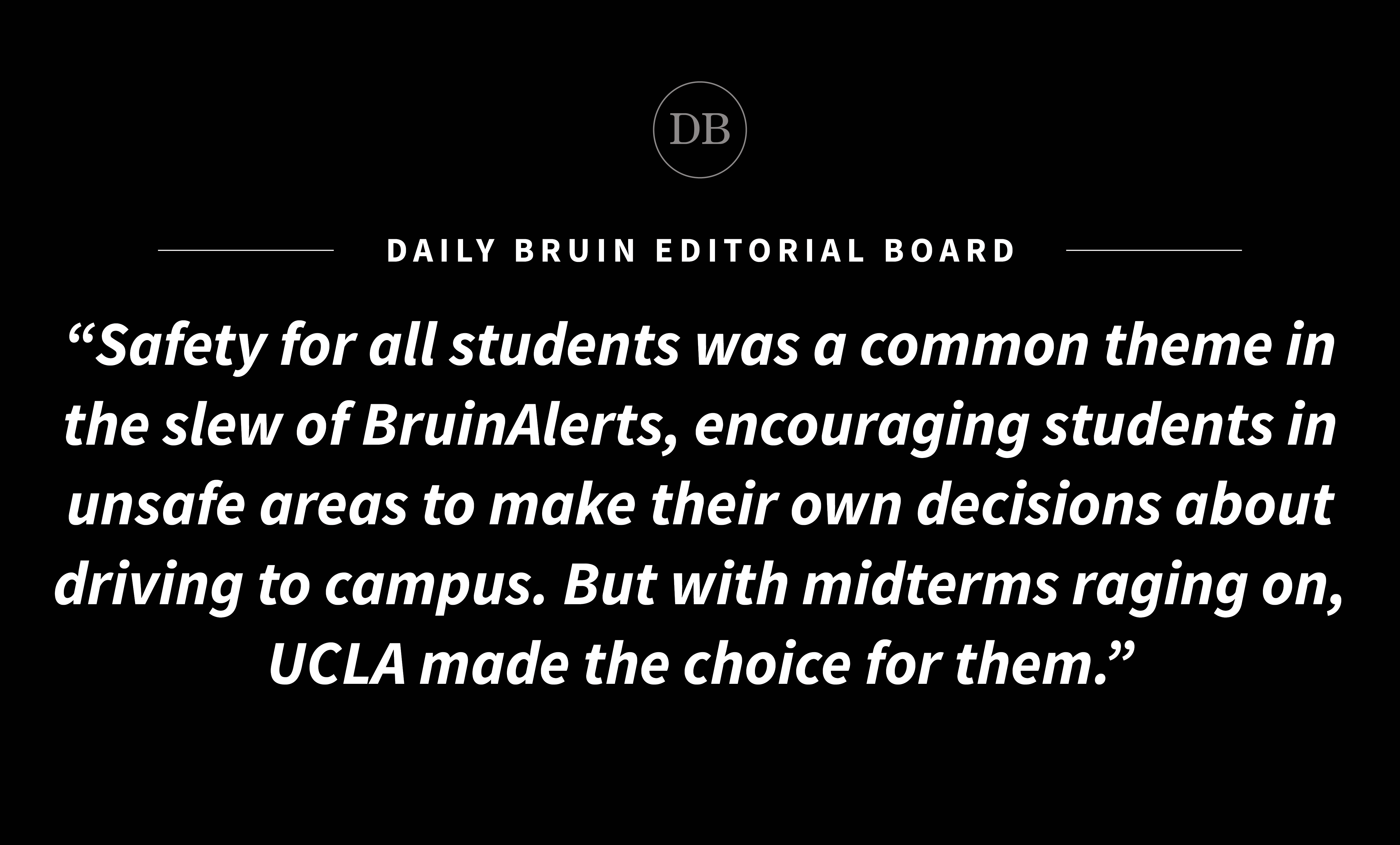 Emergency alerts of a nearby fire lit up students’ phones throughout Westwood apartments and UCLA dorms around 4:30 a.m on Monday, Oct. 28.

But for some Bruins who don’t live near campus, the blaze had already hit home.

UCLA decided to cancel classes that day after students spent hours wondering where the Getty fire was headed and how the university would respond. According to a 9:15 a.m. BruinAlert, the cancellation was prompted by the concern that commuter students and faculty may not have been able to get to campus as a result of freeway closures or living around evacuation areas.

But in the days to come, it became clear that commuter students were not the university’s priority.

The Getty fire continued burning in the days that followed, as powerful Santa Ana winds threatened to spark more flames in surrounding areas. Many of the 405 Freeway onramp and offramp closures that began Monday remained in effect until Thursday.

But still: Out of sight, out of mind. On Tuesday, once the fire was no longer visible from campus, UCLA resumed classes, picking up where it left off with midterms and lectures – and ignoring the fact that many commuter students were still unable to make it to campus. So, while some students on campus hoped for their midterms to be canceled, others off campus hoped their homes wouldn’t burn on their way to unavoidable tests.

Given UCLA’s competitive nature, the lack of universal BruinCast and many professors’ commitment to a no-makeup exam policy, many of those students may have been forced to ignore their safety and existing road closures to drive to campus anyway.

Safety for all students was a common theme in the slew of BruinAlerts, encouraging students in unsafe areas to make their own decisions about driving to campus.

But with midterms raging on, UCLA made the choice for them.

The university should have at least canceled class on the Tuesday following the fire’s initial outbreak, giving commuter students more time to prioritize their well-being without worrying about falling behind in classes or missing vital exams.

Many aspects of the Getty fire and UCLA’s response were reminiscent of the 2017 Skirball fire – a response this board has previously criticized. While the university has improved its communication since then, it has only sent 12 BruinAlerts throughout the time the fire has been near campus this time around. It didn’t clarify potential evacuation plans, and BruinAlerts contained little to no tangible information about the fire and its development.

As soon as a fire hits, knowing the specifics of where it’s headed, what the immediate threats are and where people should go if they need to evacuate are crucial. These are all concerns UCLA failed to immediately address.

Most importantly, though, it left commuter students in danger.

For a university that prides itself on safety and community, the lack of consideration for students who didn’t have an option of whether to come to campus was unacceptable.

Fires are inevitable in Southern California, so the least UCLA can do now is prepare to communicate efficiently and consider the circumstances of every Bruin, on and off campus.

Because UCLA has a responsibility to all of its students, regardless of what side of the 405 they live on.