Thanks to distance and high price, not all parents can make it to family weekend 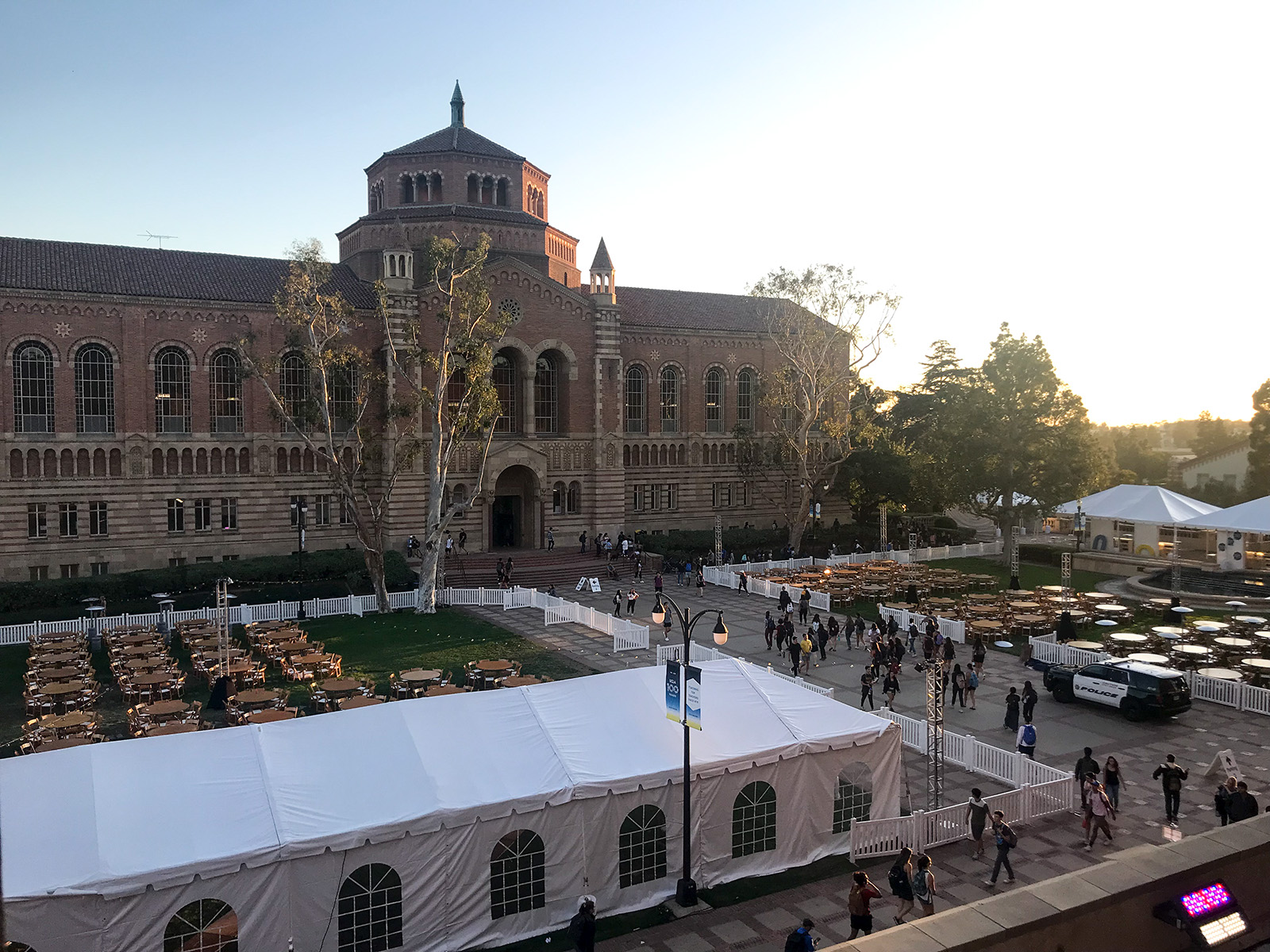 Bruin Family Weekend is meant to be an on-campus celebration with students’ families, but its financial and geographical inaccessibility prevents many from participating in its events. (Kristie-Valerie Hoang/Daily Bruin senior staff)

Another year’s spectacle that is parents aimlessly trying to navigate the dining halls – also known as Bruin Family Weekend – has passed.

And with it went a sense of community for everyone whose parents weren’t there to stumble around campus – not to mention a substantial amount of money.

Bruin Family Weekend is a three-day event put on by UCLA to welcome students’ families to their children’s new home. With a $95 price tag per nonstudent attendee, the event is huge, ranging from a Gene Block speech to a full tent and dining table setup in Dickson Plaza. Suffice it to say the university keeps itself busy during the weekend by hosting 5K races, lectures and tours.

So busy, in fact, that it seems to have misplaced its responsibilities to the rest of its Bruin family somewhere in the blue and gold confetti.

UCLA loves some good advertising, but it shouldn’t come at the cost of excluding low-income, out-of-state and international families. Bruin Family Weekend is not only financially and geographically inaccessible, it serves to further exacerbate rifts within the social communities of students within UCLA by only allowing those with wealth and access to attend. Now, it has morphed into a vague homage to the Bruin community – a community that further estranges a large portion of its members via events like these.

And for all the money spent on creating a family, you’d think the university might want to focus those funds toward the communities that are already here.

Ricardo Vazquez, a UCLA spokesperson, said Bruin Family Weekend fees are largely subsidized by the university – especially for families of students within the Academic Advancement Program.

“The total cost of Bruin Family Weekend this year was approximately $750,000, which does not come from state funding,” Vazquez said in an email statement. “Attendee registration fees covered approximately $175,000 of that.”

But no amount of subsidy seems to justify the remaining $575,000 of university funds – especially not for tents and speeches.

And even though it might not seem like a lot, the university isn’t in a position to be shying away from extra cash.

While UCLA is busy making a Bruin family, their scholarship fundraising is dwindling. Meanwhile, rising tuition goes toward an obscene number of balloon arches. And while the funding for Bruin Family Weekend won’t cover a generation of learners, it could help them out.

At the very least, it wouldn’t make Bruins feel that they aren’t part of a community they might already feel distanced from.

Alec Radtke, a second-year year civil engineering student from New York, said he doesn’t mind Bruin Family Weekend, but it can be frustrating to see what the money is going toward.

The university profits fearlessly off branding that insinuates a greater connection to the community dependent on the presence of family members. But on the underside of that sentiment lies a different assumption – those who cannot have their family here are subsequently less included within the community.

And geographic distance isn’t the only barrier to the self-proclaimed Bruin community.

Financially, Bruin Family Weekend remains inaccessible. Between the fees associated, travel costs and housing arrangements, coming out for three days can ring up in the thousands of dollars. So not only is potential scholarship funding redirected, but it’s diverted from those who often can’t attend the event in the first place.

And with around 55% of UCLA’s student population on some sort of financial aid, Bruin Family Weekend touts more exclusivity than meets the eye.

“I think it’s just nice to feel the community of UCLA,” Marci Steelman said. “It’s fun to see all the parents walking around as well, and to not be the only parent.”

But if UCLA wants a Bruin family, they need to create something accessible to everyone. At its core, the weekend fails those students looking for a community and family miles away from their own. Meanwhile, low-income students could feel more than just rejected from the picture-perfect Bruin family – they’ll feel like they can’t afford to be a part of it.

Bruin Family Weekend isn’t a bad idea in theory. And granted, bringing parents to see their kids in college is, by some measures, relatively wholesome on the UCLA scale. But outside of the blatant digs for alumni donations and the extravagant setup, it’s the execution and consideration that are lacking.

If the university is looking for a community that feels more unified, they might consider giving a more diverse range of economic and geographic voices a chance through scholarships and support instead of a fully catered dinner featuring Gene Block.

It never seems like a bad idea to bring families together.

But until UCLA considers the flip side of that sentiment, it will only serve to tear the Bruin family apart.