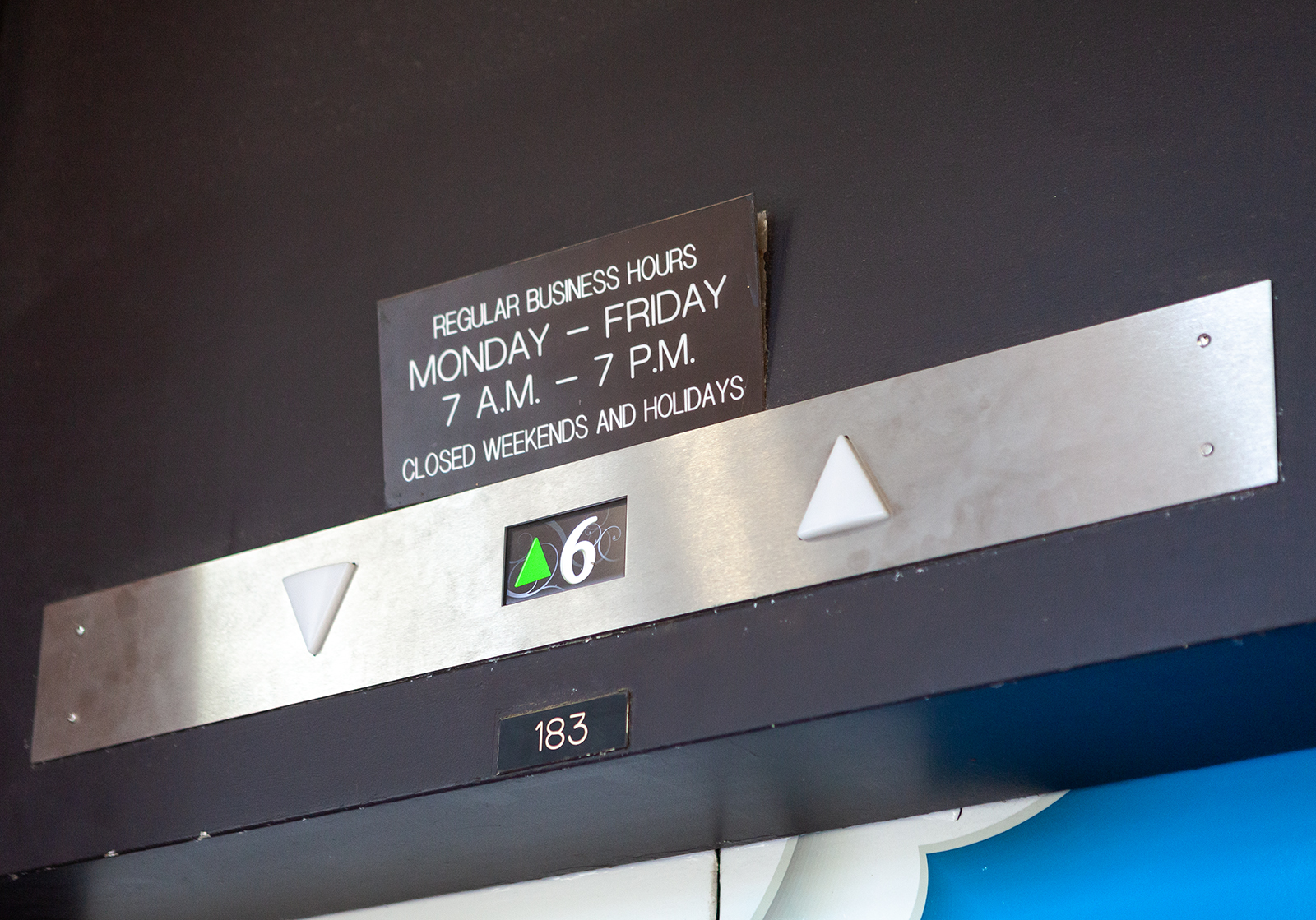 The Bunche Hall elevators run from 7 a.m. to 7 p.m. at night. This has caused an issue for student representative Lily Shaw who uses a wheelchair and has class in the building until 7 p.m. (Mia Kayser/Daily Bruin staff)

Lily Shaw, a student government representative, said she left her discussion in Bunche Hall early to ensure she would make it to her meeting at 7 p.m., but when she arrived at the elevator, it had already been locked.

Shaw, who uses a wheelchair and has class in Bunche until 7 p.m., has run into issues with the building’s limited running elevators multiple times now.

Shaw said she immediately called UCLA Facilities Management and was told it would take a while to receive help since the mechanic on duty was aiding another student who was trapped in an elevator.

“I asked (Facilities Management) if it was a joke because I was so shocked and outraged,” said Shaw, a fourth-year political science student. “I know my rights and I know the rights of our students, and UCLA has been in clear violation of these rights.”

A janitor eventually opened the elevator but Shaw was 30 minutes late to her meeting. Shaw is the Undergraduate Students Association Council Facilities commissioner.

Bunche Hall’s elevator has limited hours, meaning it is only available during business hours, which is 7 a.m. to 7 p.m. on weekdays and closed on weekends, according to a sign above the elevator.

Fahizah Alim, the director of communications at the California Department of Fair Employment and Housing, said in an emailed statement that since Bunche Hall was technically closed, limiting elevator hours does not constitute a violation of accessibility laws.

“(The university) doesn’t have to have (elevators) open for people with disabilities if they are closed to everybody else, unless there would be some circumstances that this would be the only accessible location for a program, service, or activity that the University provides,” Alim said.

The only elevators on campus with limited hours are the elevators in Bunche Hall and in the tennis center in order to prevent intruders and after-hours vandalism, said Nurit Katz, executive officer of Facilities Management, in an email statement.

If the elevator is reported broken after hours but there is not an immediate need for repair, it will be classified as an “urgent” maintenance issue and will get checked within 24 hours, Katz said. The repair completion is dependent on the scope of the required repair, she added.

Another incident occurred the previous week when Shaw had a staff meeting in Bunche Hall that ended at 9 p.m. By the time Shaw left the meeting, the elevator was locked. Shaw and her staffers called Facilities Management but no one answered the phone. Eventually, Shaw was able to find a janitor with a key to the elevator.

“We were very lucky to actually get out of the building,” Shaw said.

Shaw added her chief of staff had asked the events office in advance if Bunche Hall was compliant with the Americans with Disabilities Act and the office had confirmed that it was.

“(The incident) in and of itself isn’t a violation, but it’s a lack of communication that led to the violation,” Shaw said.

UCLA law lecturer Claudia Peña said since UCLA is a public institution, it falls under the jurisdiction of Title II of the ADA, which states that accessibility to programs and services needs to be ensured so that individuals with disabilities accessing a public entity can have the same experience as everyone else.

However, there is no law that says every single elevator must be in working condition, as long as there are alternative ways to access facilities, Peña said.

“It depends on what the other access ways are to determine whether there’s an actual violation of the ADA,” Peña said.

Along with these occurrences at Bunche, Shaw said she has not been able to access her office on the third floor of Kerckhoff Hall multiple times in the past week due to elevator repairs. During her second year, she was unable to turn in assignments to a teaching assistant who had an office on the second floor due to a long-broken elevator in Campbell Hall. She added she has struggled to get to class on time because of the elevator in Ackerman Union being constantly broken or at capacity.

Shaw said she thinks the administration needs to stop trying to shift the responsibility onto the state department to ensure elevators are in working condition. The university must provide access to students before, rather than after, student outrage, she added.

“There needs to be accountability,” Shaw said. “UCLA is not blameless in this.”