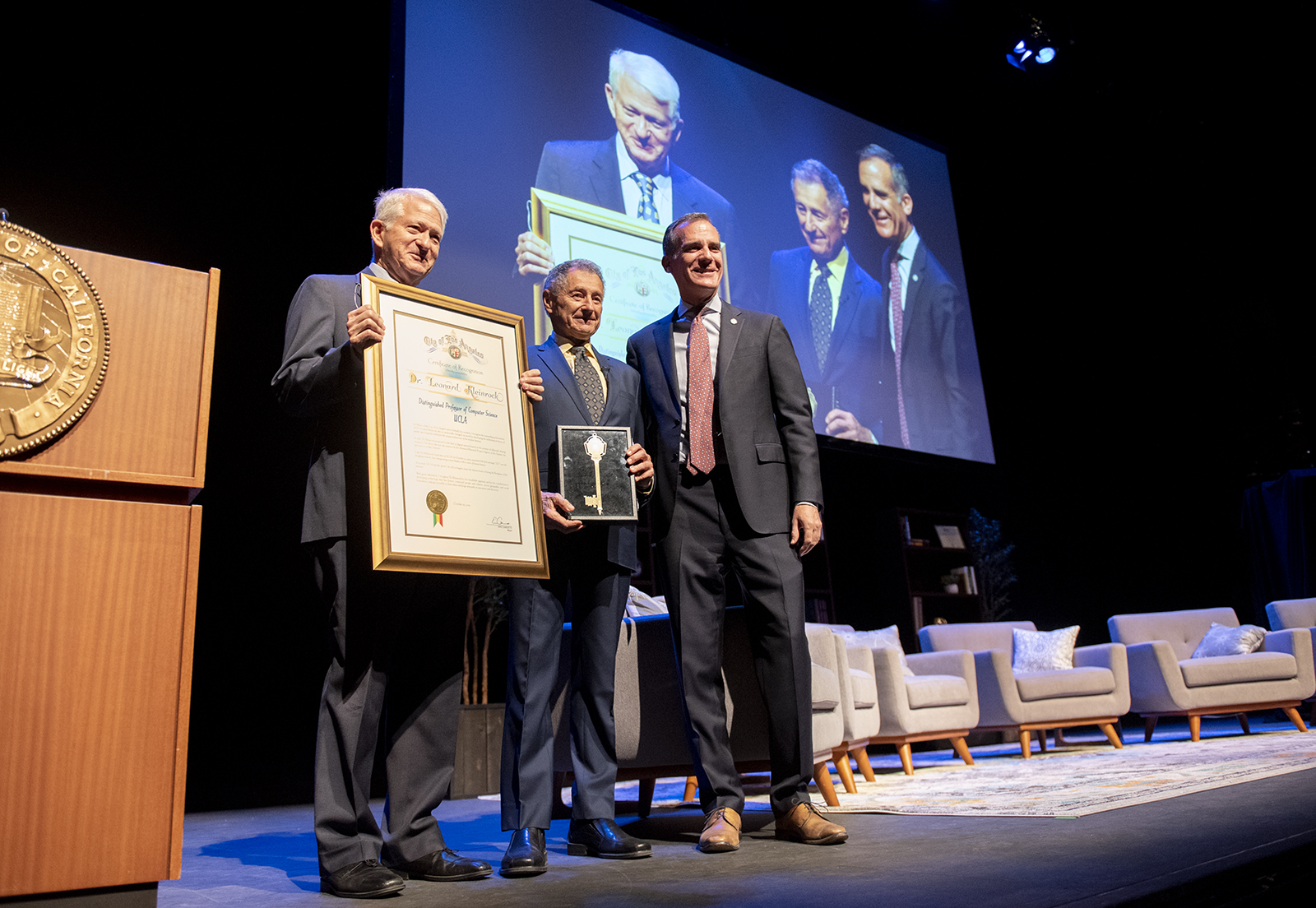 Mark Cuban, Jameela Jamil and Ashton Kutcher were among the many noted speakers that celebrated the 50th anniversary of the internet with UCLA on Tuesday.

Tuesday marked the 50th anniversary of when graduate student Charley Kine, working under UCLA distinguished computer science professor Leonard Kleinrock sent a data transmission over a computer network, laying the groundwork for what later became known as the internet.

The UCLA Samueli School of Engineering hosted Internet 50: From Founders to Futurists, a daylong event which recognized Kleinrock’s achievement.

After an introductory statement by Kleinrock along with event host and journalist Patt Morrison, Chancellor Gene Block invited the audience to reflect on the past and ponder what the future will bring.

“Marketing these moments will allow us to look back at our past, but more importantly they inspire us to try to imagine our future,” Block said.

Los Angeles Mayor Eric Garcetti then spoke, quoting Robert Kennedy: “Some men see things as they are, and say why. I dream things that never were and say why not.”

Garcetti related it to Kleinrock and the people of LA.

“It’s certainly the spirit that is imbued throughout the history of this city, Los Angeles, a city that embodies creativity and innovation, a city strengthened by the most diverse communities in human history,” Garcetti said.

Garcetti then invited Kleinrock back on the stage and presented him with a key to the city.

The series of panels was not all celebratory. Indigenous rights protesters interrupted the day’s second panel, “Winner Take All?”, which consisted of Jamie Dimon, CEO of JPMorgan Chase & Co., and Eric Schmidt, former CEO of Google.

Demonstrators accused Dimon of investing in “dirty energy,” such as fossil fuels, which they said damages indigenous communities and the environment.

Several panelists examined the effect of social media, a prominent development of the internet in the modern age.

While she said she loves the internet and social media, Jamil, famous for “The Good Place,” spends much of her career personally combating the dark side of the internet.

But the internet has also served as a platform for social movements, such as Black Lives Matter, #MeToo and March for Our Lives, Cullors said.

“The lost and forgotten (are) able to be seen and represented,” Cullors said.

However, Cullors added that the internet has also made it easier for people to profit off certain groups, even if they were unaffiliated with them, citing an instance where a man in Australia started a page similar to Black Lives Matter and earned a lot of money as a result.

“There’s a vulnerability on the internet,” Cullors said. “I think it on social media in particular, that I think at this moment, really is sinister. And we have to be present for that as well.”

Ohashi, whose gymnastics routine went viral online in January, said that the spread of information that the internet can catalyze is intriguing, but it promotes a disconnect between people and reality.

“My life kind of changed and it changed really fast,” Ohashi said. “But then there’s this huge disconnect, because we’re so used to having conversations with people. And now, no one has to listen on the internet.”

Artificial intelligence is as impactful as any other technology, but requires heavy oversight to ensure proper use, Cuban said.

“More data can make you smarter, but it can also work against you,” Cuban said. “Unless you understand how to choose the right data … your (artificial intelligence) is going to be an abomination.”

A large question throughout the event was the question of whether technological innovation has begun to slow.

Kleinrock moderated a debate between Paypal co-founder Peter Thiel and co-inventor of Ethernet Bob Metcalfe over whether innovation has stalled.

“All the low hanging fruit has been picked, all the easy ideas were discovered,” said Thiel, who said that innovation has stalled. “We can find a way to the future. … It’s really up to us to find a way back.”

Daniela Rus, a professor of electrical engineering and computer science at the Massachusetts Institute of Technology, said she expects artificial intelligence to grow significantly in the future, in a panel discussing the role of the internet in future technology.

“I believe we will have a future where machines will adapt to us,” she said.

Henry Samueli, co-founder of manufacturing company Broadcom and UCLA electrical engineering professor, said although there is less room for technological innovation now than in past years, there is great potential in future applications of the internet.

“There isn’t a field or endeavor in the next 50 years that isn’t going to be impacted by internet and the applications of the internet,” he said.

Samueli said he believes that the rate of technological advancement is slowing. However, this will allow governments and other organizations to better handle the drawbacks of the internet, he said.

Garry Kasparov, chess grandmaster and activist, was one of the final speakers. He said there is a slowing rate of real internet-based innovation.

“Instead of celebrating a new Apollo 11, we’re celebrating the release of the iPhone 11,” Kasparov said. “What does that inspire other than the long lines outside of Apple stores, and a small bump in Apple’s stock price?”

In order to discover major breakthroughs, one must have impractical dreams, Kasparov said.

“Fifty years ago we had unrealizable dreams of what we would do once we have the technology to do it,” Kasparov said. “We had big dreams, we had our eyes on the stars. Today, with so much incredible technology … our dreams have become small, and our eyes are no longer on the stars. We have them, instead, on little screens in front of us.”