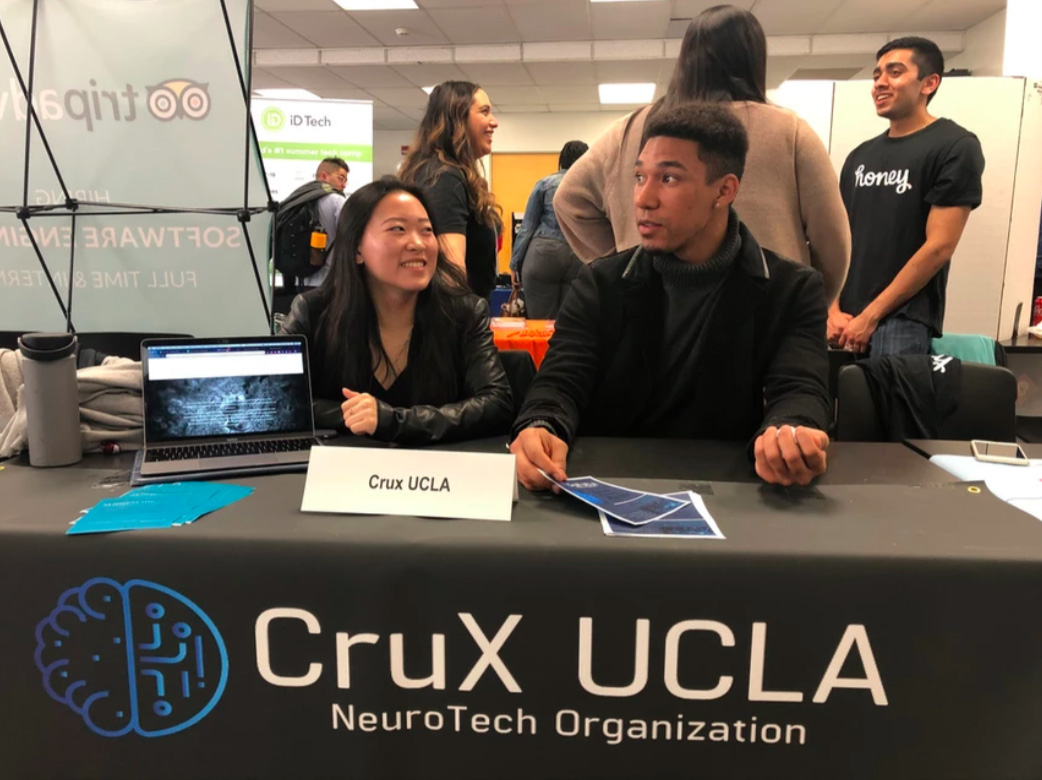 UCLA alumna Vicky Yuan (left) and Chris Hernandez (right) co-founded CruX, a student organization that combines neuroscience and technology to create hardware prototypes that translate brain signals into actions. The prototypes could be used to assist those affected by neurodegenerative disorders. (Courtesy of Laila Stedman)

A new student organization combines neuroscience and technology to assist those affected by neurodegenerative disorders.

CruX, which delves into the developing field of neurotechnology, creates hardware prototypes that translate brain signals into actions.

“It’s using technology not only to study neuroscience, but manipulate the things we learned about neuroscience,” said Shanaya Sidhu, CruX member and a second-year neuroscience student.

CruX started in spring 2018 as an alternative for students who wanted to become more involved in the field of neuroscience without pursuing graduate school or medical school.

“We want to provide other neuroscience enthusiasts with the creative outlet of another industry like … brain computer interface development,” said Laila Stedman, current CruX president and fourth-year neuroscience student.

The club works to make brain computer interfaces. These devices measure and interpret brain signals to carry out specific functions, such as moving a wheelchair with only the use of the mind, Stedman said.

The purpose of the competition was to create a useful brain computer interface system, Stedman said. CruX decided to create a machine that could help people with paralysis or other physical limitations.

“For people who are behaviorally unresponsive, such as in a vegetative state, you can’t really tell whether they’re not asleep because a lot of those people actually are conscious inside, they’re just not behaviorally responsive,” Sidhu said.

The club created a headset that measured alpha waves, brain signals corresponding to an individual’s relaxed state, Stedman said. Based on the number of alpha waves recorded, a light attached to the headset would turn on or off.

The prototype would be used to help those with paralysis turn off their electronic appliances at night prior to sleeping, Stedman said.

Starting from only a couple of board members and general members last year, CruX received over 80 applications to join their Brain Computer Interface competition team this year.

Members not accepted into the competition team were invited to join the project team where members could learn more about neurotechnology and gain experience. No prior skills are required in order to become a general member, Stedman said.

“We have worked so tirelessly this whole summer to restructure the club,” Stedman said.

Stedman said the club is open to students of all majors and is welcoming to anyone who has a passion for neurotechnology.

“The collaboration and teamwork in general is what makes it so unique,” Sidhu said. “Last year, the (BCI) team had a lot of issues with troubleshooting on their own. I think the fact that everyone is able to learn together and collaborate and kind of bounce ideas off each other is the most attractive thing about this for me.”

CruX faculty mentor Mayank Mehta said there is so much potential for careers in the field of neurotechnology.

“Right now there is an amazing amount of excitement, lots of jobs … from clinical application of (artificial intelligence), to engineering application, to pharmacology, treating Alzheimer’s disease, detecting all kinds of disorder, there’s a lot going on,” said Mehta, a professor of physics and astronomy, neurology and neurobiology.

Stedman added she feels people were attracted to CruX because of what the organization could do for its members.

“It’s like a Silicon Valley where people who know they are capable of creating the future, we can give them the space to do that,” Stedman said. “We’re the pioneers in a new industry and that’s what’s so exciting about it.”