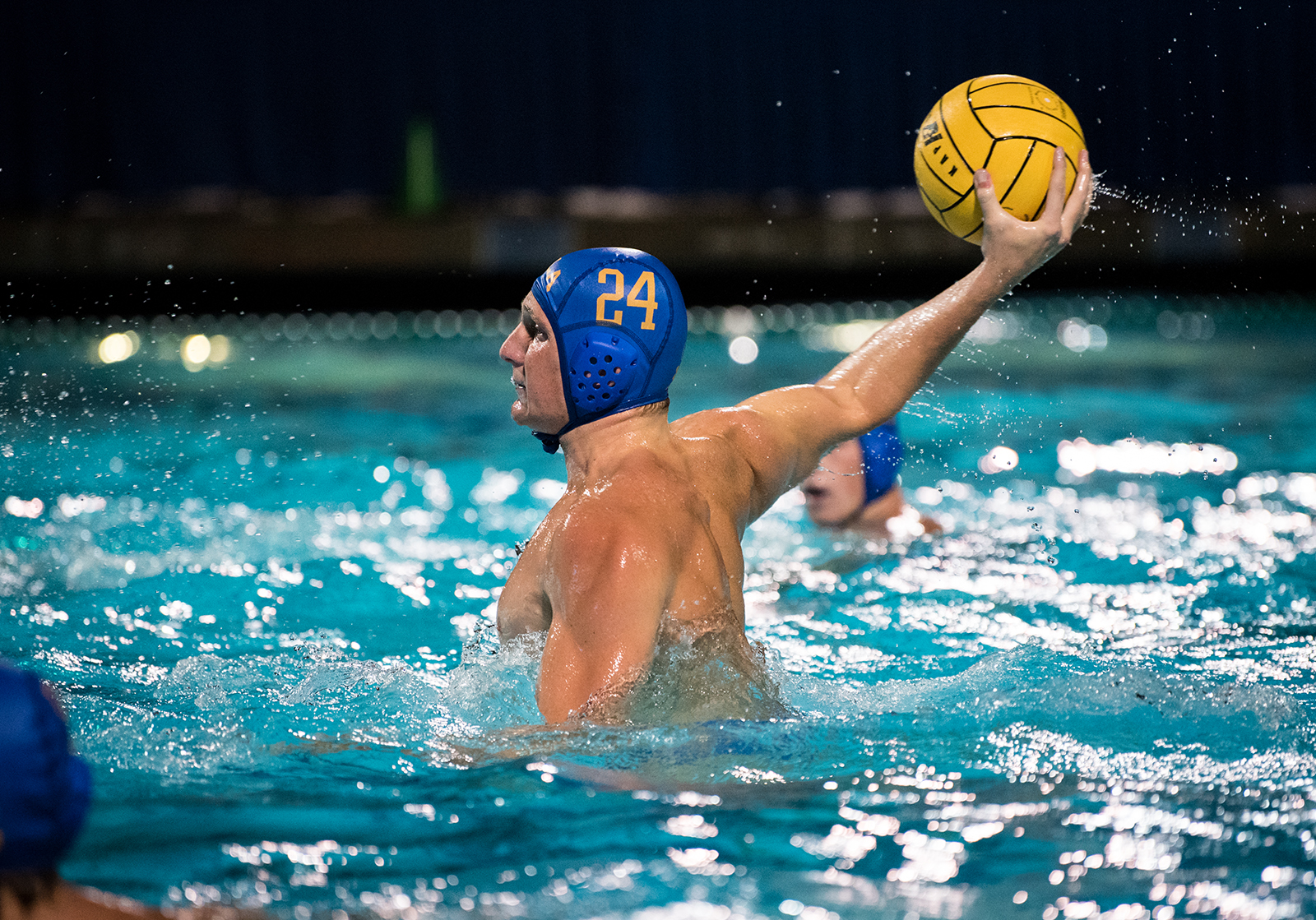 Freshman attacker Tommy Gruwell is UCLA men’s water polo’s fourth-leading scorer on the season and the highest freshman on the list. The freshman has also scored 13 first-half goals this season, including two in the second quarter against UC Irvine. (Liz Ketcham/Photo editor)

The saying goes, “It’s not how you start, it’s how you finish.”

But for the Bruins, the opening minutes of their games have been a key part of their success.

In its most recent match, No. 2 UCLA men’s water polo (15-1) jumped out to a 12-3 lead at the half over No. 14 UC Irvine (6-10) – the Bruins’ sixth consecutive halftime lead. UCLA has scored more than their opponents in 13 individual first quarters and 12 individual second quarters this season, losing both quarters only in their lone defeat to No. 1 Stanford on Sept. 29.

The Bruins have outscored their opponents by 33 goals in the first quarter and 32 goals in the second quarter on the season, but only are only +23 and +10 in the third and fourth quarters, respectively.

Freshman attacker Tommy Gruwell said the Bruins’ strong start helped UCLA against UC Irvine, but there’s no special plan of attack or emphasis to score early on in the game.

“We came out hot, and that helped us early,” Gruwell said. “But we try to play the same way with the same intensity the whole game regardless of the score. (In the first half,) we executed our plays well and that allowed us to start well.”

Recently, the Bruins’ offense has surged in the second quarter, notching five or more goals in each of the last six. UCLA’s 69 second-quarter tallies are 12 more than the Bruins have scored in the first quarter and almost double their fourth-quarter scoring output this season.

Coach Adam Wright said gaining an advantage early helps UCLA’s coaches because they can mix in different lineups early in games to see how they perform together.

“That first half really lets us see what kind of energy we’re going to bring that day,” Wright said. “We did a nice job today (against UC Irvine) as we’ve done at times this season. Early leads are important especially when we play a lot of different combinations of guys that we might not see every game.”

Sophomore attacker Jake Cavano leads the team with 16 second-quarter goals, almost a quarter of the team’s season output and more than half of his total goals. The second-year also sits atop the team in first-half goals, sitting second overall on the team in scores with 30.

“We’re not going to rely on one or two players,” Wright said. “We have to understand that our opportunities are limited, … and if we don’t have multiple guys ready to step up and score, we’re not going to be scoring (five or six goals) in those early quarters.”

But the most widespread Bruin scorer is sophomore attacker Ashworth Molthen. He leads UCLA with 32 goals – having scored no more than nine in any given quarter – and is the only Bruin with a double-digit tally in finding the back of the net in the second half. The left-handed attacker has also scored in 15 of the Bruins’ 16 contests.

Molthen said the early bunches of goals against UC Irvine helped the team create a good offensive rhythm to continue the rest of the game.

“We came out pretty strong,” Molthen said. “And we came out with a lot of energy. That really helped us score early and get up in the first quarter, which carried over to the next three.”

UCLA will begin Mountain Pacific Sports Federation conference play back at home versus No. 8 California on Saturday.