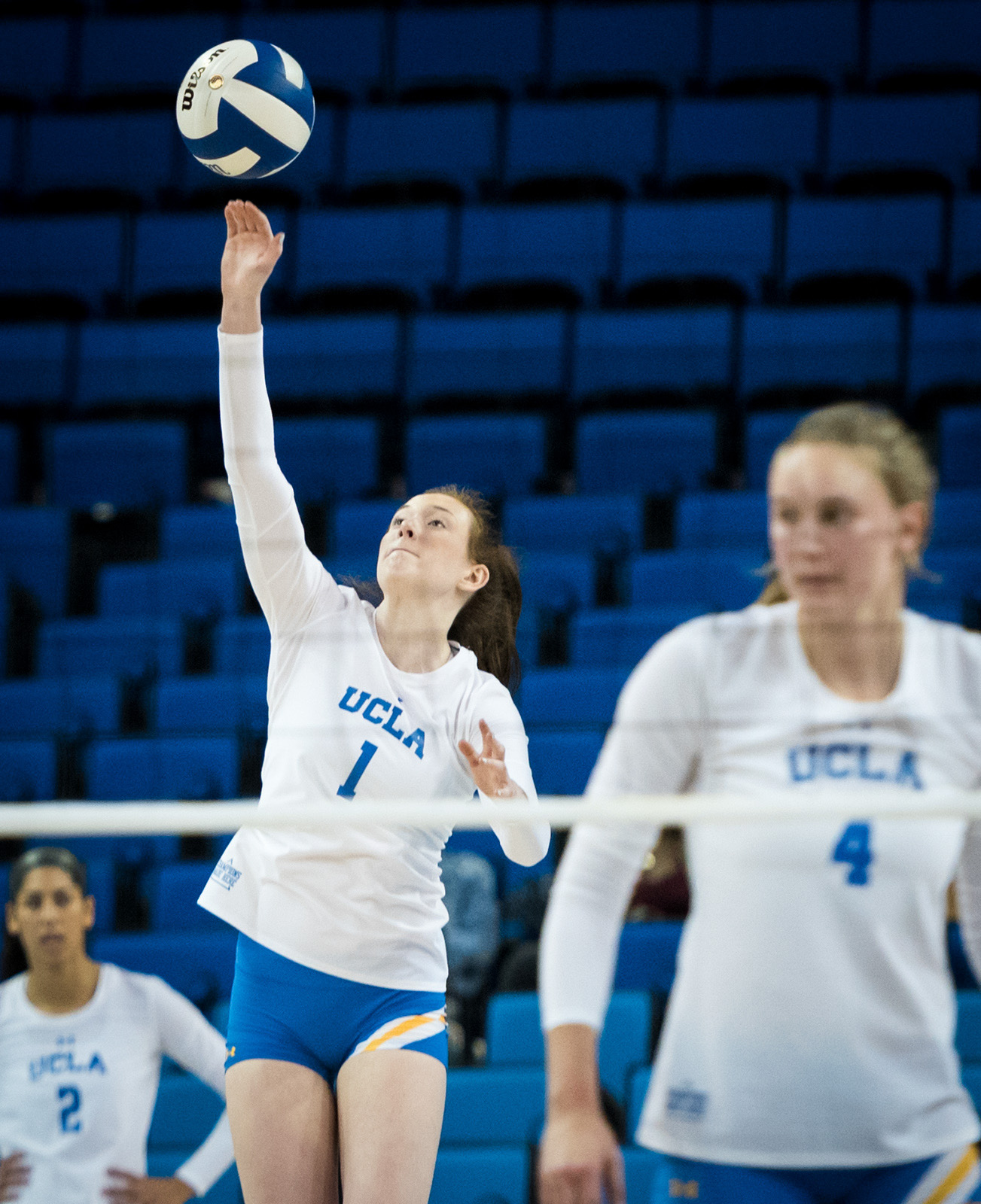 UCLA redshirt sophomore middle blocker Emily Ryan said the Bruins need to regain consistency in their play in order to stay in the race for the Pac-12. UCLA will face No. 2 Stanford and No. 15 California this weekend. (Tanmay Shankar/Assistant Photo editor)

Almost halfway through conference play, the Pac-12 is up for grabs.

UCLA women’s volleyball (10-7, 5-3 Pac-12) has had an up-and-down conference slate, as the Bruins have upset multiple ranked Pac-12 opponents but have also fallen to teams at the bottom of the standings.

Coach Michael Sealy said this inconsistency is not just something UCLA is experiencing this season, but it is actually indicative of the strength of every Pac-12 team this year.

“Everyone in the conference is dangerous,” Sealy said. “There is no bottom-dweller, there may be teams that have a bad record but they’re all talented and all really good.”

Last season, the conference title was a runaway for Stanford, which went a perfect 20-0 against conference foes en route to a national championship. The next best teams in the Pac-12 – Oregon and USC – both had 13-7 records in conference play, a far cry from Stanford’s output.

But this season, the Pac-12 hierarchy got shaken up in the first weekend of play.

Seven teams came into conference play ranked, but none of them survived their first two games without suffering a loss. Then-No. 24 Washington State defeated in-state rival then-No. 8 Washington, and then two days later the latter took down then-No. 1 Stanford for the Cardinal’s first Pac-12 loss since November 2017.

Washington State, then-No. 21 California, then-No. 18 Utah, then-No. 24 Oregon and then-No. 25 USC all suffered at least one loss on the opening weekend as well. This left the Bruins at the top of the conference leaderboard after they upset the Trojans in five sets and swept the Sun Devils four days later.

UCLA continued its first-place start with an upset sweep over Washington State the next weekend, but since then, the Bruins have gone 2-3, as UCLA has lost or been forced to five sets in two games against teams sitting at the bottom of the conference hierarchy.

“It’s really easy to get all fired up in a game against Stanford and Cal, but it’s the matches where you let yourself fall into the trap of thinking you’re supposed to win matches that set you up for a rude awakening,” Sealy said.

UCLA has played three of the worst teams in the conference over the last two weeks, and while the Bruins have come away with the win in two of those matches, they didn’t make it through that stretch undefeated.

UCLA faced Oregon – which had dropped from its previous top-25 ranking to just 5-10 on the season and 1-5 in Pac-12 play going into the game – on Oct. 18. The Bruins were unable to defeat the Ducks, losing in three sets.

Two days later was a match versus Oregon State, then-eighth place in the Pac-12, which UCLA had not lost to since 2007.

While the Bruins did win that match, it took five sets, even though the team was up 2-0 in the match. Redshirt freshman outside hitter Lexi Hadrych said although it took the Bruins five sets to beat the Beavers, the team was working hard to improve on its performance against the Ducks.

“After the Oregon match, we came together at practice, and we just made sure to keep talking, so we just need to keep that mentality as we go forward,” Hadrych said.

With games against No. 2 Stanford and No. 15 California scheduled this weekend for UCLA, redshirt sophomore middle blocker Emily Ryan said the Bruins need to get back to playing to the best of their ability in order to get back to the top of the conference.

“As long as we come in level-headed and we don’t think a game might be too easy based on a past game, and we come in like every game is going to be like the last, and maintain, we’ll get better,” Ryan said.