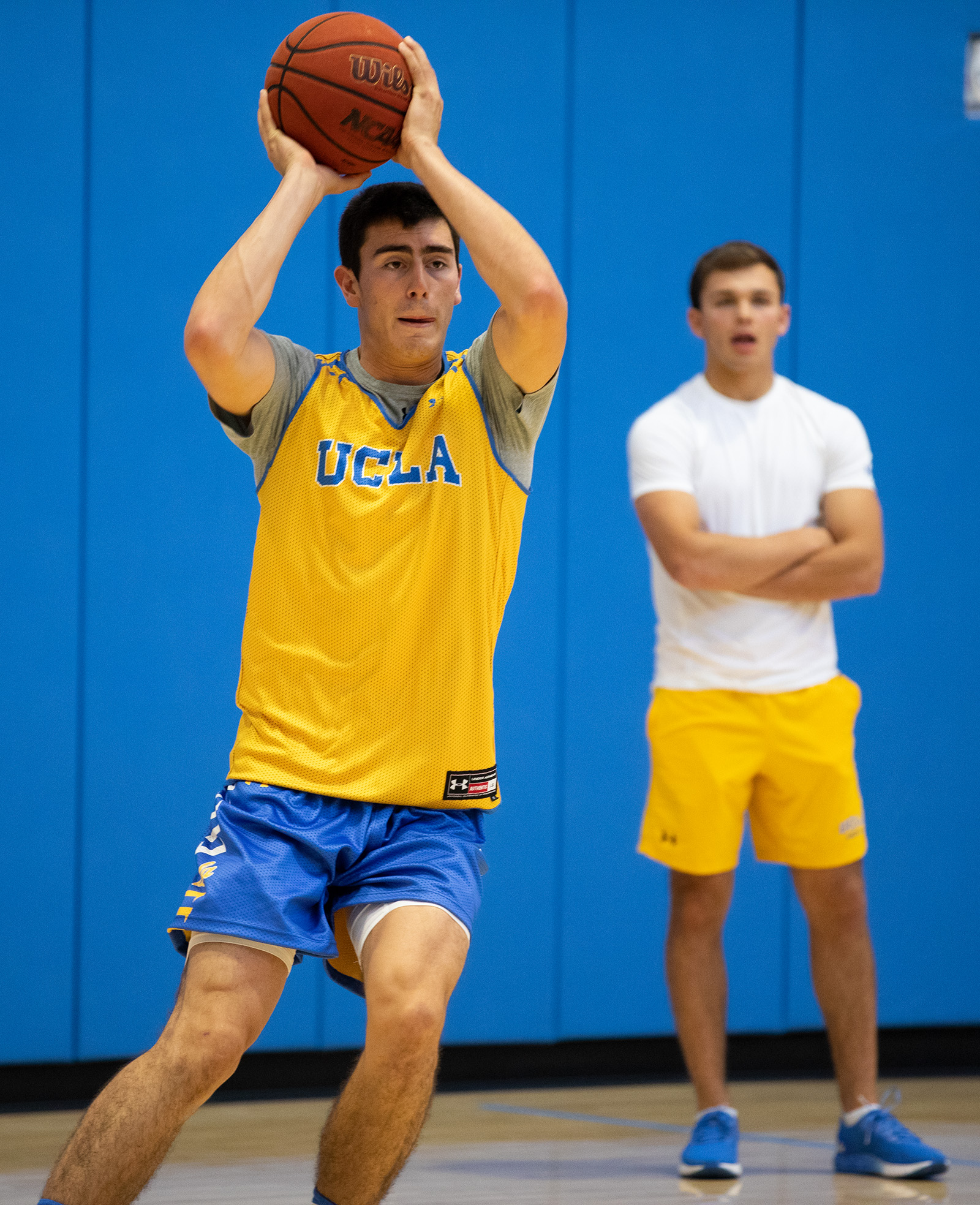 Freshman guard/forward Jaime Jaquez Jr. was a four-star recruit coming out of high school. Coach Mick Cronin attempted to convince Jaquez Jr. to play for him at Cincinnati before the wing committed to UCLA in May 2018 – 11 months before Cronin came to Westwood himself. (Ashley Kenney/Daily Bruin)

The Bruins may have played behind closed doors Saturday, but they’ll be in the spotlight come Wednesday night.

UCLA men’s basketball will be hosting its first-ever preseason showcase at Pauley Pavilion on Wednesday, consisting of a 5-on-5 scrimmage and several player-versus-student events. One of the events that won’t be happening, however, is a dunk contest, since coach Mick Cronin said it wouldn’t be much of a competition.

“I don’t know how many students can dunk,” Cronin said. “If they can, then we might have walk-on tryouts. Yeah, I would think more maybe like shooting, things that students can do – let’s hope the players win.”

One of the Bruins’ two freshman additions is guard/forward Jaime Jaquez Jr., who grew up less than 50 miles from Westwood in Camarillo, California. Jaquez Jr. said he is looking forward to making an early connection with the fans and that he is happy to see the team start a new tradition.

“I’m really excited; it’s the first time we’re doing something like this,” Jaquez Jr. said. “I’m excited to see the turnout from the fans and, you know, us getting up and down the court, so I’m excited.”

UCLA’s only other signee this past recruiting cycle was three-star guard/forward Jake Kyman, another wing from Southern California.

Kyman said he is excited to connect to Bruin fans early on in his career at the event Wednesday night.

“That’s what basketball is; it is entertainment,” Kyman said. “It’s nice to have people come out and watch, and give them a little show and learn a couple things and get ready for the season. It will be fun.”

When Jaquez Jr. was asked if he would take it easy on any students Wednesday night, he didn’t say what his intentions were.

But like most Division I teams, the Bruins hosted a smaller program for a secret scrimmage Saturday. The rumored opponent was Fresno State, but Cronin did not confirm if the matchup happened.

Cronin said UCLA had a good practice over the weekend that further prepared the team for the showcase and season opener Nov. 6.

The showcase will tip off at 7 p.m. Wednesday night.

Singleton back to practice

Sophomore guard David Singleton was the only Bruin not at 100% in UCLA’s first practice open to the media Oct. 10.

Seven months after breaking his foot in the Pac-12 tournament, Singleton is back to full participation.

“(My foot) feels pretty good,” Singleton said. “I’m recovering on my whole body, it’s not just the foot – (I’m) not focusing on the foot anymore.”

Singleton said he and the team’s training staff have worked on avoiding future injuries by completely changing how he makes cuts, jumps and even how he walks.

But while the guard said he was ready to go at full speed, Cronin said he doubted Singleton was truly back to 100%. The coach, however, credited Singleton’s shot-making ability, as well as his defensive prowess early on in his career – something he said he witnessed firsthand when UCLA and Cronin’s Cincinnati squad faced off last season.

“(UCLA) started the game with him on (2018-2019 American Athletic Conference Player of the Year) Jarron Cumberland, which told me they thought he was their best defender as a freshman in December,” Cronin said. “That says a lot.”