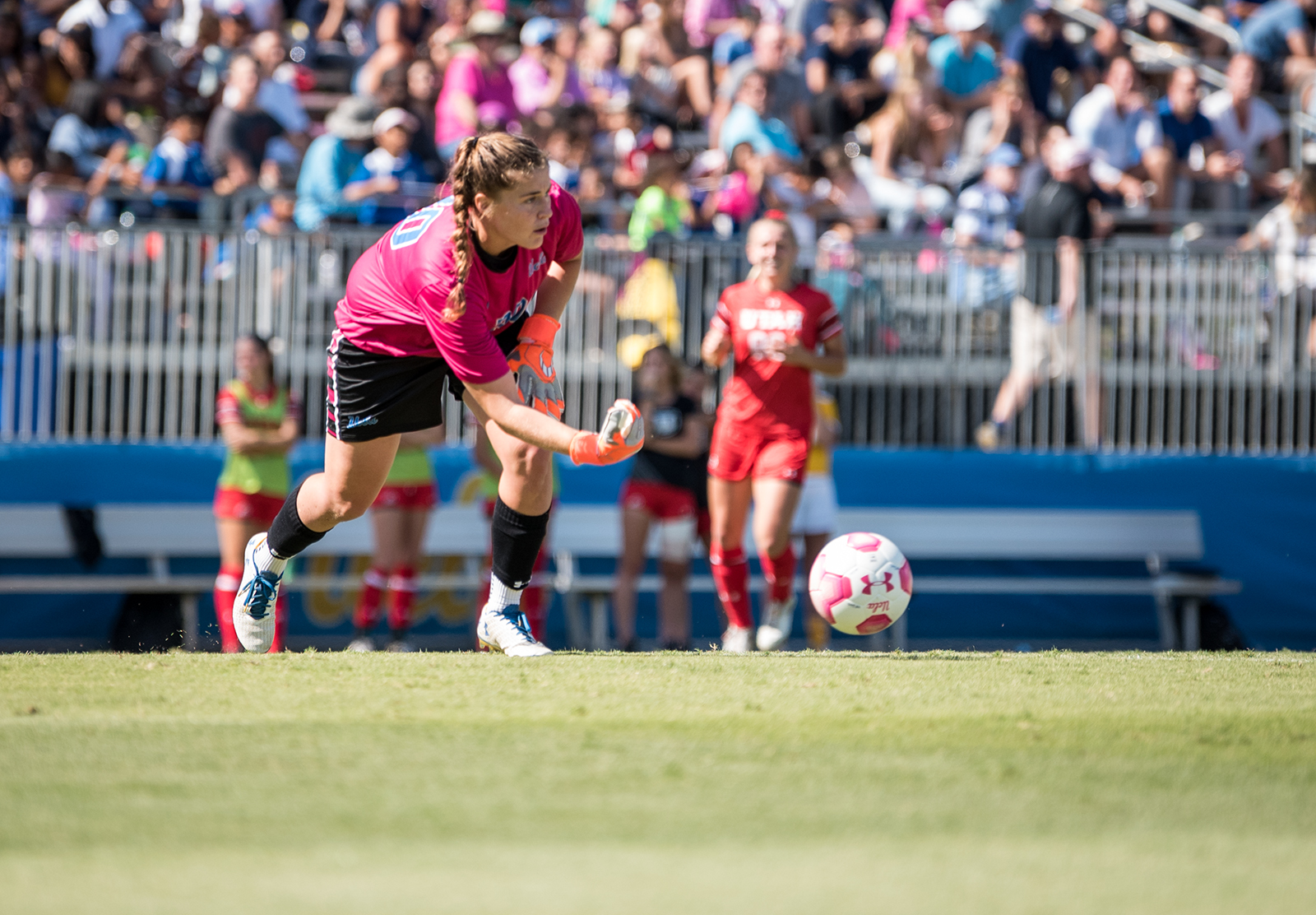 Senior goalkeeper Teagan Micah logged three saves in No. 16 UCLA women’s soccer’s loss to No. 2 Stanford. The only goal Micah allowed came in the 18th minute, when Cardinal midfielder Maya Doms headed in a rebound from 10 yards out. (Joy Hong/Daily Bruin senior staff)

Once again, the Bruins could not take down the Cardinal.

“It’s always frustrating to lose,” said coach Amanda Cromwell. “It’s not more or less frustrating because it’s Stanford. We just want to play well and be better for 90 minutes.”

The Cardinal attacked early, taking the first four shots of the game in 12 minutes, including a line drive by forward Catarina Macario that grazed the top of the crossbar and a shot from midfielder Maya Doms that the Bruins just managed to stop just front of the goal.

Doms put Stanford ahead on her second attempt in the 18th minute. After a high cross from the right wing and a series of volleys by the Cardinal, UCLA junior defender Delanie Sheehan attempted to clear the ball.

But Sheehan’s header was intercepted by Doms, who, from 10 yards out, headed the ball over the fingertips of senior goalkeeper Teagan Micah.

Micah continued to battle pressure from the Stanford offense, blocking a shot from Sophia Smith after the Stanford forward slipped past a group of UCLA defenders for a breakaway opportunity in the 33rd minute.

Meanwhile, the Bruins struggled to find scoring opportunities early on, taking just two shots in the first half.

“I think the team can still improve on being on the same page,” said freshman forward Mia Fishel. “We need to have a good mindset on both sides of the ball.”

The Cardinal came close to extending their lead early in the second half when Macario once again missed the goal frame by inches with another with a shot over the crossbar in the 55th minute.

The Bruins had a pair of chances to level the match in the 68th minute when Fishel saw back-to-back looks in the box. Fishel’s first shot bounced off the foot of a Stanford defender and went back to the Bruin forward, who missed high on her second attempt.

UCLA’s last scoring opportunity came in the 86th minute, when junior forward Ashley Sanchez found herself wide open in the box on a counterattack, but her shot sailed over the goal.

The loss marks UCLA’s third of the conference season, tying its most since 2016 with five games still left in Pac-12 play. Saturday’s game was also the first time the Bruins lost this season when they allowed only one goal. UCLA previously had a 4-0 record in such games.

Micah said while the loss is disappointing, it can be used as a learning tool moving forward.

“We need to remember that intensity that we just played in and apply that to training,” Micah said. “That was up another level – that’s like a final-four matchup. Moving forward, that’s how we need to play every single game.”