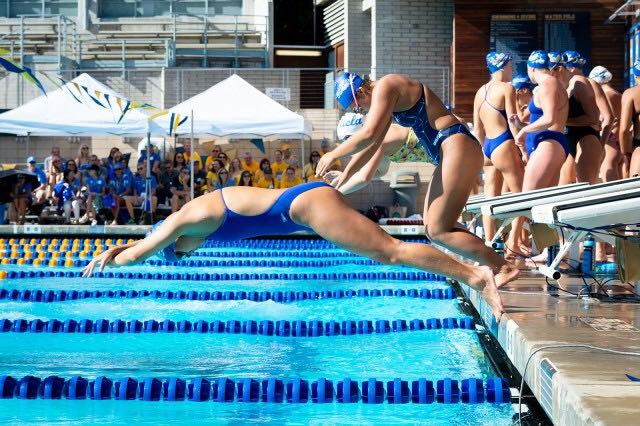 No. 23 UCLA swim and dive competed in its first home meet of the season this weekend, a dual meet versus Utah. The Bruins came away with a 177-84 victory. (Niveda Tennety/Assistant Photo editor)

“It’s a good place to start, because we are a newer team, and I think we need to build up to bigger competitors,” said freshman Sophia Kosturos. “And I think it was just kind of a learning experience, just because we’re new.”

The meet started and ended with a relay, with the UCLA A-team taking first place in both the 200-yard medley relay and the 400-yard freestyle relay.

Kosturos was another freshman who won multiple events, as she was part of the winning efforts for both of the meet’s relay races and also took first place in two individual races. Kosturos won both races by almost two seconds, finishing the 100-yard backstroke with a time of 54.39 and following that up with a first place time of 2:00.35 in the 200-yard backstroke.

“Freshman classes are super important because they actually define how the culture’s going to go,” said senior Kenisha Liu. “Having positive freshmen who are willing to put in the work is amazing, and obviously today they did a great job, so something’s working.”

But the freshmen weren’t the only Bruins to emerge victorious Friday.

Liu was part of both winning relay teams and individually won the 100-yard and 200-yard freestyle races. Senior Maisie Jameson finished right behind Liu in the 100-yard, while freshman Brooke Schaffer took second in the 200-yard.

UCLA’s only loss came in the the 200-yard breaststroke, but the Bruins still collected points in the race, as junior Emma Cain finished second.

Despite UCLA’s overall success at the meet, coach Jordan Wolfrum said the team is still rough around the edges and will improve as the season progresses.

“We have a ton of work to do, we’re a really young team, so we had a bunch of people where this was their first college dual meet,” Wolfrum said. “We were really good, but not amazing. … There was nothing there that was perfect, which is a really exciting place to be.”

The Bruins’ next meet with be a dual meet versus UC Santa Barbara at home on Oct. 25.