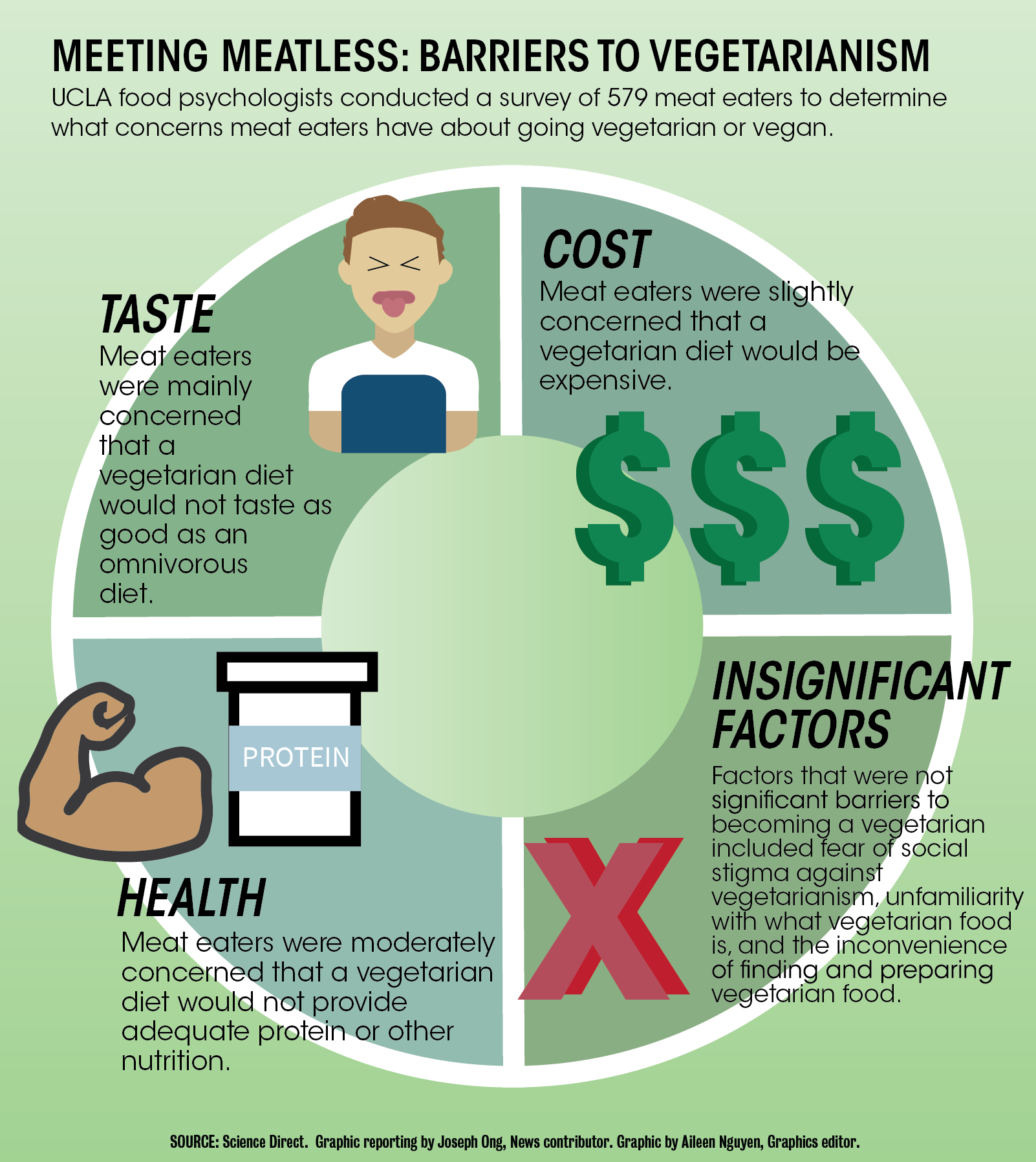 In a study published in October, UCLA psychologists determined taste and health concerns are major barriers to meat eaters when becoming vegetarian or vegan. These results contrasted a previous study that suggested meat eaters may fear switching to a plant-based diet because they are afraid of stigma from other people.

Vegetarians and vegans receive stigma and disapproval from friends, family and colleagues, said Daniel Rosenfeld, the UCLA study’s lead author and a psychology graduate student in the DiSH Lab, which studies the relationship between health and eating.

Although previous studies had documented stigma against vegetarians and vegans, no study had assessed how much this stigma affected a meat eater’s willingness to switch to a plant-based diet, Rosenfeld added.

The researchers surveyed 579 meat eaters to determine their barriers to becoming a vegetarian. Results found meat eaters thought a vegetarian diet would be less tasty, less healthy and more expensive than a meat-containing diet.

“Concerns that a vegetarian diet may not taste good or may not be as healthy were the main barriers to giving up meat,” Rosenfeld said.

In contrast, the anticipated stigma from switching to a plant-based diet and the inconvenience of preparing and finding vegetarian food were not barriers to becoming vegetarian. Rosenfeld said this result was surprising, given that previous studies had suggested the fear of social stigma was the primary barrier to switching diets.

This UCLA study may be useful to food scientists, health psychologists and nutritionists who work with or study plant-based diets, Rosenfeld said.

For some UCLA students, taste seemed to be one of the major barriers when they changed to a plant-based diet.

Alex Richardson, a business graduate student, said he occasionally lapsed from his vegan diet in order to eat ice cream.

“When I first went vegan, I made occasional exceptions for ice cream until Ben and Jerry’s came out with vegan ice cream,” Richardson said.

Richardson added that only when he realized Ben and Jerry’s vegan ice cream could satisfy his cravings did he stop slipping from veganism.

Kyle Meador, a biochemistry, molecular and structural biology graduate student, said that initially the hardest part about switching to a vegetarian diet was the taste, as he felt that vegetarian food did not taste as good as an omnivorous diet.

“I felt like I was eating a lot of sides and not a main course,” Meador said. “(When I was starting,) I just didn’t know what to cook.”

However, Meador added once he had experience cooking vegetarian food and figured out what to order at restaurants, taste was no longer a difficulty.

Both Richardson and Meador said health issues were not a major barrier to switching to plant-based diets. Additionally, both said they take nutritional supplements to offset common vitamin deficiencies from their plant-based diets and have not experienced any adverse health effects. Meador said he takes vitamin B12. Richardson takes both protein powder and other nutritional supplements

Eshan Uniyal, a second-year mathematics student, said he has experienced little stigma being a vegan at UCLA. His friends joke with him about being a vegan, but Uniyal says the jokes are mostly superficial.

“(Being a vegan) is the frequent butt of jokes, but most of my friends are supportive,” Uniyal said. “Everyone respects my decision.”

Nevertheless, Richardson said he still experiences stigma for being a vegan, even in Los Angeles.

“People go overboard with criticizing everything you eat,” Richardson said. “People judge … because the reasons for being vegan can seem ‘holier than thou.'”

Even though Uniyal said the taste of an omnivorous diet still tempts him, he is firm in his decision to be vegan because he believes animals should be treated better and not butchered for consumption.

“Very few things match the taste and texture of meat,” Uniyal said. “I miss it, but I wouldn’t have it back.”