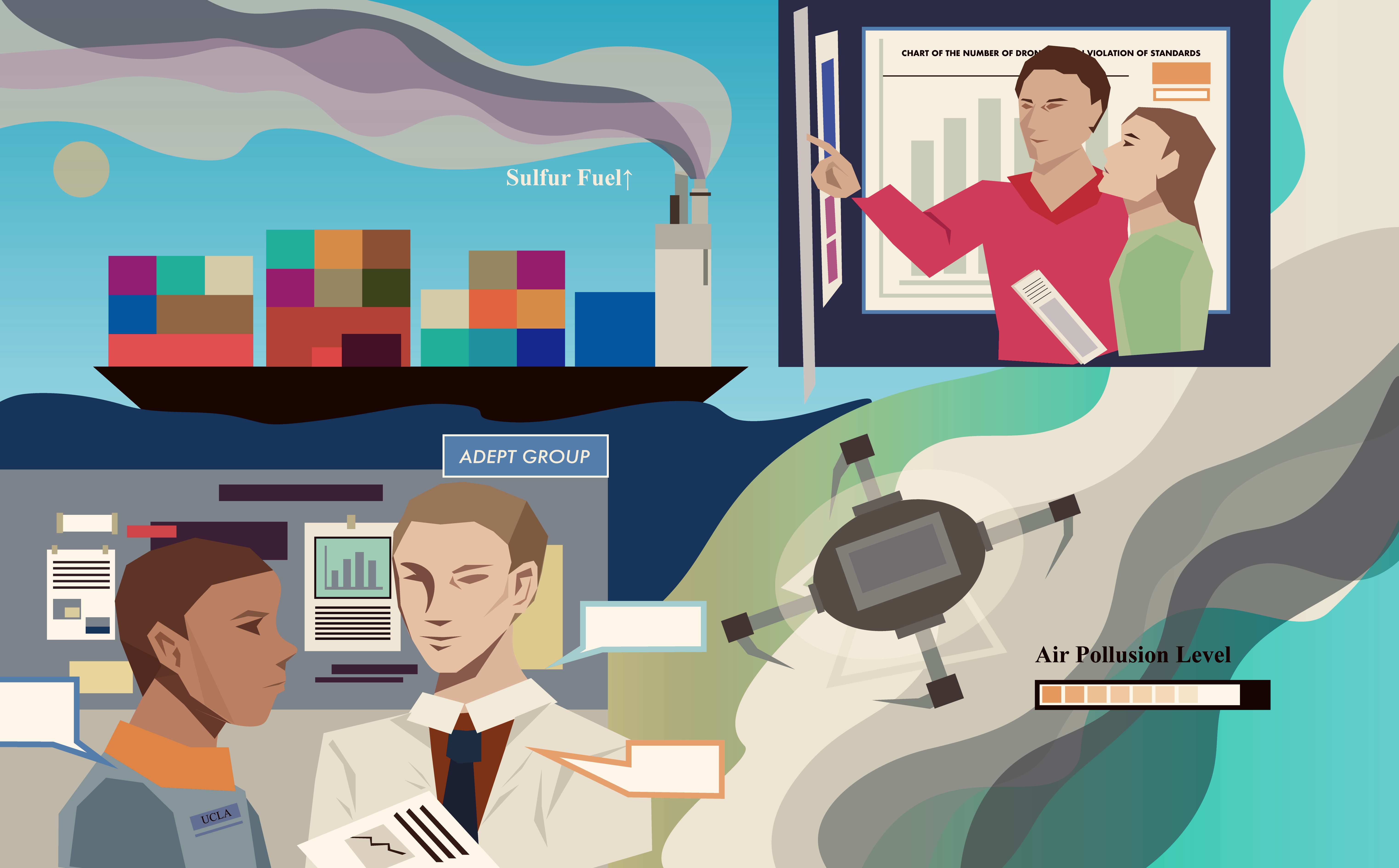 A UCLA student-led study found that drones can be used to determine whether ships are following pollution regulations.

The drones could help enforce air pollution requirements by examining ships’ emissions through a sensor package, according to the study, which was published in August. Specifically, the drones would check if cargo ships are burning clean fuel – fuel which has a maximum of 0.1% sulfur concentration.

The sensor package is similar in shape to a box, said Anthony Rosas, a recent UCLA alum and co-author of the study. Rosas said particulate matter from the air goes into the box and reacts with a chemical inside. The sensor then states which type of fuel is being used based on how the emissions react to it, he added.

The study was led by students as part of the UCLA Institute for Environment and Sustainability’s senior practicum, in which students are required to work on a yearlong project that focuses on addressing environmental issues.

In their fourth year, students are told which projects are available, and from there, they are assigned one of their top choices to work on for the rest of the year, Rosas said.

One of the projects available last year involved tackling lingering environmental issues in disadvantaged communities surrounding the ports of Los Angeles and Long Beach, said Luna Bai, a fourth-year environmental science student and co-author of the study. Many of the issues in these areas come from pollution from large Ocean Going Vessels, commonly referred to as OGVs.

Oil has to go through many different steps in order to be used as fuel for ships. Residual fuel is the dirtiest and heaviest fuel left after the whole process, Bai said.

“The ships just use this oil, and it (contains) … chemicals like sulfur and nitrate. … If you burn it, it all goes into the environment, and those are very, very bad for human health,” Bai said.

Although there are laws that limit the use of residual fuel in certain areas of the ocean, including most large ports, there are too many ships and too few people to enforce these laws, Rosas said.

Burning residual fuel can cause anything from lung cancer to death, said Alex Spataru, CEO of The ADEPT Group, Inc., an environmental consulting company that oversaw the project.

Ships are required to use clean fuel from a certain distance from the port. However, many operators choose to “cheat” by only using this fuel when they are very close to shore, Spataru said.

As a result, it is difficult to tell whether the ships are following these rules throughout their entire journey or not. Companies have a strong financial incentive to cheat, and the chance of getting caught is very low, he added.

In Europe, several companies have developed systems that combine a pack of sensors mounted on a drone or on a helicopter to detect whether ships are using clean fuel, Spataru said. These can fly into the plume of a ship and determine what type of fuel being used based on its emissions.

The idea was developed by a professor at Chalmers University of Technology in Sweden, who was the first to think about a way to detect whether ships were “cheating” at sea. Since the OGVs can only be boarded by the ship’s personnel, researchers are unable to check whether operators are compliant or not through other means, Spataru said.

With the drones, port officials can easily target which ships may not be complying with clean fuel regulations, and upon their arrival in the port, their fuel can be tested and operators fined if found to be noncompliant, Spataru said.

“Our job is to provide (the California Air Resources Board) with the cutting-edge tools to (help) them to do a better job at policing those who cheat,” Spataru said.

The students used a model to predict how much air pollution would decrease with the implementation of the drones and how the health of people living near the ports would be affected, Rosas said.

In the model, the students assumed the ships complied with existing regulations as a result of the implementation of the drone-based monitoring technology, Bai said.

“Unfortunately, we weren’t able to get the models to completely work, so we had to use some formulas instead of models to figure that out,” Rosas said. “That’s just probably because we were all new to modeling and coding.”

The students calculated the sulfur concentration in the air would be cut in half if the drone technology were implemented.

The drone and sensor package technology will be able to pave the way to cleaner air for those living in or near port communities, Rosas said.

“It will be able to enforce laws that were unenforceable before, so it’ll have immediate effects on the air quality,” he said. “That’ll be beneficial to everyone.” 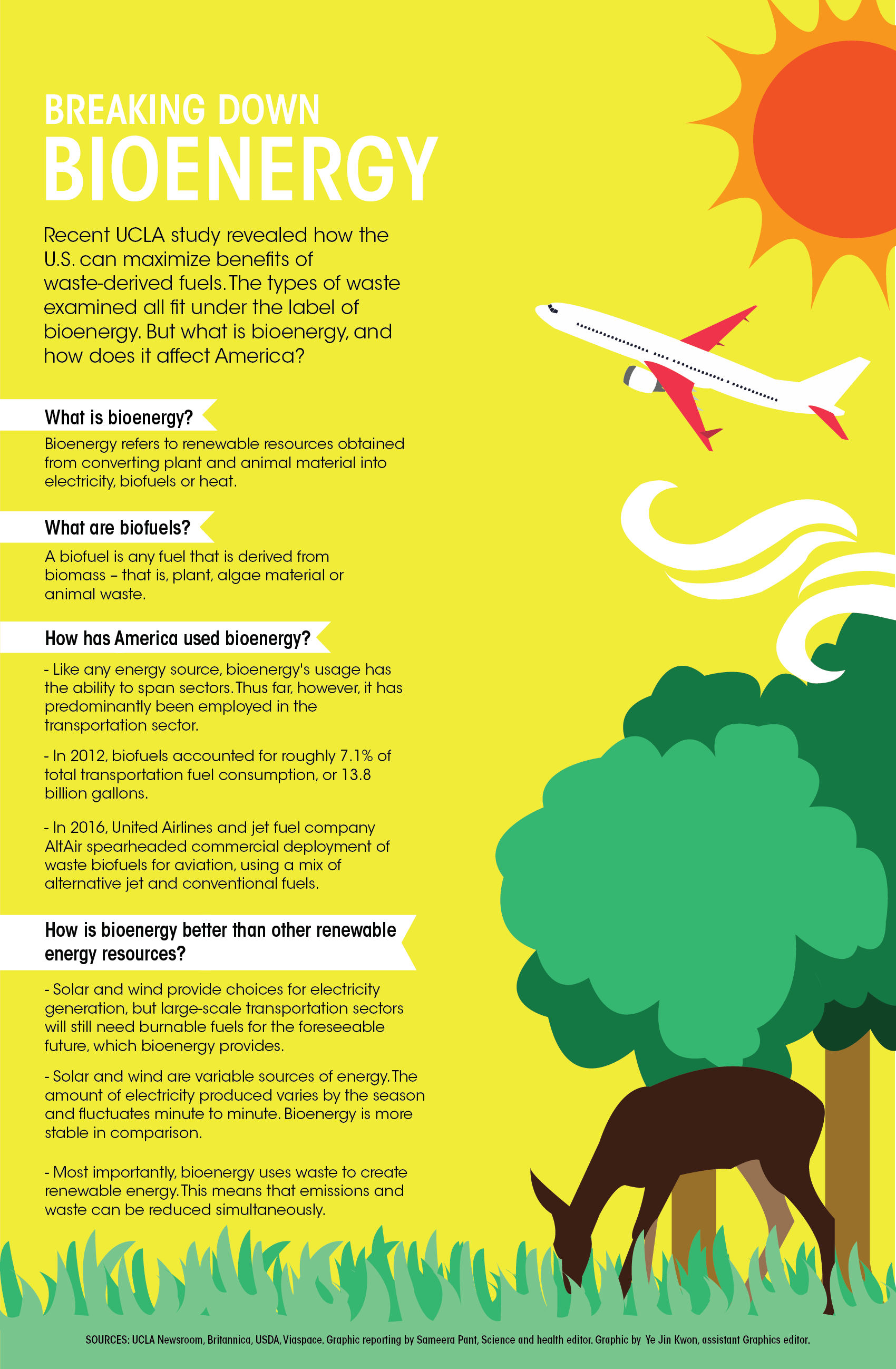 Study examines how waste can be used for bioenergy, potentially on national scale