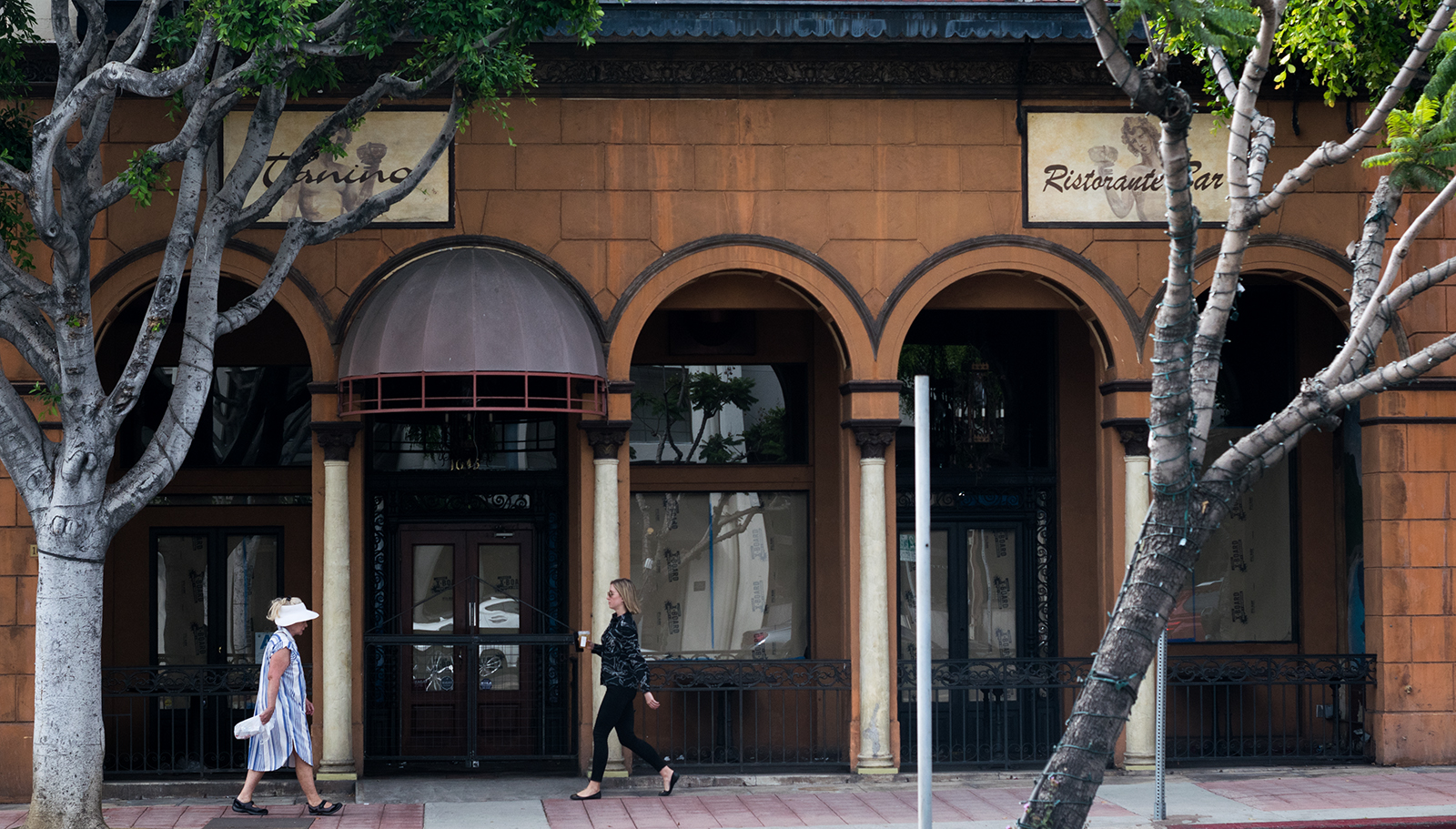 Tanino Ristorante Bar, an upscale Italian restaurant on Westwood Boulevard, closed in July because the landord ended its lease. Some stakeholders say restaurants like Tanino have difficulty relocating in the Village because of the Westwood Village Specific Plan. (Emily Ng/Daily Bruin)

Correction: The original version of this article incorrectly stated Tanino Ristorante Bar closed in July. In fact, it closed in the end of June.

A string of restaurants have closed in Westwood over the past few months, adding to an already high vacancy rate.

Falafel King, a Middle Eastern restaurant on Broxton Avenue, posted a handwritten letter in early September on its door announcing its closure and thanking customers for their support over the last 50 years.

Mediterranean restaurant SpireWorks and sushi bar Nushii have also closed on Broxton Avenue in July. Even Tanino Ristorante Bar, an upscale Italian restaurant on Westwood Boulevard, closed after 20 years in the end of June, and recently Ike’s Love & Sandwiches closed in mid-September with a sign asking customers to check back soon.

Westwood Village has a vacancy rate of over 20%, executive director of the Westwood Village Improvement Association Andrew Thomas said. The spur of recent closures has added to that rate, prompting concerns among stakeholders about the vitality of Westwood businesses under current zoning regulations.

Thomas said the spur of closures may be attributed to the failure of some businesses to sustain their appeal. He added he thinks other businesses might do better where others have failed before.

“For SpireWorks, for Nushii and for the Falafel King, you know not every business is going to succeed,” Thomas said. “Some run their course, those businesses didn’t make it here. … There’s a number of reasons why, but just because they didn’t make it doesn’t mean that the businesses that will follow them won’t have a better go of it.”

Michael Skiles, president of the North Westwood Neighborhood Council, blamed the closure of Falafel King to a gradual deterioration in quality.

“It got to the point where the last time I went in there to buy a meal, I was the only person at the restaurant and I was waiting there for seven minutes before any worker came out to greet me,” Skiles said. “The food had been sitting there for who knows how long because not that many people were buying it.”

These new vacancies become a problem if new businesses are unable to fill them, Thomas said. The binding restrictions of the Westwood Village Specific Plan, a master planning document for Westwood zoning regulations, may be hindering the ability of businesses to move into Westwood even when there is a demand for them, he added.

“Ultimately, we need our businesses to have the opportunity to come in and fail,” Thomas said. “If the specific plan is so narrowly written that businesses don’t even get the chance to come in and try, then what our plan is really doing is valuing vacancy over business.”

The specific plan has strict definitions for different types of businesses and restricts where they can open. It also imposes parking requirements that can be difficult for business to meet.

Longtime businesses such as Sepi’s, a sports bar which closed in April, can be prevented from relocating quickly because of the regulatory environment, Skiles said. Tanino Ristorante Bar faced a similar dilemma when the landlord ended its lease to convert the building into an office space, he added.

“Just all the hoops you (have) to go through to get a new restaurant permitted and open makes it extremely hard for any restaurants to just leave one space and quickly move over to another space down the street,” Skiles said. “The regulatory environment just doesn’t allow the flexibility for the quick move we’d like to see.”

Though some restaurants have had difficulty relocating, Headlines Diner and Grill successfully relocated in July after its lease ended at its previous location. However, a co-owner attributed the quick transition to pure luck. The restaurant replaced Lollicup Fresh, a coffee and juice bar that also closed over the summer.

Some UCLA students have noticed the trend in vacancies but have differing views on the severity of the issue or the causes of the problem.

“It seems like there’s enough for me personally,” Mehta said. “For others who have maybe hit all the spots already it might be a little bit different, but as a first-year in the second week of school, it seems it seems like it’s pretty good.”

Chen Wang, a third-year mechanical engineering student, said he has noticed many vacant locations in Westwood, but he felt Westwood Village is an attractive enough location to draw in more businesses.

“That’s not a problem for Westwood because it’s close to UCLA,” Wang said. “There’s just a lot of business opportunities because students like to go to Westwood for a drink or shopping or having meals.”

Jenni Dabbert, a second-year pre-human biology and society student, said she would like to see more mom-and-pop shops have the chance to fill those vacant spaces rather than already well-known businesses. She added she thought the vacancy problem was an issue that has affected locations she has enjoyed.

“There were a lot of restaurants I did like in Westwood that have closed down in just such a short amount of time,” Dabbert said. “I think the options are becoming a little bit more limited.”