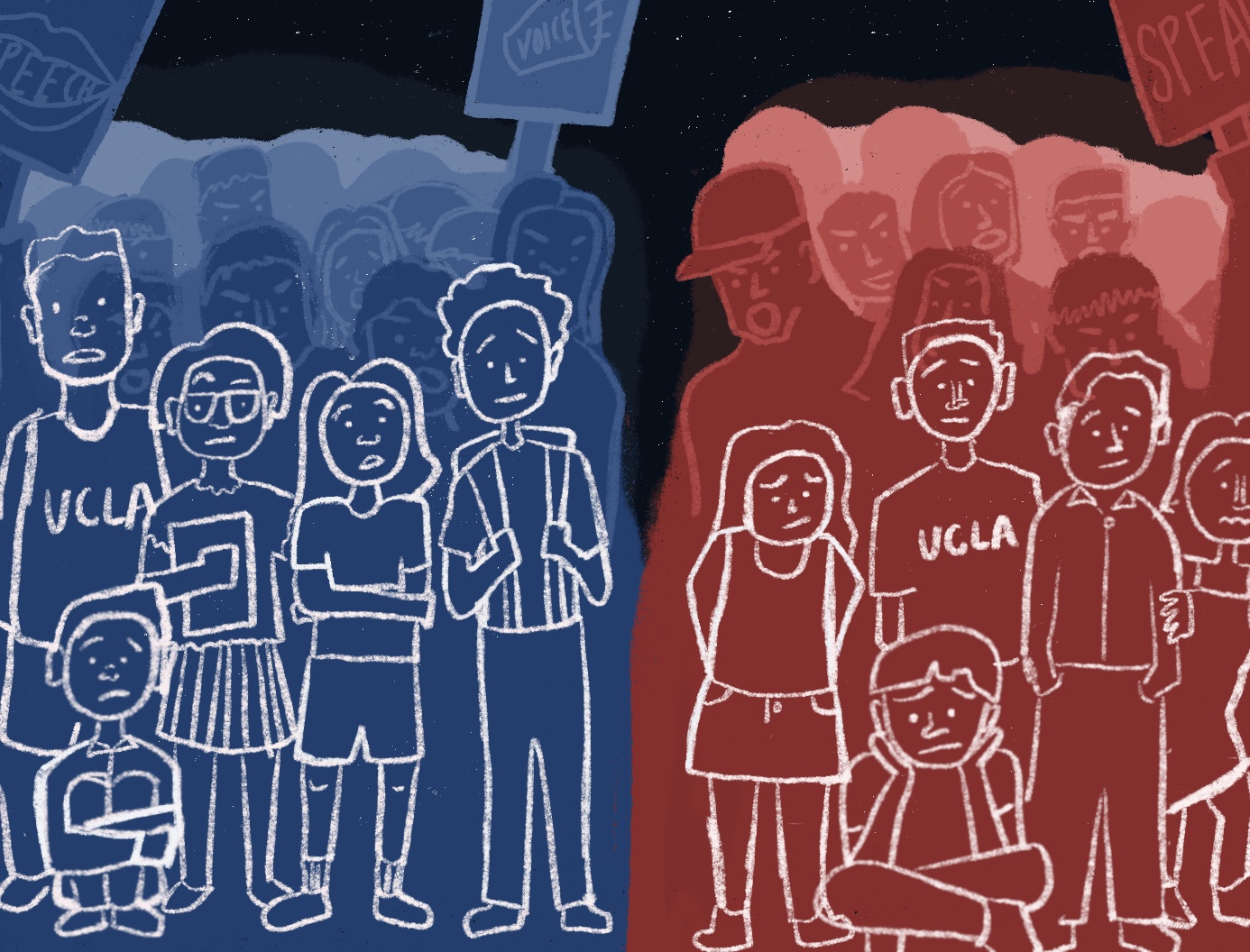 UCLA is diverse in every way but one.

Our campus welcomes and celebrates a diverse range of backgrounds and identities, from race to sexual orientation. There is one category, however, in which UCLA demands homogeneity – political views.

Higher education is notoriously thought of as both liberal and left-leaning, but at UCLA, leaning left is more than a norm; it feels like a requirement. It’s often a prerequisite for social acceptance, and frankly, being viewed as anything but a bigot. Conversely, conservatism or leaning right in any form is often condemned. Even when it comes to the smallest of fiscal matters, right-leaning views at UCLA commonly aren’t accepted.

The No. 1 public university in the nation should welcome – encourage, even – diversity of thought. Students, faculty and staff alike should work to foster an environment meant to support a diverse range of ideas and viewpoints toward all issues – within reason – with the knowledge that they enrich our campus.

Instead, the UCLA community does the exact opposite, branding anyone who dares deviate from the political majority with a scarlet letter – red to match the party it’s set up to shame.

The result is an ideological echo chamber, students in political hiding, stifled dialogue and a call-out culture that stops conversations before they can begin.

The experience of political condemnation is felt in both academic and social environments by students anywhere on the right – from those central to the furthest end of the spectrum.

Michelle Ohanian, a third-year history major and the policy director for Bruin Republicans, says she experiences this condemnation in class.

“When there’s a more conservative viewpoint expressed, I find that the (teaching assistant) or professor will often have a retort, whereas when students express left-wing opinions, the professor will just nod,” Ohanian said. “When you’re in an environment where the teacher is responding unfavorably to your comment or contribution, other students will perceive you to be incorrect.”

For such a politically charged environment, political shaming remains pervasive at UCLA. Our campus is filled with political activists genuinely passionate about their beliefs. And regardless of partisan ideologies, civic engagement is great – until it manifests in students shutting down any opinions different than their own.

Discourse is a two-way street – but one lane is shut down at UCLA.

Too often, following an instance of disagreement, individuals with conservative or right-leaning viewpoints are judged or mislabeled with a barrage of stereotypes. They are frequently called bigoted, close-minded and even racist when the disagreement pertains to an issue of diversity or inclusion. These are heavy assumptions to be made based on a single viewpoint – yet, these accusations are often more accepted than the viewpoint itself.

But the belittlement doesn’t stop at name-calling.

Just two years ago, when conservative writer Ben Shapiro was invited to speak on campus, UCLA asked Bruin Republicans pay for security fees other student organizations have not always been asked to cover. Similarly, Treasury Secretary Steven Mnuchin was heckled during a speaking engagement at UCLA, making it nearly impossible for him to get a word in edgewise.

Evan Farrar, a second-year public affairs major and the finance director for Bruin Democrats, said although he can’t empathize with this experience, he recognizes the damaging environment it fosters.

“When students are in an environment where they legitimately feel silenced, it actually leads to more political polarization on campus because they don’t feel like they can talk without being immediately judged,” Farrar said.

More often than not, these disagreements stem from an inability to separate entangled issues.

Take the issue of affirmative action. It has been outlawed in the state of California since 1996, when voters enacted Proposition 209. Clearly, individuals hold different thoughts about the issue for a variety of reasons. But too often, baseless associations leave the supporter with the impression that anyone against affirmative action must not want underrepresented or marginalized groups at the institution. The reality is often more nuanced – those against affirmative action may just not believe in a very active university or government administration in that regard.

You’d be hard pressed to find someone at UCLA who doesn’t believe diversity is a good thing. But too often, different issues are mistaken as the same in the heat of the moment.

Efrén Pérez, a professor of political science and psychology, put this misunderstanding simply.

Of course, there is a clear distinction between earnestly expressing political views and voicing opinions intended to make others feel uncomfortable or unwelcome – something the current leader of the Republican party seems to misunderstand. We should be respecting others’ views, but doing so within reason. Our campus has no room for genuine bigotry or hate speech.

But even the temptation to associate President Donald Trump’s rhetoric with the party he claims to represent does not justify slapping negative stereotypes onto someone who may lean right. And it certainly doesn’t merit shutting down conversations before they can begin.

UCLA is an institution of higher learning – one of the best there are – and as such, its students should be open to learning from one another’s viewpoints. Blindly stereotyping those with different politics gets us nowhere, because civil discourse can never thrive without mutual respect on both sides.

It’s time we start recognizing and accepting that there are different stances on the same issues.

And this doesn’t merit dishing out scarlet letters.