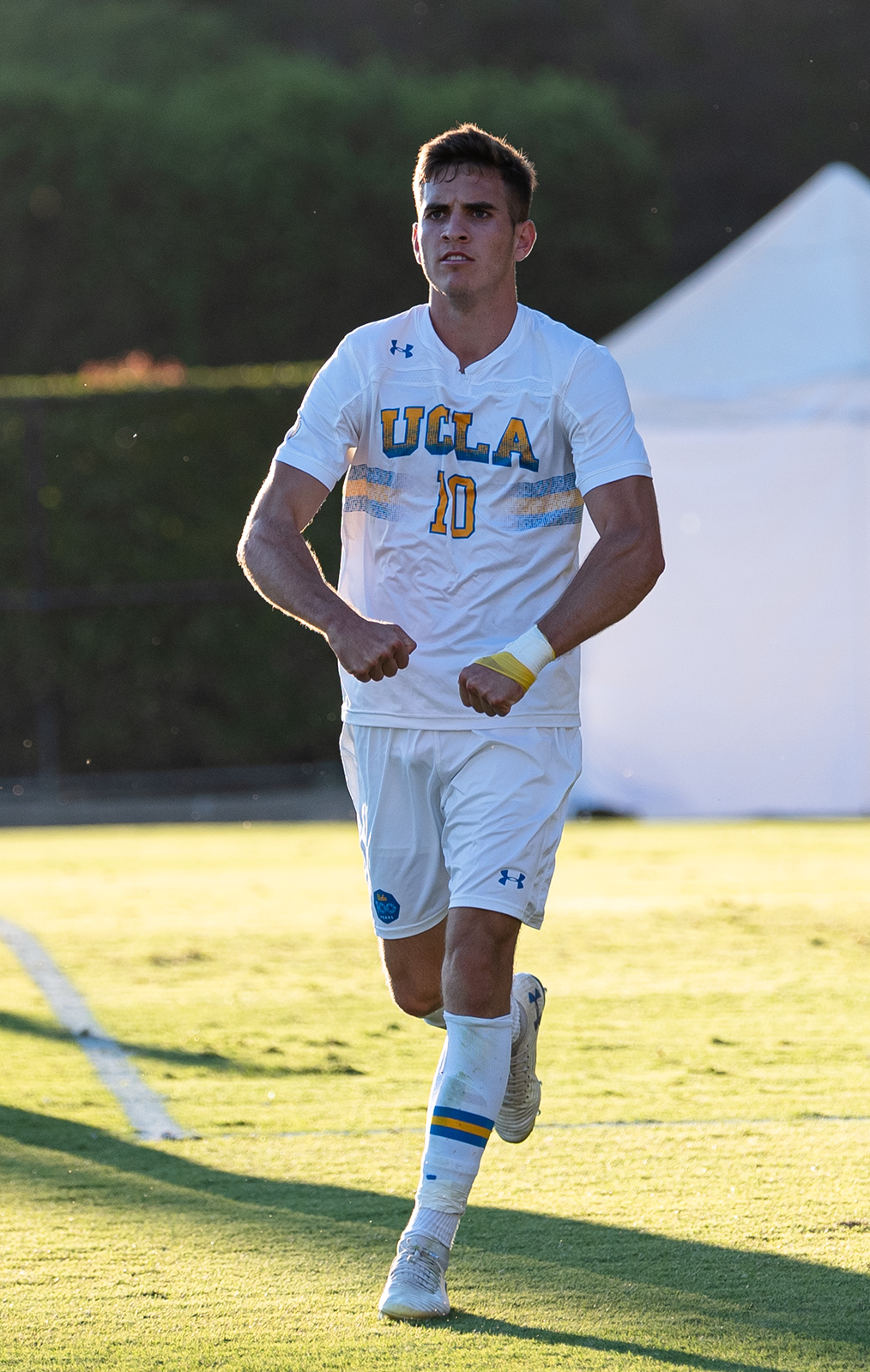 After the Aztecs jumped on the board first with a goal in the second minute, the Bruins stormed back with Iloksi’s five unanswered goals.

“We know (Iloski) is good in front of goal,” said coach Ryan Jorden. “He’s calm during the moment of truth and he got a handful of moments tonight where that was possible for him. If the team plays well behind him, he’s going to find those moments to pick the ball up.”

Iloski picked up his first goal of the game in the 27th minute when sophomore midfielder Riley Ferch hit a weighted pass through a retreating Aztec defense. Iloski, one on one with goalkeeper Max Watkin, managed to dribble to his left around Watkin and shot the ball into the empty net.

Iloski saw another chance at goal in the 41st minute on the back of a cross into the box from junior midfielder Marcony Pimentel. Iloski’s shot – that had a chance to beat the Aztec keeper – ricocheted off the back of an SDSU defender in the 6-yard box, keeping the game level.

But Iloski would strike again just one minute later, slotting home a cross from the right side of the pitch, giving Iloski his 11th goal and Ferch his second assist of the game.

“We worked very hard this week on pressing high up the field and that helped us a lot,” Iloski said. “I was very proud of our midfielders looking forward and playing forward balls tonight.”

Twenty-three minutes elapsed before Iloski scored his third goal of the night – a feat he had already accomplished against Maryland this year. Iloski’s right-footed free kick curled into the top-right corner, out of reach of Watkin, to give the Bruins a 3-1 lead.

“(Iloski) is one of the best players in the country,” said junior defender Ruben Soria. “The numbers that he is providing show for it. It’s great to know that we have a player of that caliber up there who can hold the ball up, and it alleviates a lot of pressure on you.”

The ball found Iloski on a throw in after he had made a run toward the Aztec goal. One on one with the keeper again, Iloski was pushed to the ground and the referee pointed to the penalty spot. Iloski’s penalty was slotted into the top-right corner.

“I think this group of guys has shown a (drive) to try and get better every time out,” Jorden said. “We’ve had a few performances that weren’t very good, but they’ve come back and every time they are trying to learn and get better, and that’s all you can ask for as a coach.”

The game continued with Iloski tied for most single-game goals in program history. In the 76th minute, the forward received a pass inside the box, faked a shot – causing a defender and the goalkeeper to slide prematurely – and passed the ball into the net.

When the ball crossed the goal line, Iloski broke the record.

“I think I should have more goals than I have right now,” Iloski said. “I expect this from myself every night, to give this type of energy and lift. It’s not an accident, it’s happening because I put the work in.”

Iloski is now in line to be the NCAA leader in goals scored. Last updated Tuesday, the Clemson forward Kimarni Smith currently sits at No. 1 on the NCAA leaderboard with 11 goals.

“When people doubt you and question you coming into the season, it gives you that extra edge,” Iloski said. “I thank all those people that didn’t put me on those (preseason) lists because I wouldn’t have 14 goals right now if they had.”