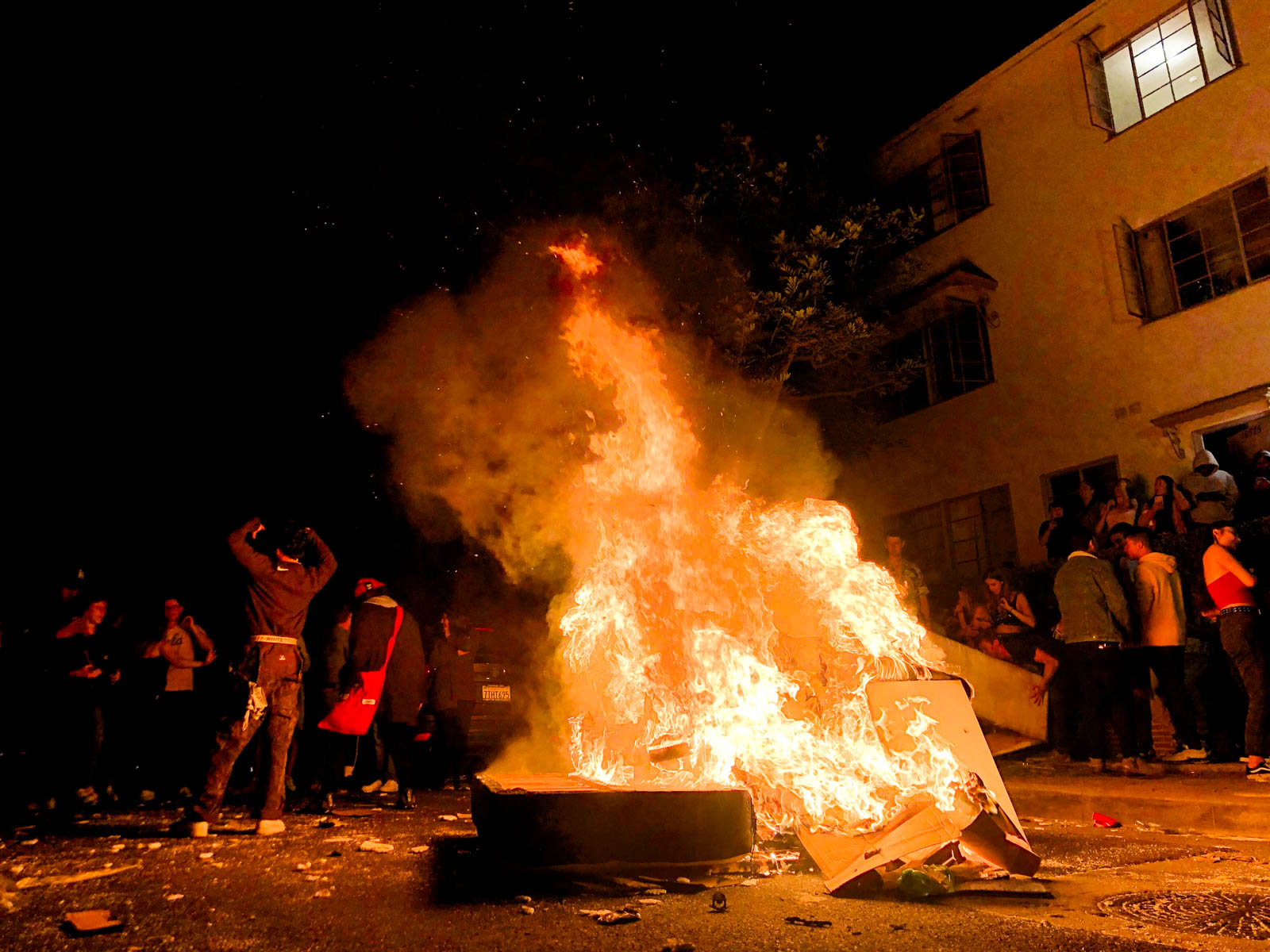 Police and firefighters responded shortly after midnight to reports that partygoers at the Roebling Avenue block party had become unruly. Firefighters quickly extinguished a rubbish fire, and no injuries were reported, said an LAFD spokesperson. (Axel Lopez/Daily Bruin senior staff)

The Roebling Avenue block party was shut down by police again this year after partygoers set multiple fires, witnesses said.

The Roebling block party, which ended in January with police in riot gear dispersing hundreds of partygoers, was again the subject of police response after a large crowd became unruly.

The block party began as a Facebook group of Roebling residents in 2018, said Dante Bruno, a third-year aerospace engineering student.

Ranali Perera, a third-year financial actuarial mathematics student, said she lives in an apartment in front of where partygoers set the fires. She said she was in the back of the crowd with her friends when everyone began moving to the front, pulling cardboard into a pile and setting it alight.

Bruno said he arrived at the block around 10:30 p.m. but found it mostly empty and instead went up into his friend’s apartment on the street. A few minutes later, a large crowd showed up with cardboard and mattresses and set the first fire, Bruno said.

“And then there were people jumping through the fire, which I don’t understand, because I’m like, ‘What are you doing?’” Perera said.

The block party continued even after emergency responders arrived, with students chanting expletives about USC as police and firefighters pushed through the crowd.

“It was funny because no one moved at all – people were just playing music, and everyone was dancing while the firemen were there,” Perera said.

Students then set another, larger fire, Perera said, the heat of which she said she could feel even after she returned to her bedroom.

“And it was just getting bigger and bigger until finally the firemen came and wet the entire area,” Perera said. “And immediately after they left, people kept saying, ‘Another one!’”

LAPD officers also responded to a call at 12:10 a.m., an LAPD spokesperson said, a little over an hour later than UCPD.

Bruno said he and his friends had been standing on a balcony above a car as the crowd vandalized it. Students were standing on its roof and windshield and attempting to destroy it, Bruno said.

No injuries were reported from the fires, said an LAFD spokesperson. LAFD has not determined whether the fire was the result of the crowd, the spokesperson said.

Even as the fire raged, Perera said she wasn’t concerned.

“I knew the minute we decided to move here, I was like, ‘We have to expect this every quarter,’” Perera said. “When they started setting a third one I was like, ‘OK, now it’s getting a bit old.'”

“I heard that last year the police showed up in riot gear,” Fragoso said. “That would have probably been exciting.”