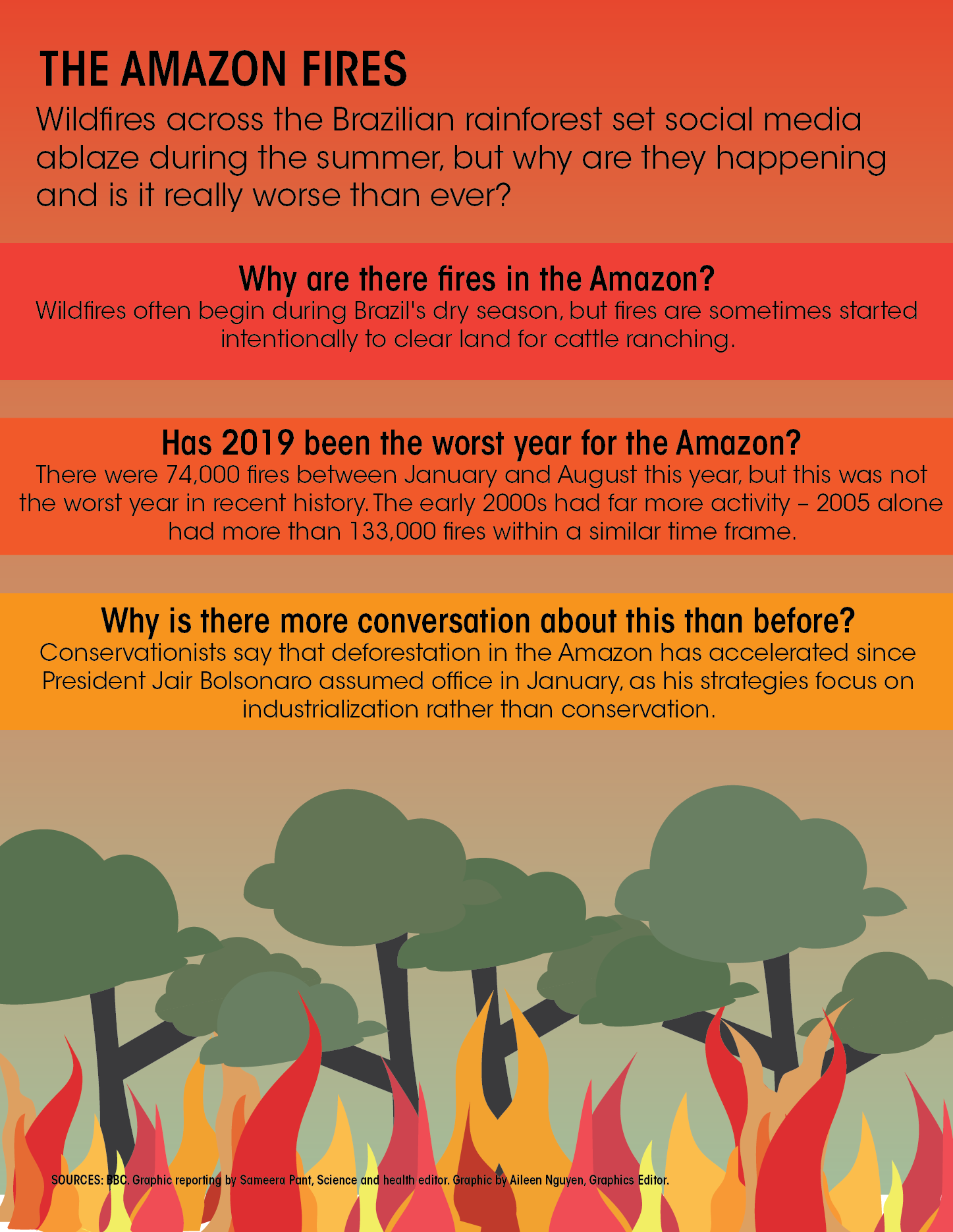 Fires have been burning in the Amazon Basin since August, eliciting international attention. The spotlight has been focused particularly on Brazilian President Jair Bolsonaro for his potential role in encouraging forest burning in the basin. Forest burning is a long-standing method used originally by indigenous communities to clear land, but the increase in these intentional fires and the dismantling of regulatory mechanisms since Bolsonaro’s election has allowed the Amazon rainforest to descend into the precarious state it is in.

The recent Amazon fires have burned over 12 million acres, said Susanna Hecht, a UCLA urban planning professor who is an expert in Latin American tropics, specifically the Amazon Basin. Hecht said the burning area is the size of New Jersey or Belgium.

Anjali Singhal, co-president of Student Wellness Commission EARTH, a committee under the SWC that focuses on environmental advocacy and awareness, said she was not surprised by the news of the fires. However, Singhal said she thinks UCLA’s student body is not fully aware of the situation in the Amazon.

“I think that they’re aware of the fact that the Amazon is burning. I don’t think everyone understands quite how extreme (it) is,” Singhal said. “They’re just like ‘Oh, it’s another fire’, ‘Oh, it’s just another natural fire’ … but that’s not the truth.”

There have been many health and environmental repercussions from the last few months of fires, Hecht added.

“One is, of course, the amount of carbon that has been spewed into the atmosphere,” Hecht said. “And the other thing is that even if it’s not burning to the ground, it’s also doing a lot of damage to ecosystems around it.”

Raúl Hinojosa-Ojeda, an associate Chicana and Chicano studies professor who focuses on political economics in various parts of the world, agreed that the fires have had major environmental implications.

“(The fires are) not only adding (carbon dioxide) massively into the atmosphere,” Hinojosa-Ojeda said. “But also cutting back what is one of the most important reserves of plant life and capturing carbon. It’s a double whammy that has really severe potential for accelerating climate change, probably more than any other region in the world.”

Animals and people can’t outrun fire, and like those in the California fires last year, a lot of animals have perished in the fires, Hecht said.

Particulates and ash from the fires have also decreased air quality. Hinojosa-Ojeda said cities like Sao Paulo, which is over 2,000 miles away from the forest, were blackened by the smoke.

“Essentially, there was so much soot in the air from these fires that it was dark at noon,” Hecht said.

“We’re likely to see more migration internally in Amazonia and regionally in other places. (The fires have) a lot of social consequences … they’re marginalizing local forest-based livelihoods, making them essentially impossible,” she said.

Hecht said that the recent forest burnings have been used as a way of land grabbing from protected areas which include national forests, national parks, indigenous areas and sustainable development areas. Hinojosa-Ojeda said the indigenous communities in the Amazon Basin are facing matters of life and death because of the fires.

“For (indigenous people), these are not policy differences, these are matters of life and death in terms of their survival (and) ancestral homes,” Hinojosa-Ojeda said. “From their point of view, they’re facing genocide. (The fires and deforestation) not only require them to move, their entire (culture), language, religious system is destroyed.”

Hinojosa-Ojeda said that people didn’t expect Bolsonaro to win and he represents a coalition of extreme right-wing forces in Brazil.

“People have taken (Bolsonaro’s) election as a green light to radically accelerate the burning agenda and trample on the rights of the native people,” he said. “And take advantage of the fact that (the native people) are not politically represented in the current government.”

Hecht said Bolsonaro has not enforced burning regulations and has gutted the institutions that control it so they won’t have the budget to be an enforcement mechanism.

Forest burning does not have to be destructive, though. Hecht supports healthy land clearing, saying that there are ways of using burning to be helpful rather than a prelude to complete apocalypse.

Hecht said fire in and of itself has been used sustainably, safely and in complex ways to manage tropical forests everywhere. Now, the practice has been abused and gone unregulated in the Amazon Basin.

“The technique is not new, but the scale of operation and the lack of government constraints … is really unprecedented,” Hinojosa-Ojeda said. “It’s fire. It’s illegal logging. It’s criminal networks. … It’s literally a wild, Wild West situation.”

Hinojosa-Ojeda said that the fires are purely a product of human action and that there is nothing natural about the process.

Forest burning is actually a long-standing practice used to clear land, especially for agricultural and livestock use. Hinojosa-Ojeda said you can’t grow grain or graze cattle in the middle of a rainforest so you need to destroy the rainforest by burning it first then going in to clear the land.

Hecht said the economics of clearing in the Amazon Basin needs to change for the long-term health of the forest. She suggests the production of other agricultural goods, instead of the current soybeans and beef, which are efficiently produced.

“You could be doing a lot of forest stuff that has much higher returns per acre. One of the things, of course, is something like acai which you know everybody consumes in Southern California,” Hecht said. “The returns per acre on that absolutely kill how much has been produced either by soy and especially by cow. So, there’s plenty of alternatives out there.”

If given a chance, the forests will recover, Hecht said.

“As they say, (with) current trends, it doesn’t look good,” she said. “However … when there (was) a lot of deforestation going on in the ’80s and ’90s, there was a lot of mobilization to keep those forests standing … you had really substantive institutional cultural change that worked.”