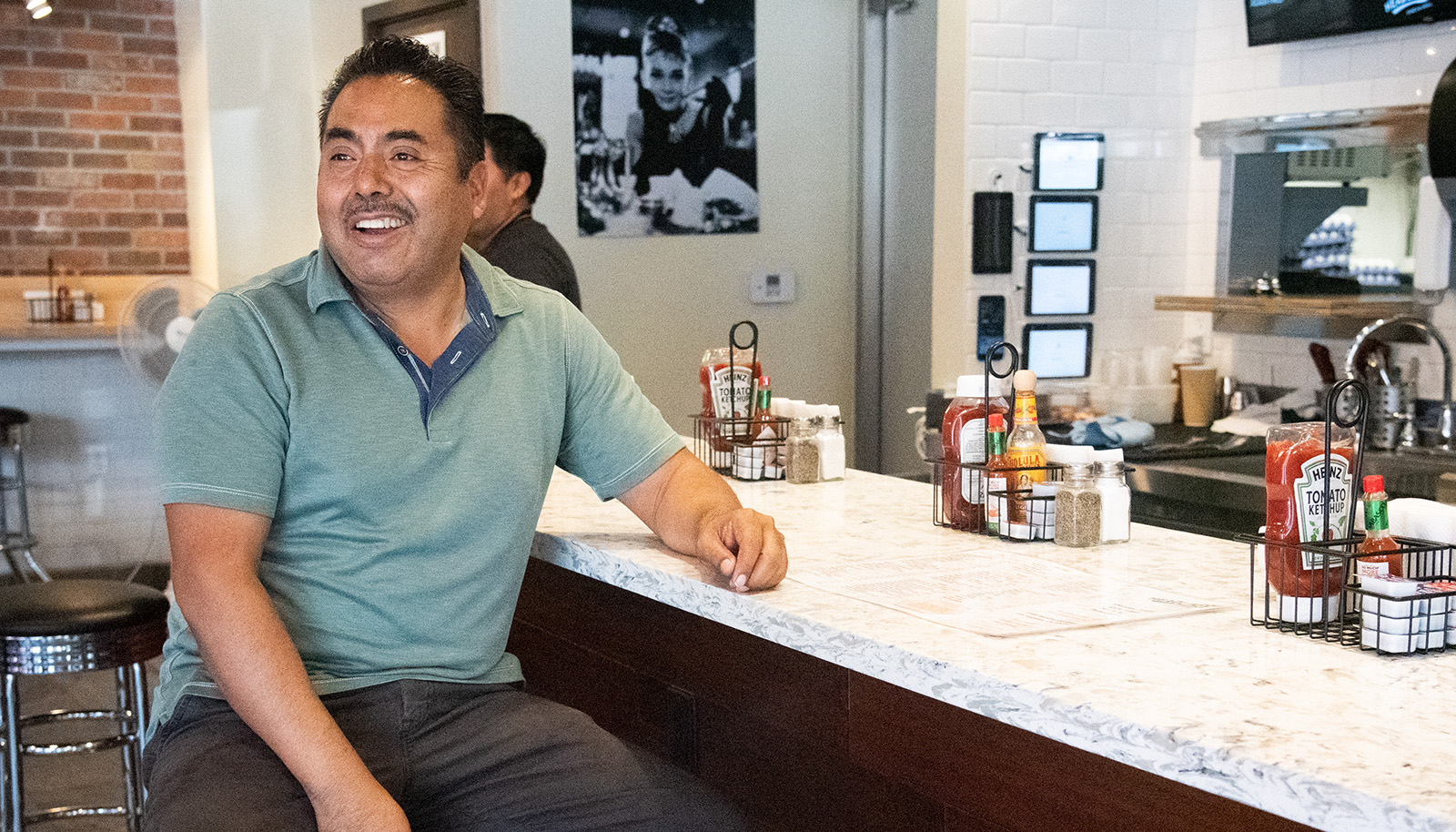 Benny Mendez sits at the counter of the relocated Headlines Diner and Grill on Westwood Boulevard. Mendez and his brothers took over the diner after the previous location was forced to move. (Joe Akira/Daily Bruin staff)

Benny Mendez realized his lifelong dream of owning his own business when he and his brothers took over Headlines Diner and Grill at a new location on Westwood Boulevard in July.

The new Headlines is modern with stone tile floors and a granite bar instead of a checkered floor and metal bar. Although its expansive menu of American and Mexican food is unchanged, it is now displayed on a row of high definition televisions rather than on physical signs. Large windows frame the diner, alongside a new outdoor patio illuminated at night by strings of light.

The previous Headlines closed July 29 but the new location, just around the corner from the last, opened two days later. It moved from its corner on Kinross Avenue because the landlord refused to renew their lease and wanted to open up the location to newer, modern restaurants, Mendez said. It was then that the prior owner, Mike Chang, decided to retire and offer the business to Mendez, his longtime employee.

“I worked for 15 years with him and he told me that it was time I continued Headlines,” Mendez said. “He gave me the opportunity.”

Mendez immigrated from Mexico at a young age and started working at Headlines as a busboy in 1989 when he was 17 years old. He co-owns the diner with his three brothers.

Gabby Mendez, Benny Mendez’s daughter, said her father worked multiple jobs during her childhood but was always dedicated to working at Headlines.

“I’ve seen him leave the house at 3 a.m. to go get merchandise that was needed here, and we wouldn’t see him until 10 in the night,” Gabby Mendez said.

Benny Mendez said he spent a lot of time getting large delivery orders ready for students, who are a key group of customers for Headlines. He added he sought to continue the business in Westwood because he wanted to keep serving locals and the student population that had grown attached to the restaurant.

“Many people inquired when we closed for two days, many said there’s no other place like Headlines,” Mendez said. “Maybe it’s the breakfast foods or the hamburgers. I think the price has a lot to do with it. We are not that expensive.”

He added he tries to appeal to locals and students by keeping prices relatively low, offering a student discount and including diverse menu options they would enjoy such as Mexican food or the Bruin Special breakfast that was added after receiving feedback from students.

Erick Mendez, co-owner of Headlines and Benny’s brother, said he first worked at Headlines for a few years in 1996 when he was 16 but returned in 2005 when his brother, then a manager, invited him back. Despite the change in location and decor, Mendez said the new restaurant doesn’t feel that different to him.

“We know this area so much. I feel like I know those (customers from) a long time ago,” Mendez said. “It feels like family. It feels right.”

The previous location had an open kitchen behind the bar. The kitchen at the new location is walled off save for a small window where orders come through.

Ramon Rachman, a customer for 18 years, said the new location lost a bit of its original character but he thinks the modern decor and patio area is nice.

“We do miss being able to watch the cooks,” Rachman said. “That was the whole flavor and the ambiance of the diner.”

Rachman said he keeps returning to Headlines after all these years because of its unique menu and the flexibility of the cooks to accommodate different preferences.

“A number of places that are available for going to lunch come and go,” Rachman said. “These guys have been here forever and the kinds of items they have here are not necessarily available at other establishments.”

Jack Smith, another customer, said the menu has not changed much in the last few years but he frequently asks for custom meals.

“Over the past four or five years the menu has been pretty much the same,” Smith said. “I always order sort of random options. I always make them customize all my meals anyway.”

Erick Mendez said the new location has seen a lot of new and old customers since it opened, who are largely UCLA students.

Though the diner has been busy recently, Benny Mendez said Westwood was busier and had more options when he started out in Headlines 30 years ago.

With an over 20 percent vacancy rate today, Westwood Village is quieter since the days when Benny Mendez started at Headlines. Some long-time locations such as Sepi’s sports bar have had difficulty relocating within the Village. Despite such trends, Benny Mendez was determined to stay in Westwood.

“They told us there would be no more lease so we had to look for another location here,” Benny Mendez said. “It was pure luck we found this location.”