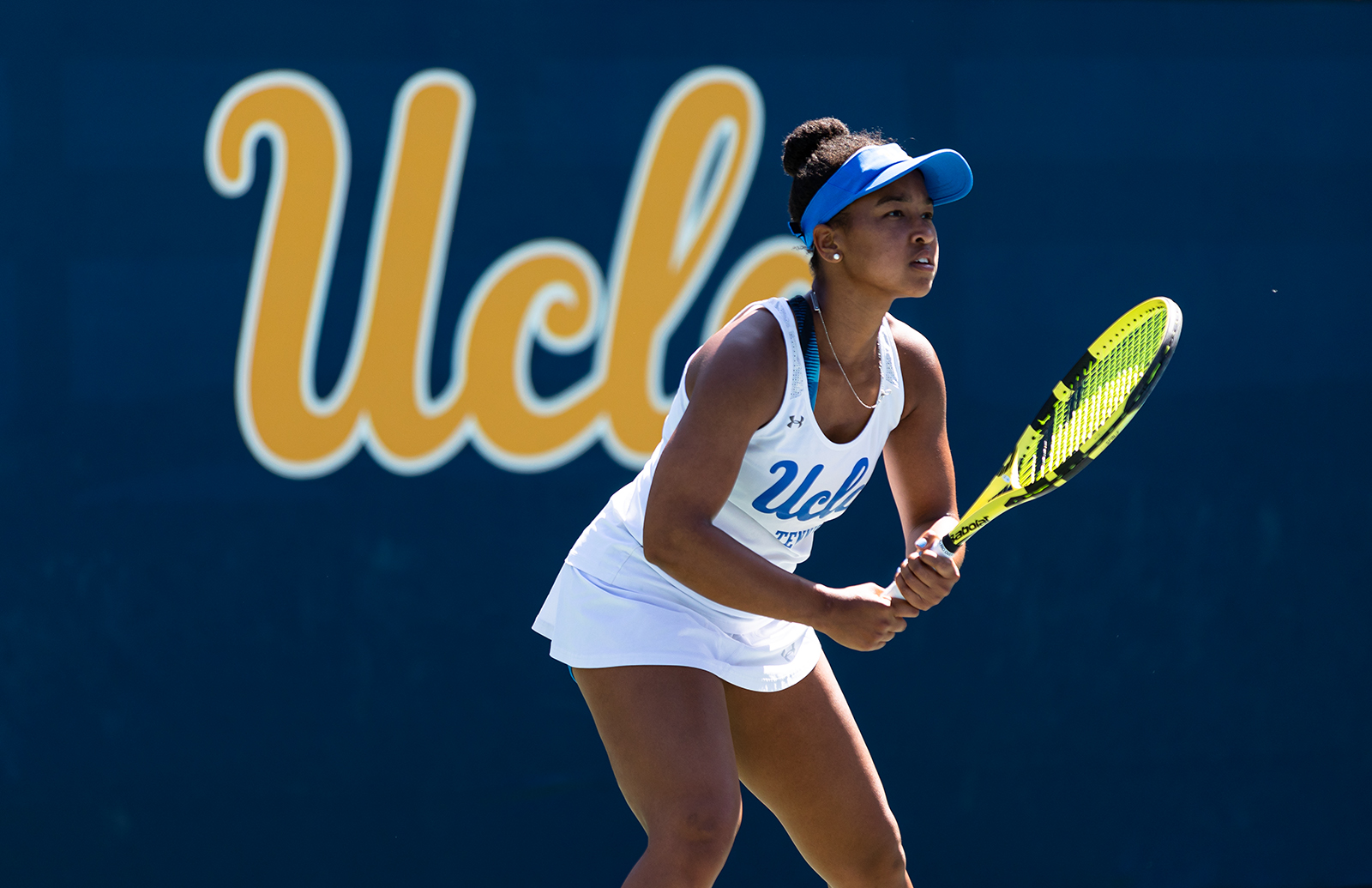 Redshirt senior Jada Hart is one of two Bruins who will represent UCLA women’s tennis at the Oracle ITA Masters in Malibu, starting Thursday. Hart posted a 19-10 singles record last season, reaching a season-high singles ranking of No. 14 in May. (Tanmay Shankar/Assistant Photo editor)

Correction: The original version of this article misidentified redshirt senior Jada Hart in the photo.

To open its fall slate of tournaments, UCLA women’s tennis will send redshirt senior Jada Hart and freshman Abbey Forbes to the Oracle ITA Masters in Malibu. UCLA will be one of two teams – the other being North Carolina – with more than one player representing it.

Since most of the qualifiers to the Oracle ITA Masters are players with past accomplishments or higher ITA rankings, very few freshmen have earned berths to the draw. Yet Forbes, named the No. 4 freshman/newcomer in the country by the ITA, is one of two freshmen entered to compete.

Forbes said having the opportunity to play in one of the preseason’s most prestigious tournaments is exciting as a freshman starting her first weeks in a new place.

“I’m really honored to have received a wild card into the tournament,” Forbes said. “Obviously as a freshman going in I’m super eager to play and I’m really excited to get started and play for UCLA.”

Forbes is coming off a summer where she played in the junior singles and doubles tournaments at the French Open, Wimbledon and the U.S. Open. Forbes and her partner Savannah Broadus won girls’ doubles at Wimbledon and she drew a berth into the women’s doubles draw of the U.S. Open by winning the USTA Billie Jean King Girls’ 18s National Championship doubles title with partner Alexa Noel.

Although Forbes has played in prime-time events before, coach Stella Sampras Webster said it’s still a new environment for a freshman to play in, including getting used to representing their school.

“It’s a strong tournament, especially for (Forbes) as a freshman,” Sampras Webster said. “To get her feet wet in college and see what the competition is like and play for the four letters on her uniform she should be excited and I think she will be.”

The Bruin accompanying Forbes is far from inexperienced, however. Hart is entering her fourth year playing for UCLA, with an NCAA singles quarterfinal appearance and two ITA All-American selections under her belt.

Hart will enter the tournament ranked No. 9 in the ITA’s preseason singles poll, but she won’t be the only high-level athlete in Malibu.

Three other top-10 players in the country will be competing in the 32-woman field, including No. 1 Katarina Jokic of Georgia and No. 4 Alexa Graham of North Carolina. In her 2018 sophomore campaign, Jokic was a finalist in the NCAA singles tournament and led Georgia to the NCAA team final before losing to Stanford.

Hart took time to play in some professional tournaments this summer for the first time since 2016, playing in four ITF events and making a semifinal as recently as Sept. 14. She said her return to the pro events gave her good work to build on in the fall getting back to college play.

“I think as of right now, I’m feeling good,” Hart said. “I’m excited to play my first tournament and see where I stand in the college realm after playing some tournaments over the summer and the recent weeks.”

The Oracle ITA Masters starts on Thursday and will conclude Sunday. The singles winner will solidify an automatic bid into the Oracle ITA National Fall Championships, which will be held in November.