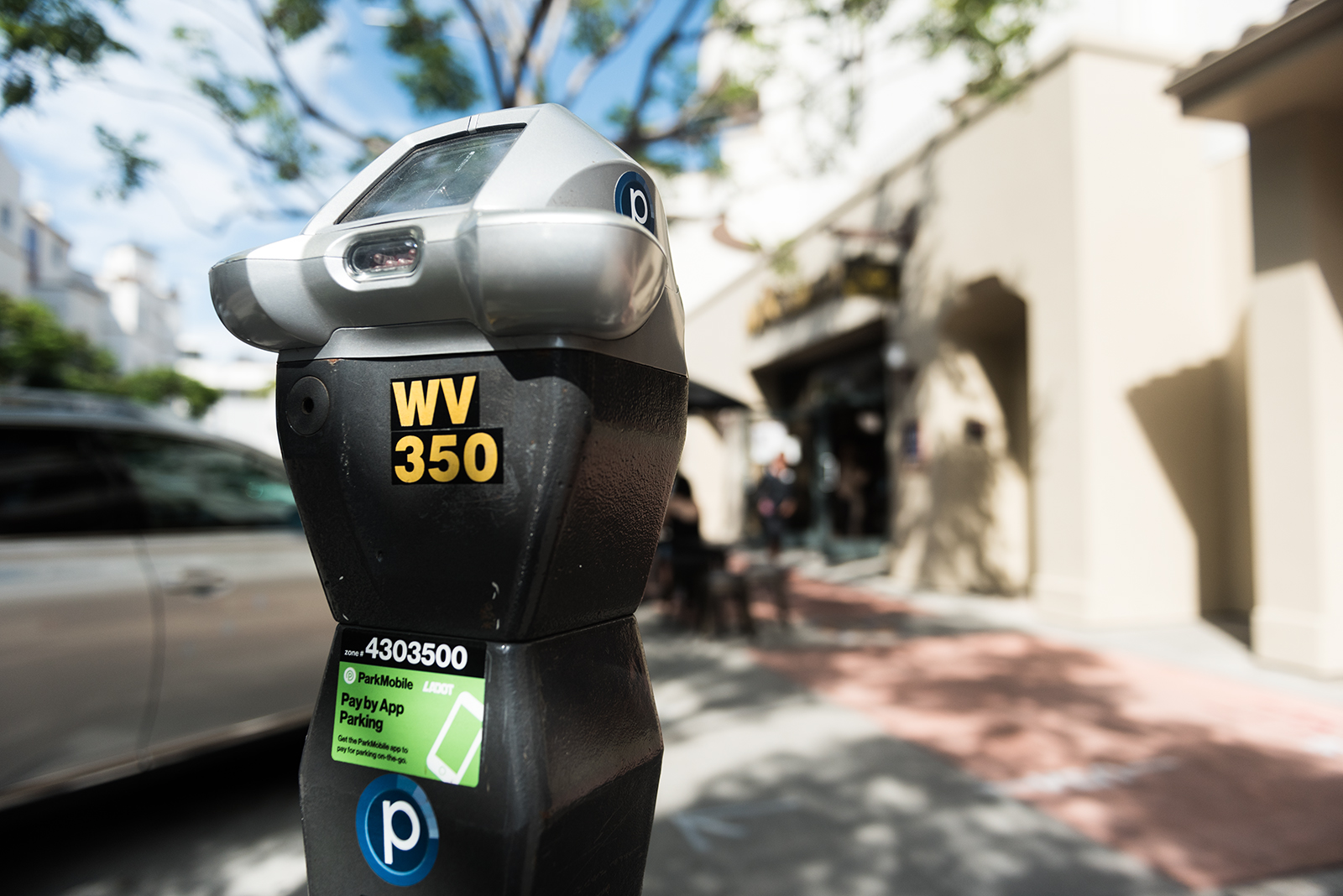 The Westwood Village Improvement Association turned the parking spaces in front of the Ministry of Coffee into a parklet with games and refreshments Friday. (Liz Ketcham/Photo editor)

Park(ing) Day is a global movement that transforms vehicle spaces into walkable areas and is observed globally every year on the third Friday of September. Westwood participated by temporarily changing a number of parking spaces into parklets – mini parks with games and refreshments for pedestrians. This is the first year that UCLA Transportation has participated with a location on campus.

This year, three different organizations hosted parklets in Westwood. The North Westwood Neighborhood Council used the area on the northwest corner of Le Conte Avenue and Westwood Boulevard, the Westwood Village Improvement Association laid out grass and games over parking spaces in front of the Ministry of Coffee and UCLA Transportation took several parking spots in Dickson Court for the event.

The WVIA’s and UCLA’s parklets included revamped spaces such as life-size games and refreshments. The WVIA location included free helmets and scooter safety information from Lyft e-scooter representatives, according to a press release from WVIA marketing and communications manager Megan Furey.

The parklet in front of Ministry of Coffee featured patio chairs and informational stands from the West Los Angeles Regional Library and Lyft e-scooters.

This is Westwood’s fourth year participating in the event. Andrew Thomas, the executive director of WVIA said the association decided to bring the event to Westwood because so much public space in LA is dedicated to cars and so little is used for gathering people.

“We take vehicle space and make it people space and there’s something refreshing about it that people really gravitate (to),” he said.

Furey said some residents near the Ministry of Coffee parklet expressed a desire to see the parklet become permanent.

“I have people that live upstairs, they came down, they asked me, ‘Oh, why isn’t this permanent?’” Furey said. “We’d love to see this, and Trader Joe’s loves it so much that they actually donated (a) flower.”

The event provided an area for many community members at the cost of little parking space, said Michael Skiles, president of the NWWNC.

“In the space of a single parking space you can have several chairs and coffee tables. You can set up games and have events for the community,” he said. “We had (this) time as many as 15 guests and volunteers sharing four parking spaces together.”

Julie Wagner, a Westwood resident, passed by the event and said the Park(ing) Day event is a way to get to know the community.

“I was glad to see more community events,” she said, “There’s the Thursday farmers market, but then sometimes if I forget about that, there’s no other good way to get to know your neighbors. This is a perfect space to do that.”

Skiles said although some residents may prefer to have more readily accessible parking than community events, he believes the lack of pedestrian-friendly infrastructures is a more significant issue.

The Park(ing) Day event prompts conversation about permanent changes to how spaces are used in Westwood, Skiles added.

“The WVIA is applying to permanently use their parking space in front of MOC as a sidewalk cafe space,” Skiles said. “Similar programming has led to plans for the southside of Broxton to become a pedestrian plaza like Third Street Promenade.”