Editorial: Napolitano’s tenure has been commendable, can be learned from by next president 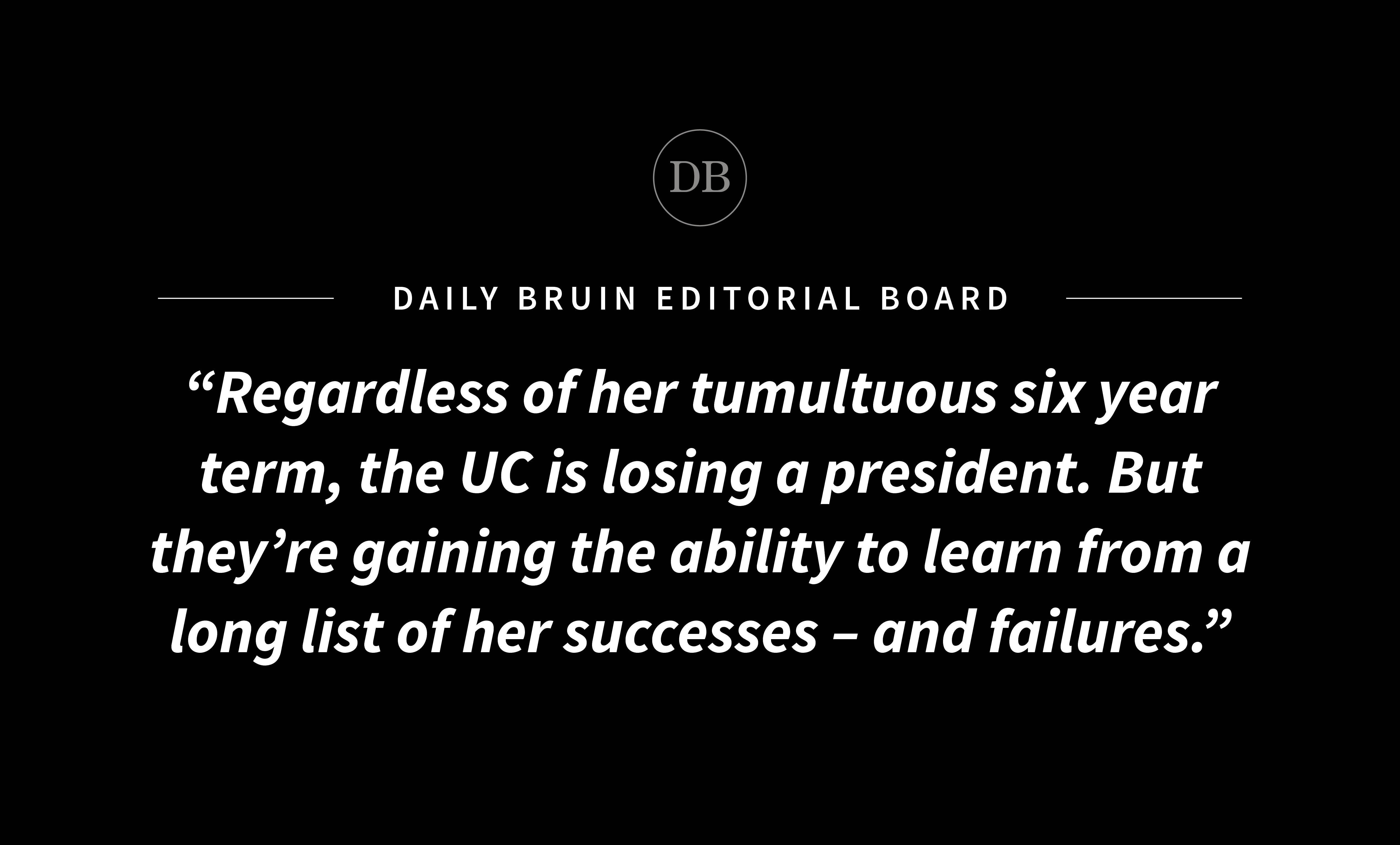 This may be the end of an era for University of California President Janet Napolitano, but her office remains intact and the institution retains its impact.

With that being said – thank you, next.

Napolitano announced at the latest Board of Regents meeting she will be stepping down from her position effective Aug. 1, 2020. Notably, Napolitano is the first woman to take the nearly 150-year-old role.

But paving the way for female leadership wasn’t the only mark she left on the university.

During her time at the UC, Napolitano drew criticism and praise from all sides. She swiftly defended the Deferred Action for Childhood Arrivals program through a lawsuit against the Trump administration in 2017. Then again, her aides also interfered in a state audit of the University of California Office of the President’s finances, leading to backlash from the regents.

Regardless of her tumultuous six-year term, the UC is losing a president. But they’re gaining the ability to learn from a long list of her successes – and failures.

And with a new president to hire, they would do well to keep her track record in mind.

Aside from pledging to protect immigrant students, Napolitano also criticized the Education Department’s crackdown on Title IX procedures that attempted to narrow the definition of sexual harassment.

And though her past record at the Homeland Security department reflected a rise in deportations, the UCOP’s commitment to undocumented students remains a commendable shift in light of Trump-era policies threatening students nationwide. During her term, she effectively became an advocate for these students – a trait that should be expected in her replacement.

But her past experience in federal government also marked a shift in the qualifications expected of a UC president – more specifically, a shift away from the UC’s purpose. With no past experience in academia, her position ushered in an era of increased focus on fundraising efforts and brand name advocacy for the university.

And while her efforts to bring money in for the UC were commendable, they became indicative of an almost corporate model within a public school system – one the university must be prepared to reconsider during the upcoming hiring process.

We get it. The UC is competitive, with applicants soaring at record numbers and campuses boasting the likeness of top-tier educational institutions. But it’s also a school system first, one that can only live up to its role of enriching higher education through meaningful change directed at problems in the university’s core.

Union workers striked five times against the UC this past year. Mental health infrastructure across all campuses stands in dilapidated shape, and there is still an uphill battle to protect vulnerable students and sexual assault survivors.

And while students begged for institutional reform, Napolitano was busy battling state audits that pointed toward major financial mismanagement and potentially harmful increases in out-of-state students.

So with a new era approaching, there are plenty of policies to continue – whether it be supporting DACA students or sexual assault survivors. Then again, there’s a tenure’s worth of room for improvement.

The search for the next UC president is on.

And they can stand to learn a thing or two from the last six years.