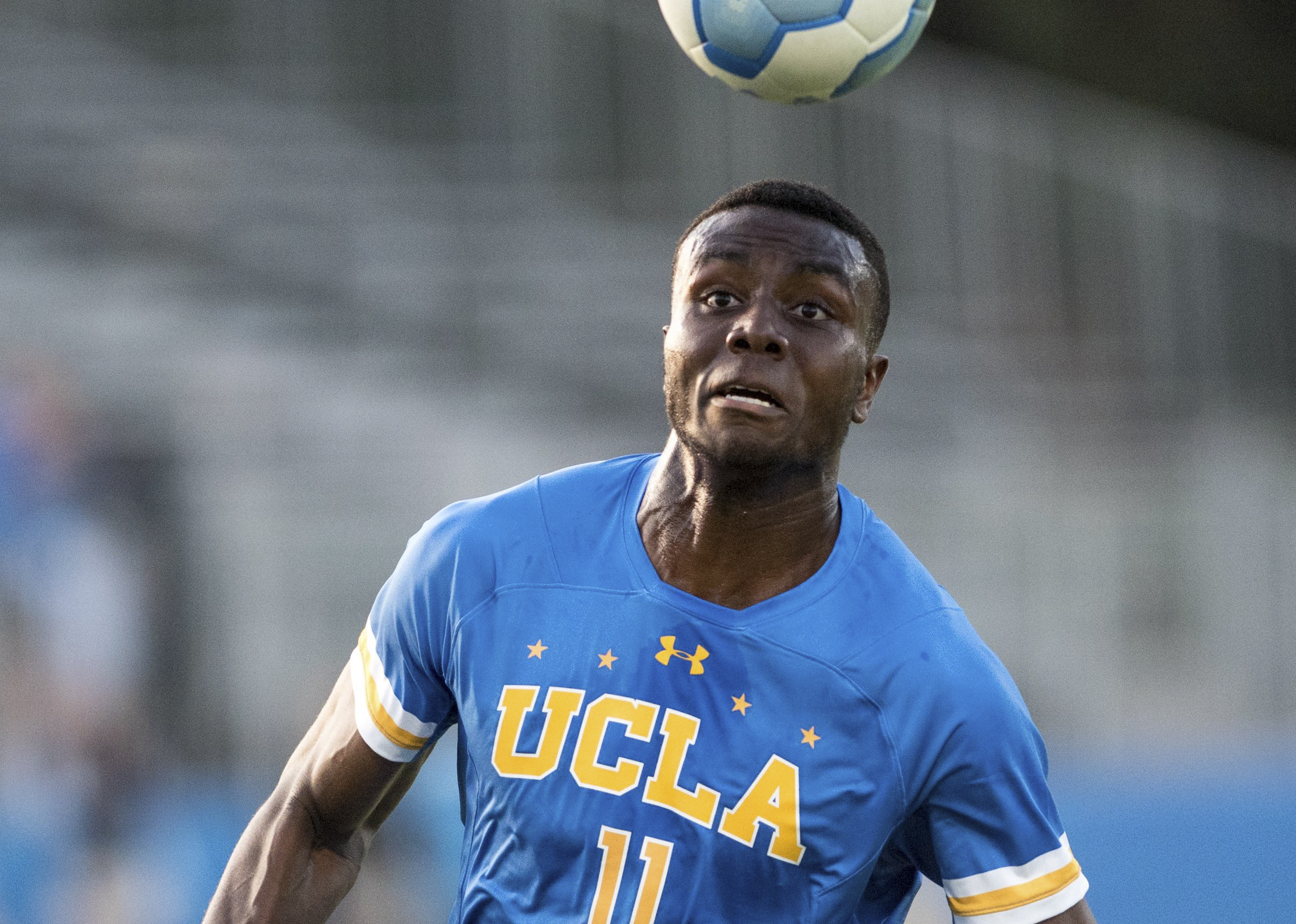 Freshman forward Jefferson Alade heads the ball in his first season as a Bruin after spending time at the Vancouver WhiteCaps FC Residency program beginning in 2016. Alade has come off the bench in four of UCLA men’s soccer’s six games this season, accumulating 132 total minutes. (Niveda Tennety/Assistant Photo editor)

The Bruins couldn’t find the back of the net all weekend.

“(The fault for early goals) is on ourselves,” said coach Ryan Jorden. “At Oregon State, we failed to clear a ball that would have been very easy to clear. At Washington, we played a ball right to the middle of the field, giving it to the opponent, and got it stuffed down our throats.”

Despite the Bruins possessing the ball for much of the first half in Corvallis, Oregon, the Beavers jumped out to a two-goal lead in the first half. The first goal came in the second minute, courtesy of Oregon State midfielder Joel Walker.

“It puts us in a tough position,” said junior defender Ben Reveno. “Having to chase the game for almost the whole 90 minutes if you’re down is pretty tough to come back (from).”

In the second half, the Beavers kept the Bruins at bay, with all five of the Bruin’ shots coming after the 70th minute.

UCLA tallied four shots on target over the entire game, on par with Oregon State.

“We had a lot of opportunities,” said freshman forward Jefferson Alade. “We had a lot of good chances and we dominated possession for most of the game. (But) being down early changed our tactics from the start so we had to play a different way.”

Playing in Seattle on Sunday, the Bruins again found themselves trailing early in their game against the Huskies.

Before the first minute had elapsed, Husky midfielder Lucas Meek notched his fourth goal of the season after slotting home a ball that was chipped over a retreating Bruin backline. For the second time this weekend, UCLA was trailing its opponent from the start.

Washington didn’t stop there, as they scored two more times before the half was over.

“I would say naive is the best word (to describe us),” Jorden said. “We didn’t understand the nature of the game. Washington wanted us to do certain things, and we did them and obliged. The space that was available to us was behind them and we didn’t want to hit it there.”

In the 12th minute, Washington pushed its lead to two goals after defender Freddy Kleemann finished off a Husky corner kick with a header into the bottom right corner.

Washington remained quiet for the next 29 minutes until Husky midfielder Imanol Rosales pushed the team’s lead to three. Rosales dribbled the ball into an empty net after stripping UCLA redshirt sophomore goalkeeper Cameron Douglas of the ball.

The Bruins didn’t register a shot the entire half, while the Huskies peppered UCLA’s goal with 11.

“They had blocks in the midfield and were looking for our centerbacks to play inside,” Reveno said. “It was tough because every time it would go to our outsidebacks, they would just shift and the only thing we could do was go backward.”

Washington added two more goals in the second half – one of them a penalty kick and the other a volley after Garces had blocked the initial shot.

“As a team, we are just getting used to (Jorden’s) system,” Alade said. “Some of the opportunities where he would want us to create chances, we didn’t exploit it when we should have.”

The last time the Bruins lost their first two conference games was in 2017. That year, the UCLA finished 7-10-1 – its lowest winning percentage since 1948.

“We just have to trust what (Jorden) is saying,” Reveno said. “I personally believe that (possession) is the best way to play football so if we are all bought into it, we can get better results.”