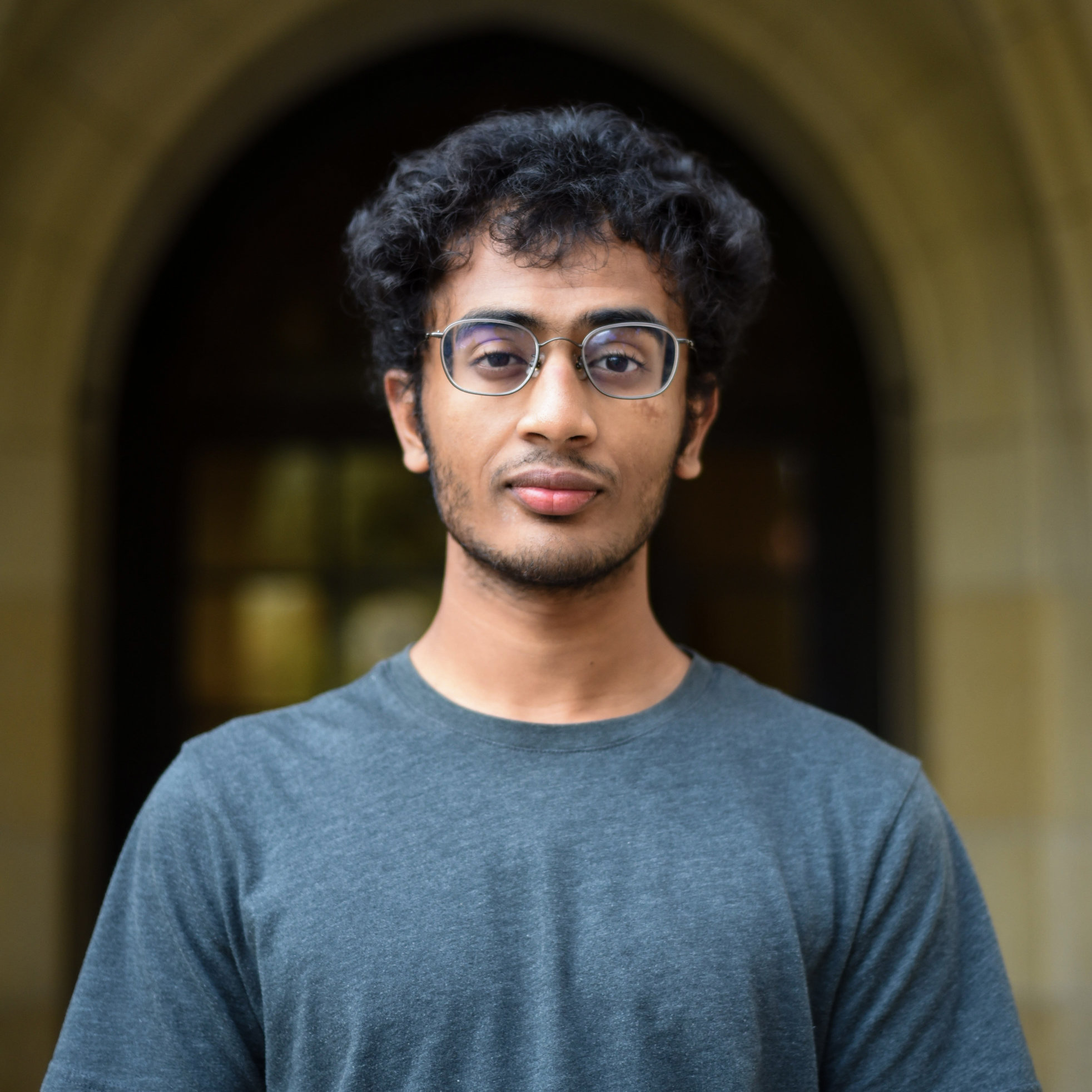 Just when it looks like the Bruins are going to finish the game with 14 points for the fourth-straight week, something wild is going to happen.

Washington State could fumble while trying to take a knee and let UCLA bring it back for six. Sophomore quarterback Dorian Thompson-Robinson could throw a 75-yard Hail Mary with time expiring, or maybe redshirt sophomore Austin Burton will be in for garbage time by then.

With so many good options out there, I’m going to put my money on Washington State punter Oscar Draguicevich stepping out of the back of the end zone for an intentional safety.

All I know is one: this won’t be a competitive game, and two: The Bruins are going to have one or more plays that are so head-scratchingly bad, I won’t be able to stop myself from laughing. I want – more than anything in the world – for those to both wind up being false, but that’s just where we are this season.

Even when UCLA kept it close against San Diego State and Cincinnati, the offense was so lethargic that the team might as well have been down by 50. And when the unit does put together a good possession, and Thompson-Robinson makes a string of great throws, it only lasts one drive before coach Chip Kelly puts it in park for the rest of the game.

I don’t know what it is about this team that inspires such little hope – trust me, I wish I had some – but I can comfortably say the air raid is going to run the Bruins into the ground.

UCLA is going to win a football game this season, but it won’t be this one.

After a 34-point drubbing at the hands of No. 5 Oklahoma last weekend, the Bruins must now head to Pullman, Washington, in search of their first victory of the year. Unfortunately for UCLA, No. 19 Washington State and an offense that is currently averaging 49.3 points and 476 passing yards per game stand in the way.

For years, Cougars coach Mike Leach has had his quarterbacks putting up video game-like numbers, and this year is no different. Washington State quarterback Anthony Gordon is completing 78% of his passes through three games, and has more than 1,300 passing yards to go along with his 12 touchdowns.

Comparatively, the Bruins have 556 passing yards and five passing touchdowns this season.

And if this isn’t enough to convince you that UCLA is in trouble this weekend, I am here to remind you that Jacksonville Jaguars quarterback and mythical legend Gardner Minshew was a Cougar last season.

Minshew picked up the win in his second-career start Thursday night, which can only mean that Washington State has all the good juju on its side heading into Saturday.

Honestly, I’ve only seen one UCLA football game this year because two of the first three coincided with women’s soccer matches.

But as I have learned from my occasional score checks at Wallis-Annenberg Stadium, the Bruins are not going to win. Not even close. They might have another strong first quarter, they will almost definitely make a few impressive plays, but then they’ll fall apart at the seams. Again.

Washington State’s offense has gotten most of the attention this year, but its defense has been just as much a part of the Cougars’ 3-0 start.

To be fair, Washington State has opened 2019 against New Mexico, Northern Colorado and Houston – not exactly the most challenging slate – but still, the Cougars have forced nine turnovers in three games.

Meanwhile, UCLA has turned the ball over eight times already. The math doesn’t look good for the Bruins.

The only thing that might save UCLA is its running game, specifically redshirt senior running back Joshua Kelley. Washington State leads the Pac-12 with 162.7 passing yards allowed per game, but ranks ninth with an average of 183.7 rushing yards allowed.

Maybe Kelly and the Bruins will take advantage of that. Maybe they’ll turn it around for their conference slate. Maybe they’ll make students want to come to the Rose Bowl again.

But I doubt it. And I’m guessing after this game, I’ll still prioritize soccer over football every time their schedules conflict.

What do I know about football? Basically nothing.

I know that UCLA has scored 14 points in the previous three games. As a statistics student, I have no option but to conclude that the Bruins will score 14 points Saturday night as well.

What I do know about football, however, is that it is easier to take good pictures of the better team. By the end of last week’s game at the Rose Bowl, I had become an Oklahoma fan. Believe it or not, dropped passes and fumbles look even worse through a camera lens than they do from the bleachers or on television.

Washington State – and don’t let the name fool you, because this place may as well be in Idaho – is a ranked team, and UCLA is not. As a student at the No. 1 public university in America, I know that rankings matter, so the Cougars will definitely win.

By how much? I used a random number generator to select a number between 14 and 48, then picked the first value that could be the sum of sevens and threes. So 34 it is.

And when Sam Connon – our Sports editor with whom I travelled 21 hours to a wheat field to photograph this game – messages me after the final whistle asking for a photo of Thompson-Robinson, I will have no option but to choose one in which he looks like a deer in headlights, running away from an army of Cougars. 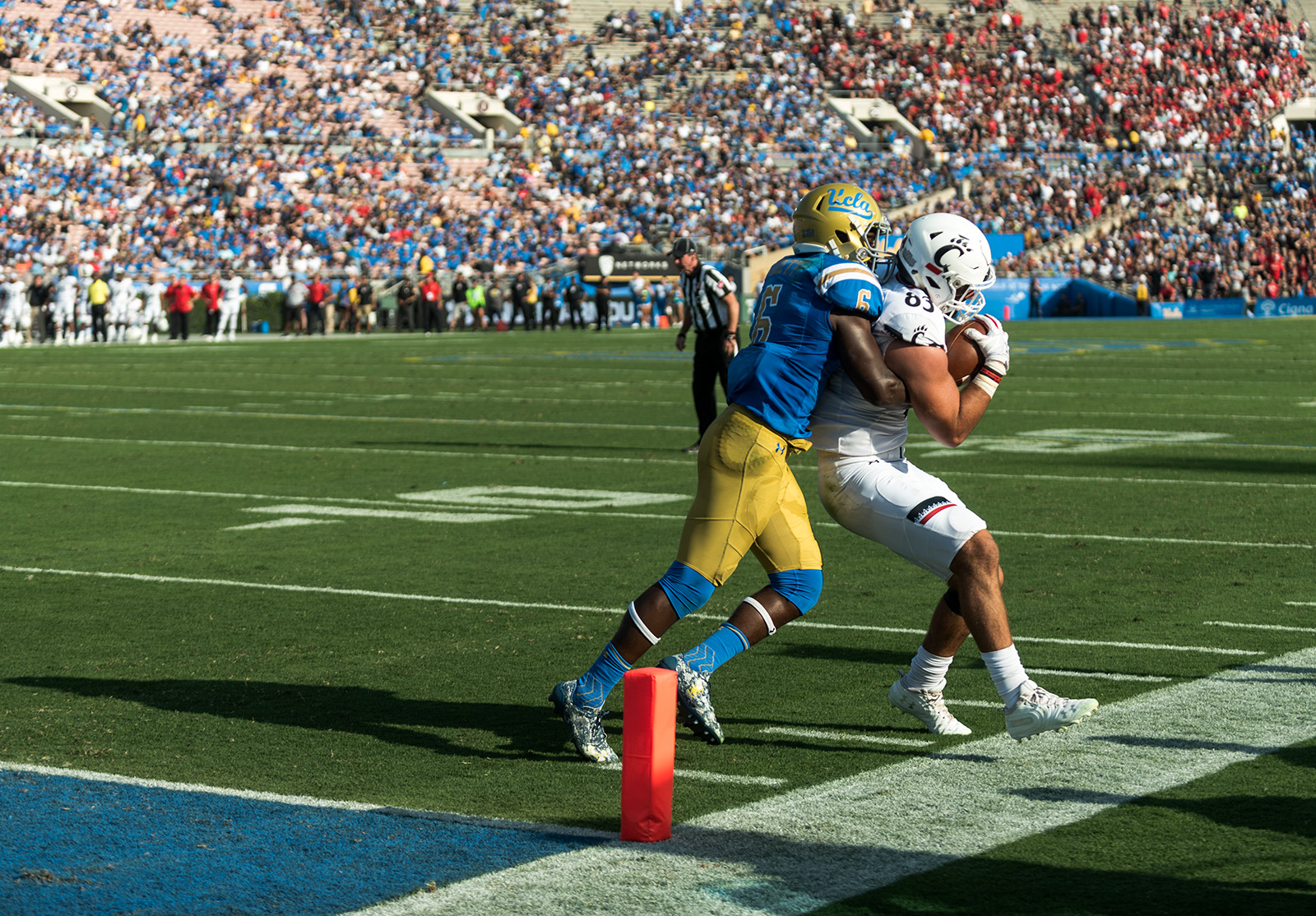 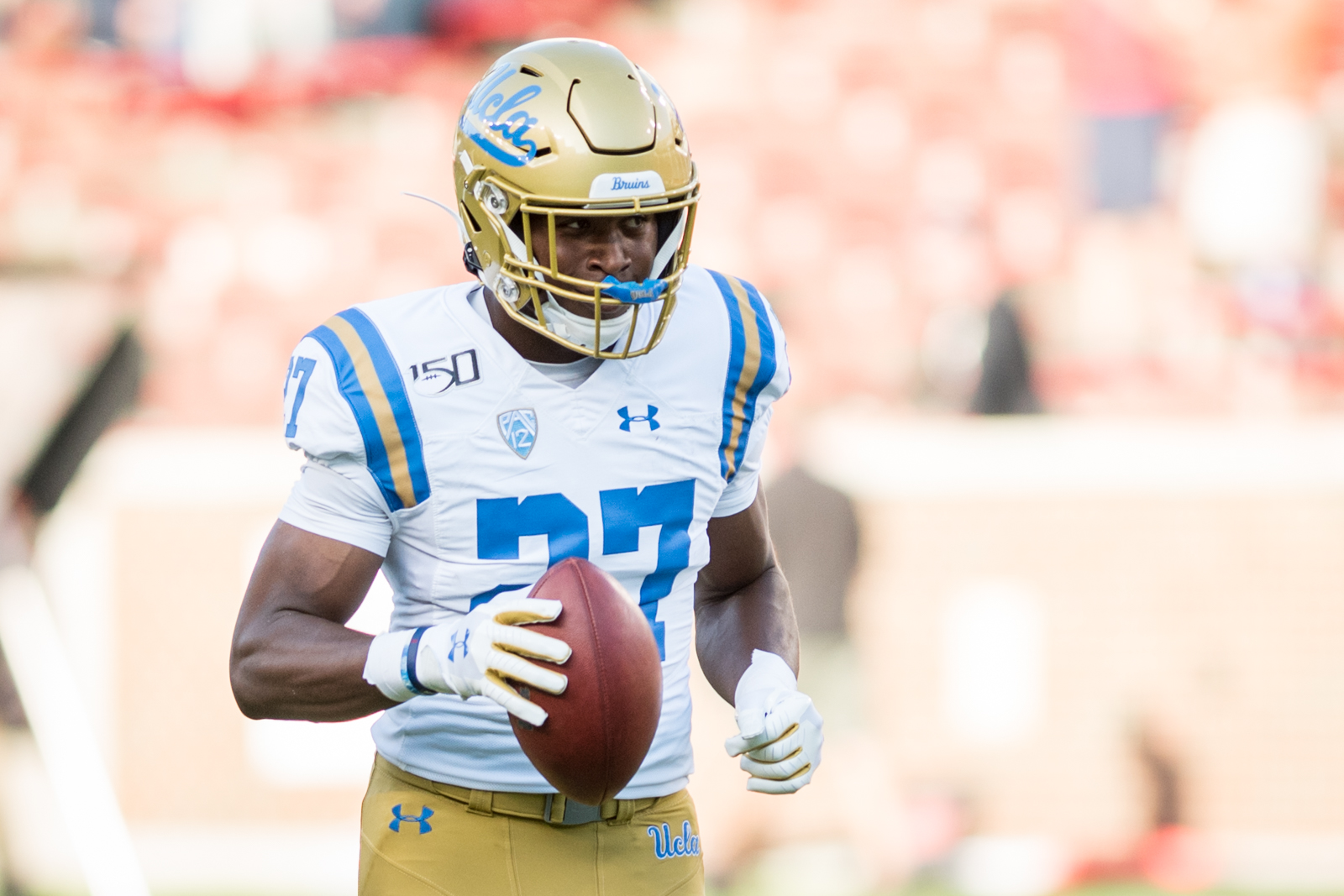