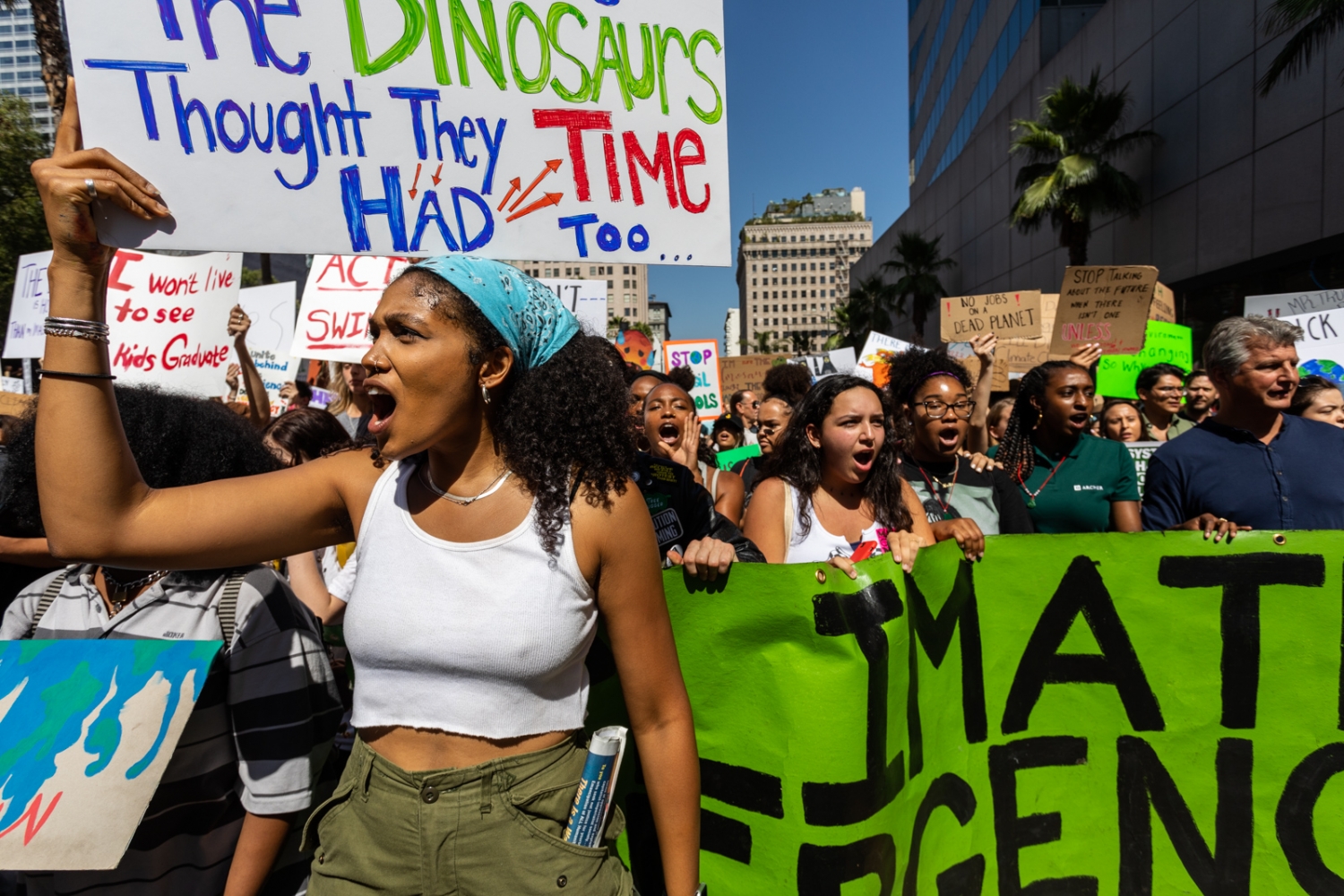 Thousands of students and activists filled the streets of Downtown Los Angeles on Friday to join the global climate strike, urging politicians to take action to combat climate change. 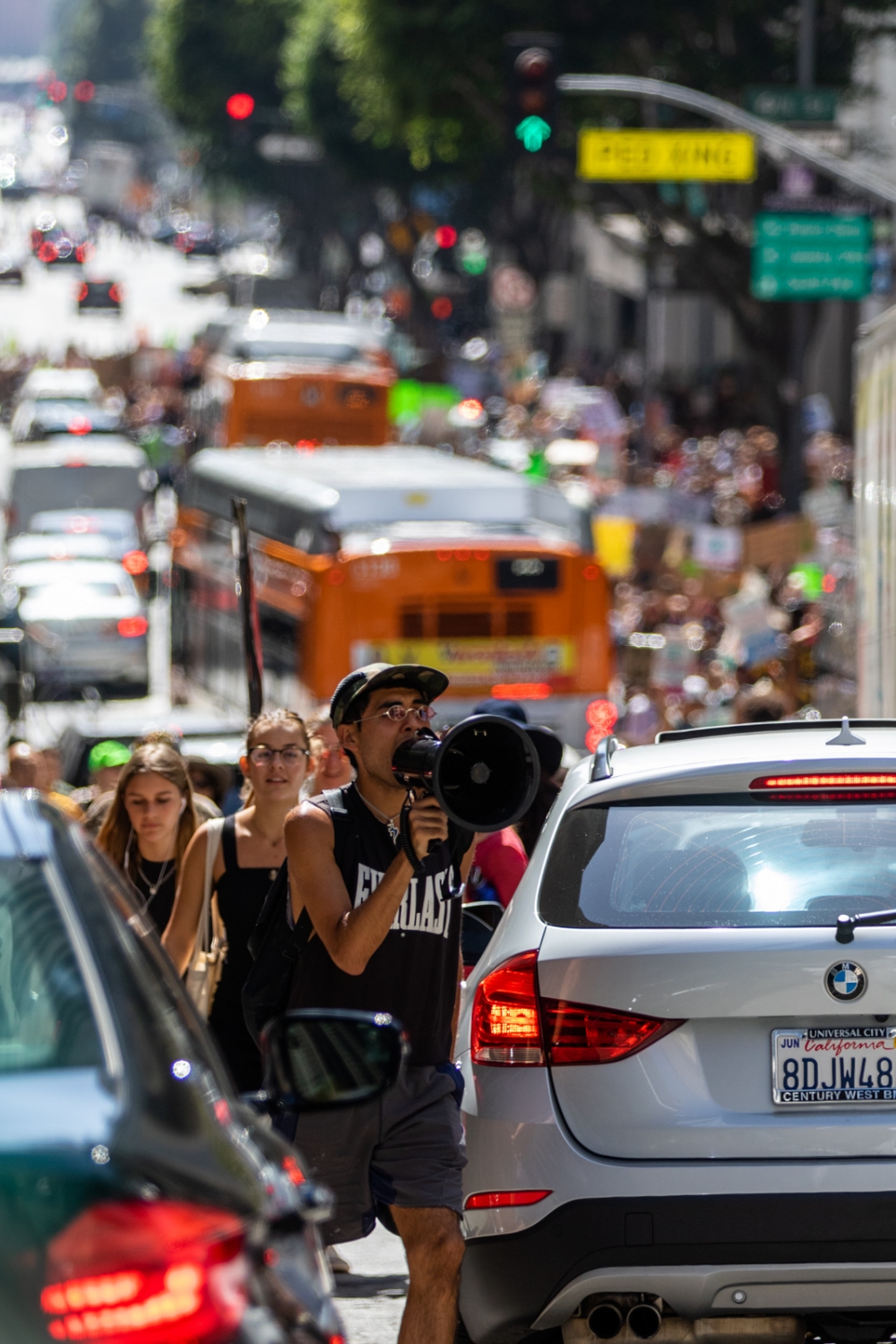 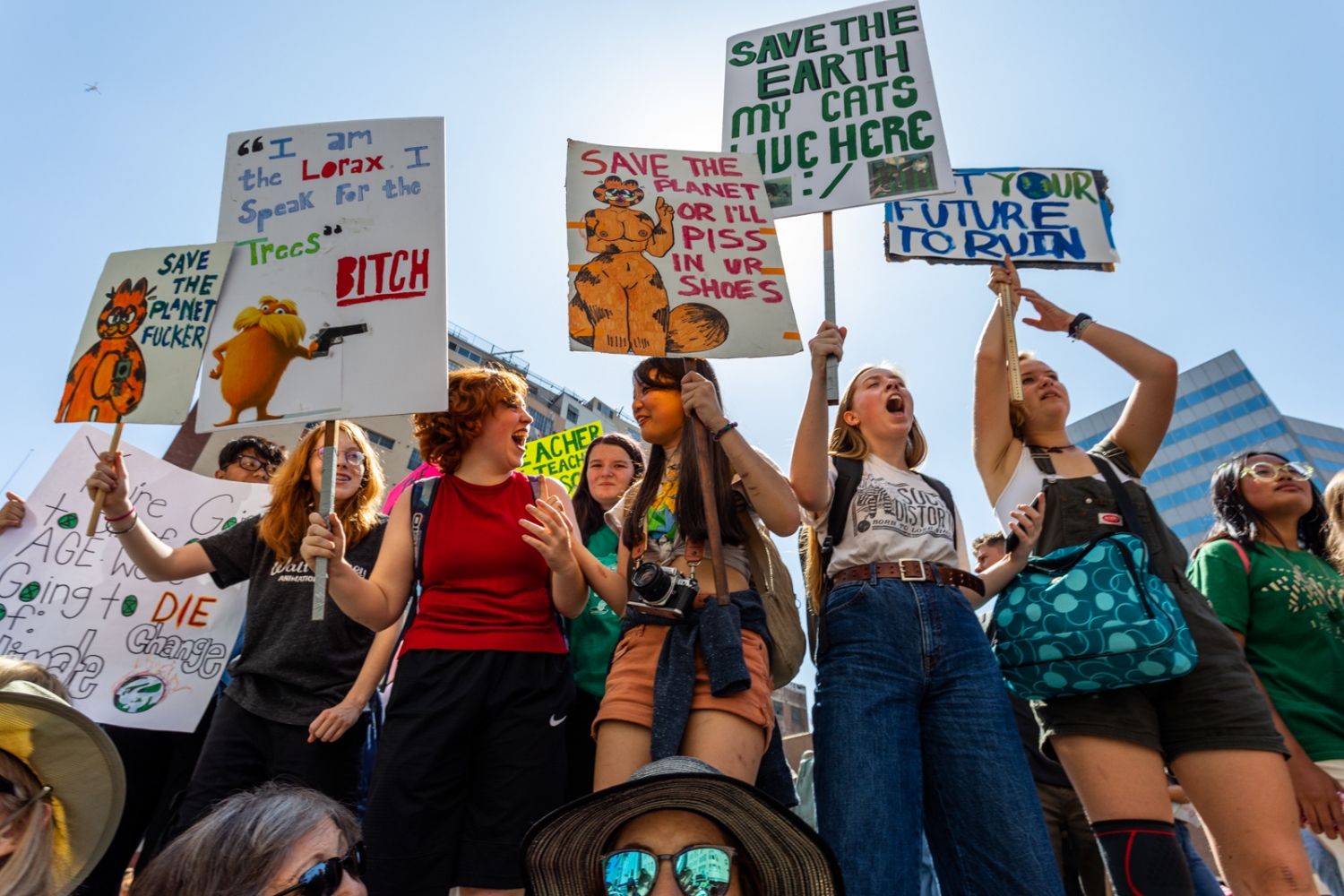 Dozens of students from the Ramón C. Cortines School of Visual and Performing Arts and one from the Los Angeles County High School for the Arts ditched class to join the global climate strike on Friday. Los Angeles Unified School District held a ''walk-in day'' to encourage students to advocate for climate policies from class. 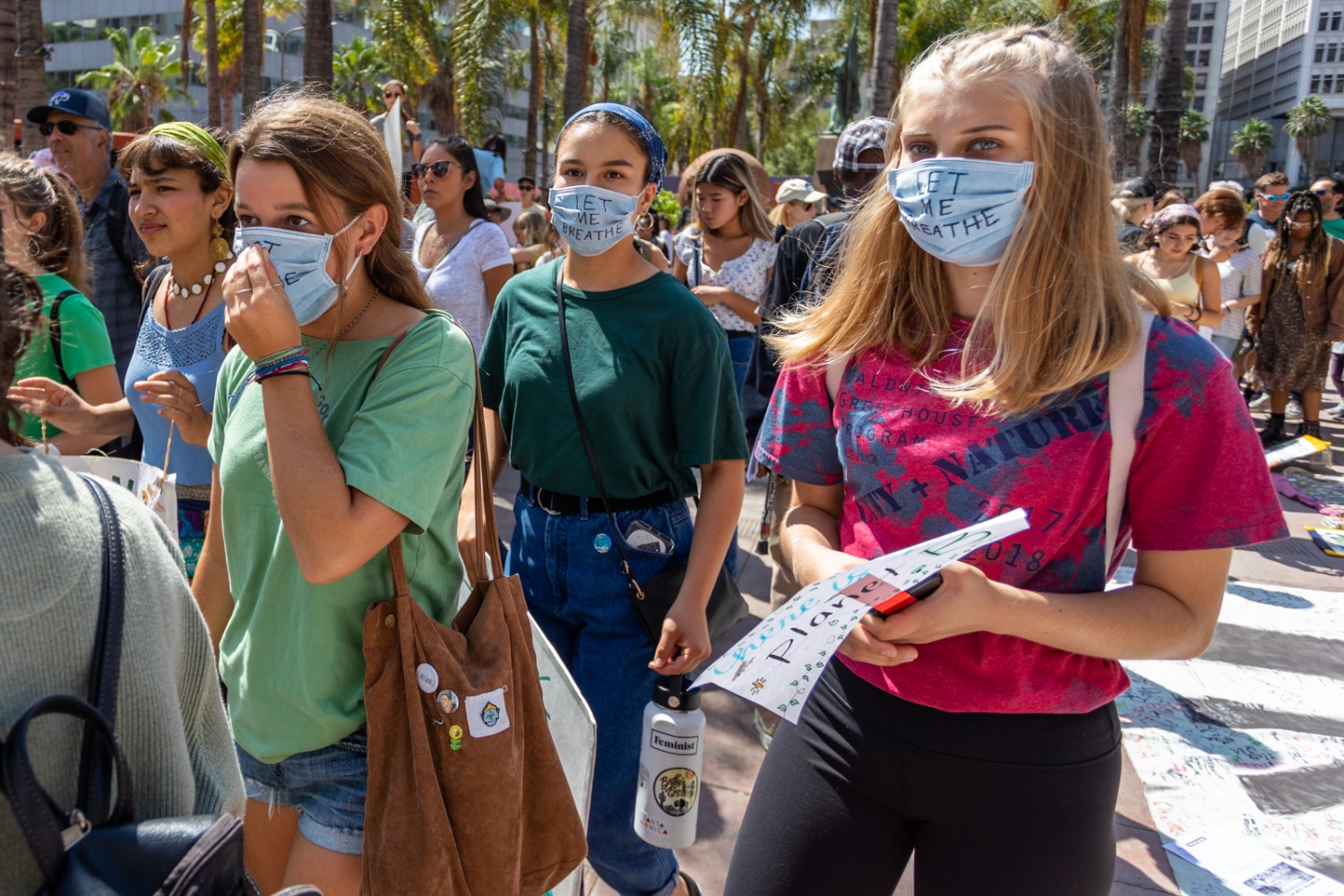 Student protesters wear masks to argue that pollution from fossil fuels is making the air unbreathable. Air pollution is especially prominent in Los Angeles, which has seen increasing levels of smog and ozone in recent years. 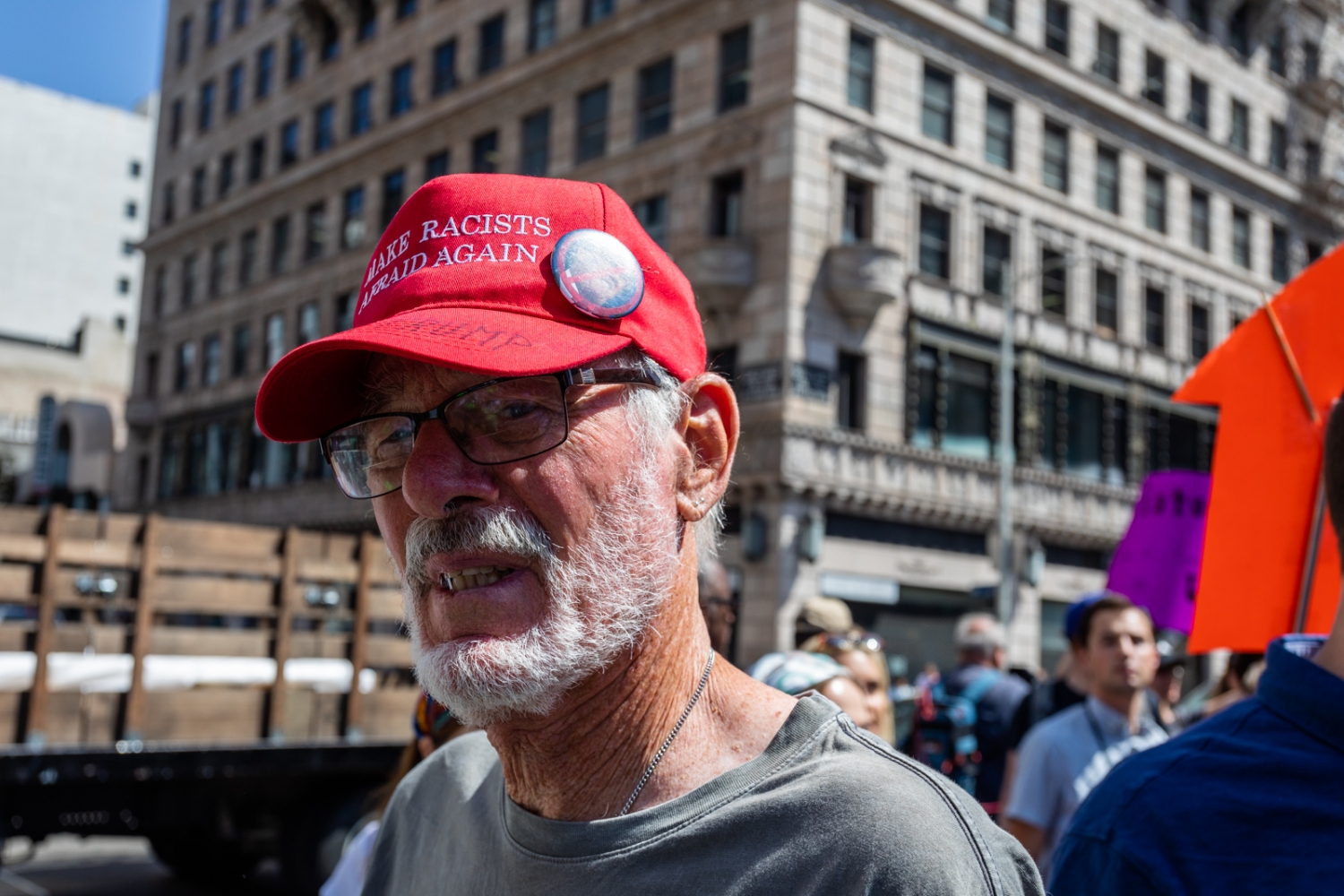 A man wears a red hat lampooning the phrase “Make America Great Again” popularized by the Trump campaign in 2016, instead reading “Make Racists Afraid Again.” Hate crimes have increased since President Donald Trump took office, with 7,175 criminal incidents in 2017, compared to 6,121 in 2016 – according to the Federal Bureau of Investigation. 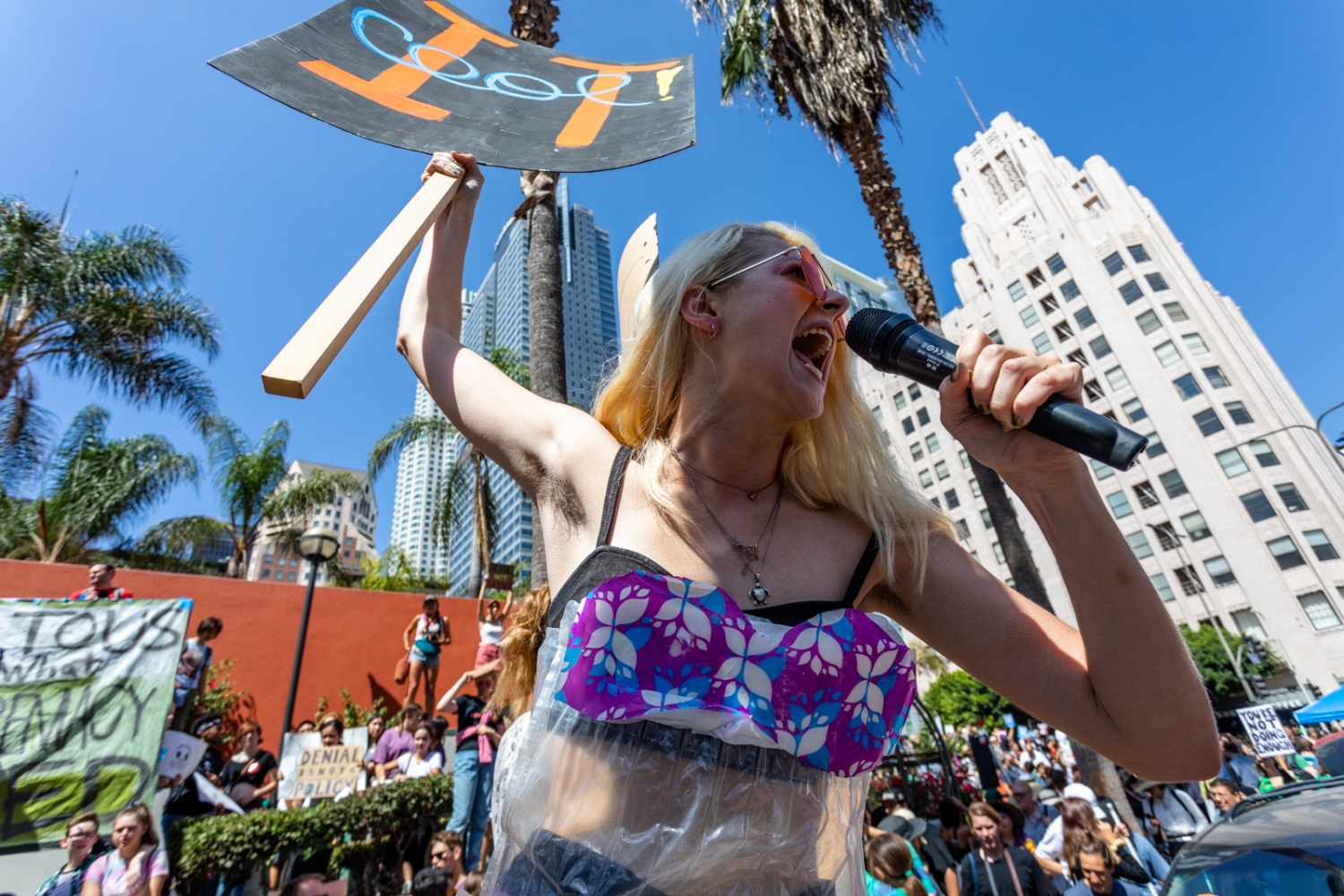 Meagan Evans, a Greenpeace canvasser and recent graduate of Troy University, stands on top of a Greenpeace truck and urges the crowd to consider cleaner alternatives to fossil fuel, other than electric cars. “Your electrical batteries take as much carbon to make as any of these cars use every day,” Evans said. “We need options, we need affordable options.” 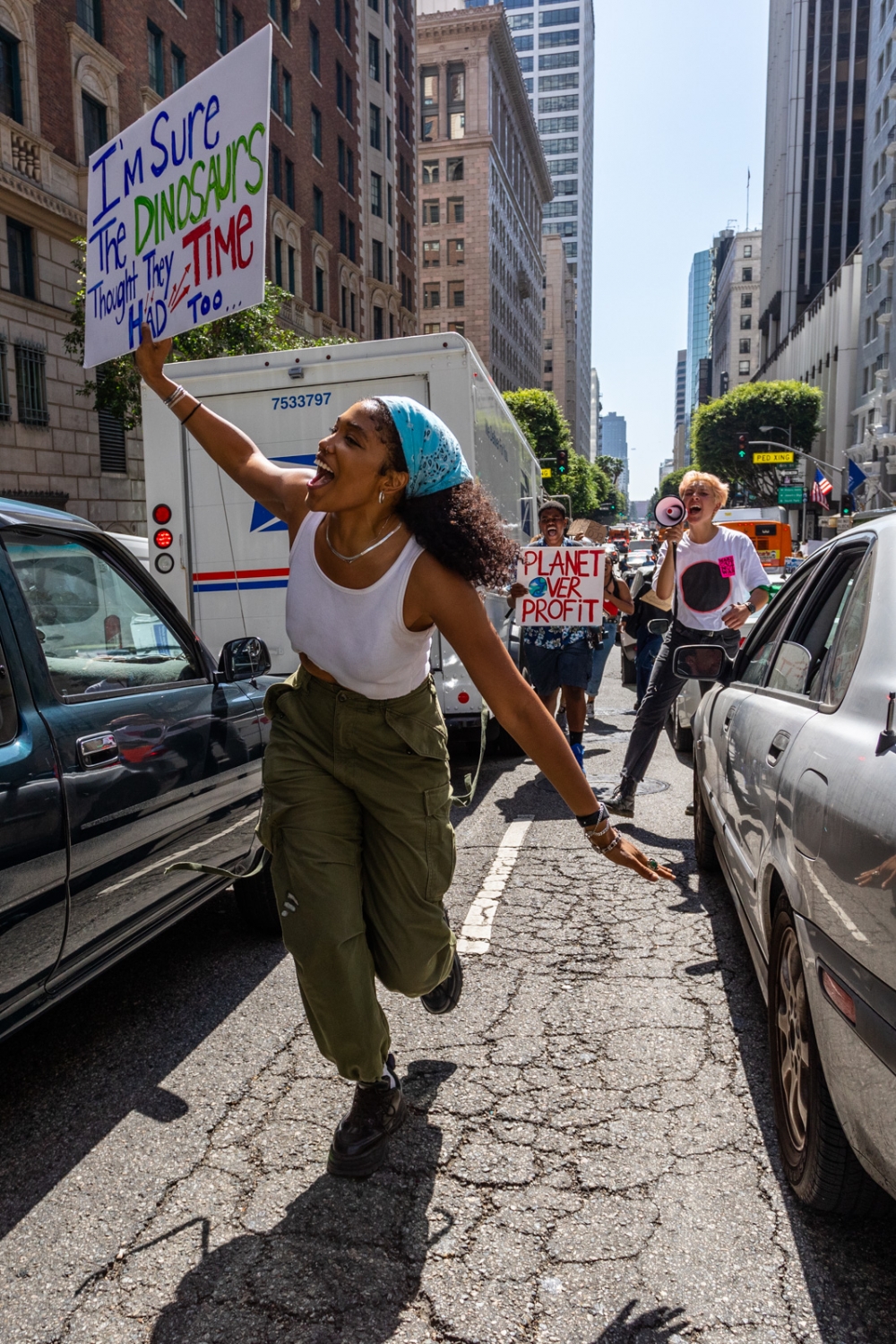 Protesters weave between cars on 6th street that were brought to a stop by the march. Elimination of fossil fuels was central to the protesters’ demands. 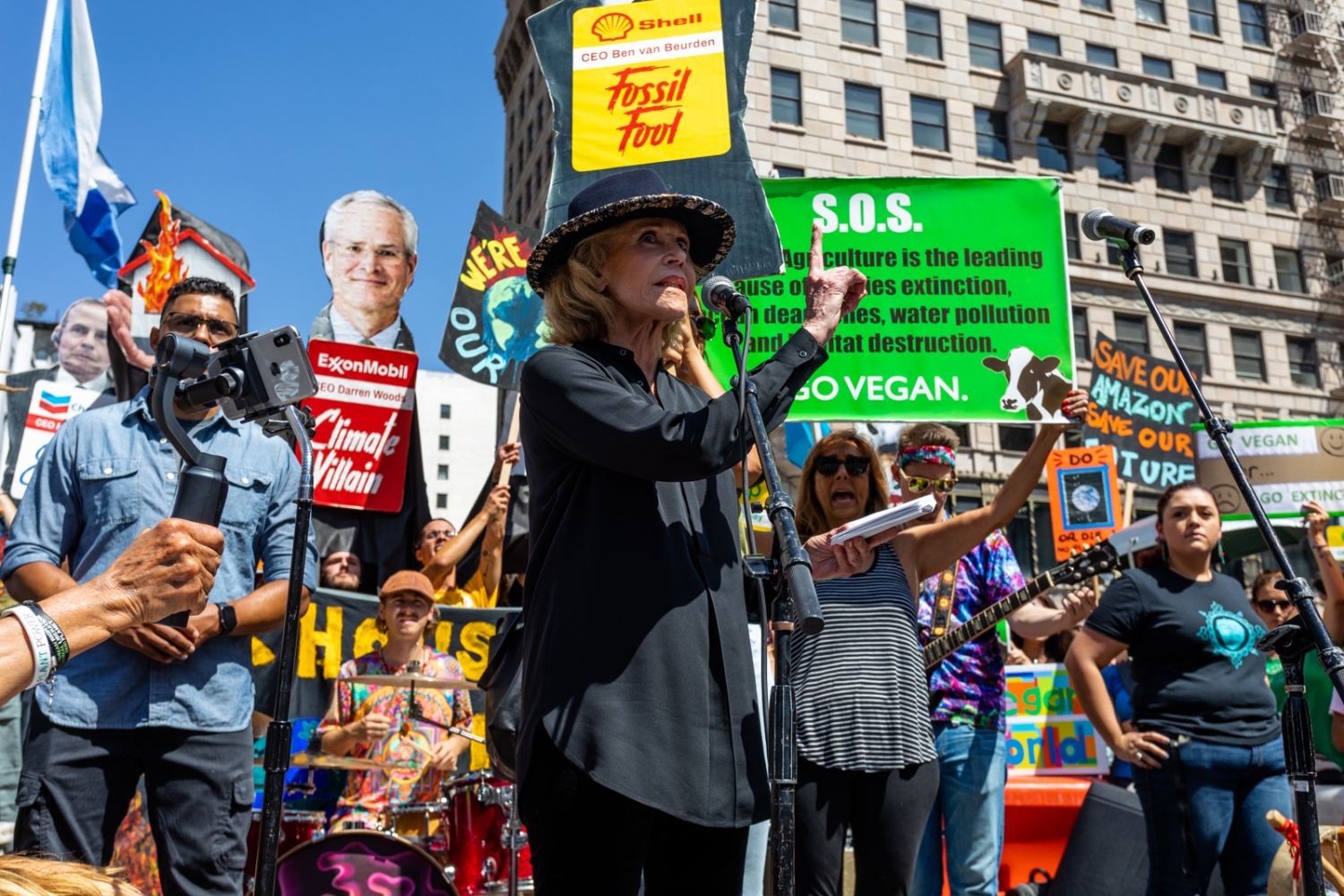 “Beware of candidates who take cautious moderate approaches. It’s too late for that,” actress Jane Fonda, who is a longtime liberal activist, warned the crowd. “Now our houses are on fire – as Greta Thunberg says – and we have to act accordingly and vote for candidates who understand why the scope of the Green New Deal is required.” 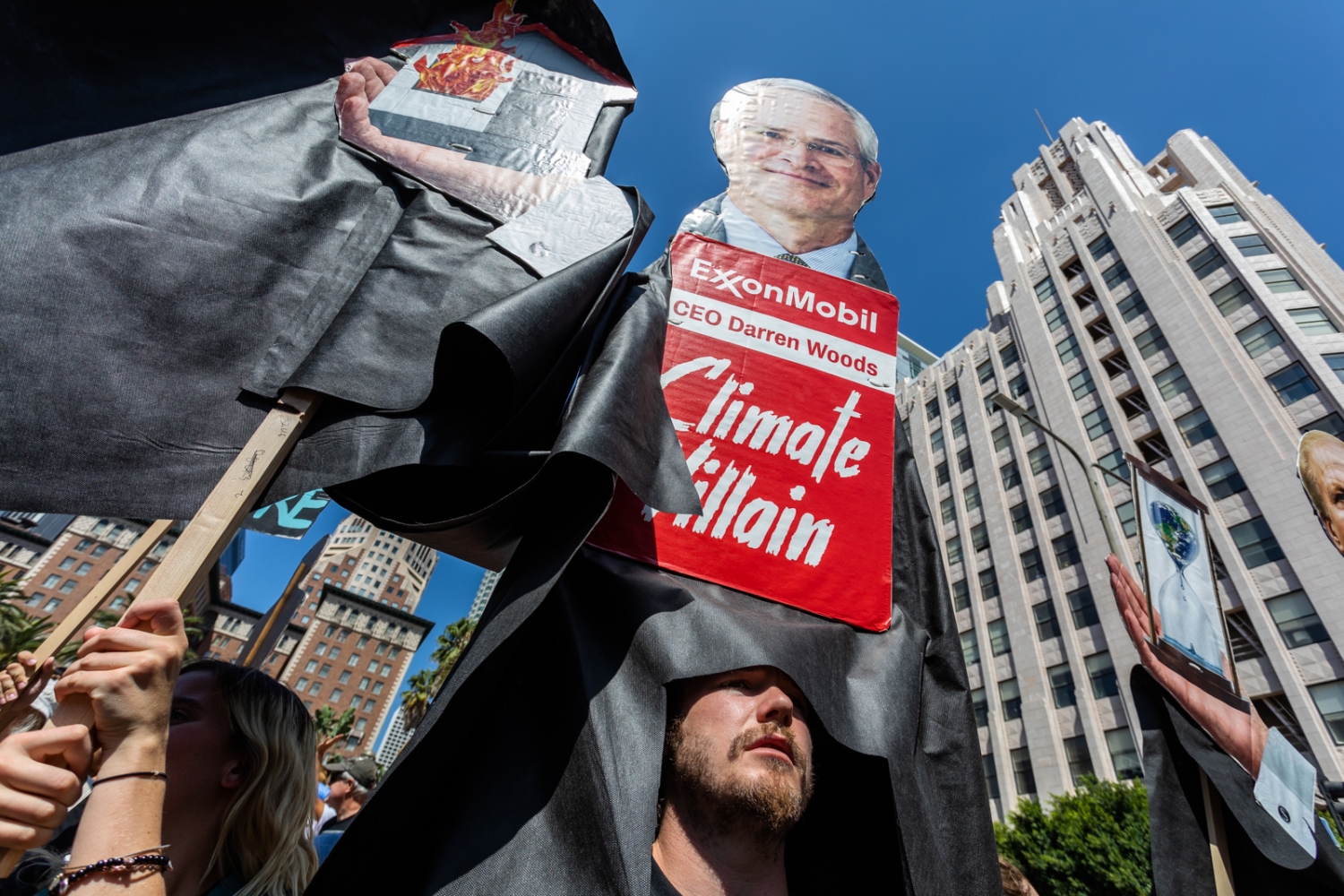 Jimmy Olson, a Greenpeace canvasser, holds up a puppet of ExxonMobil CEO Darren Woods, accusing his company and other oil producers of deceiving the public on the dangers of fossil fuels and air pollution. 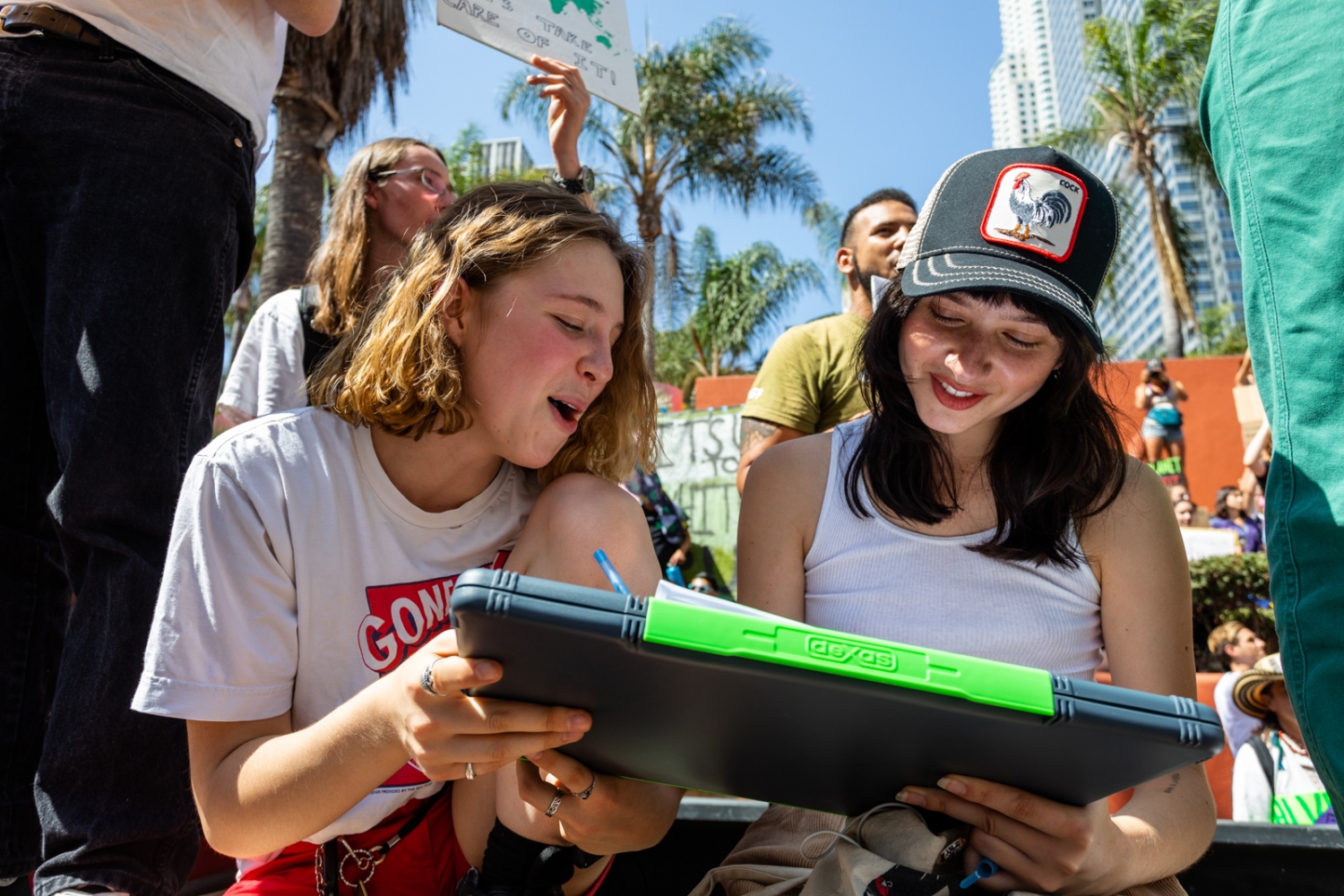 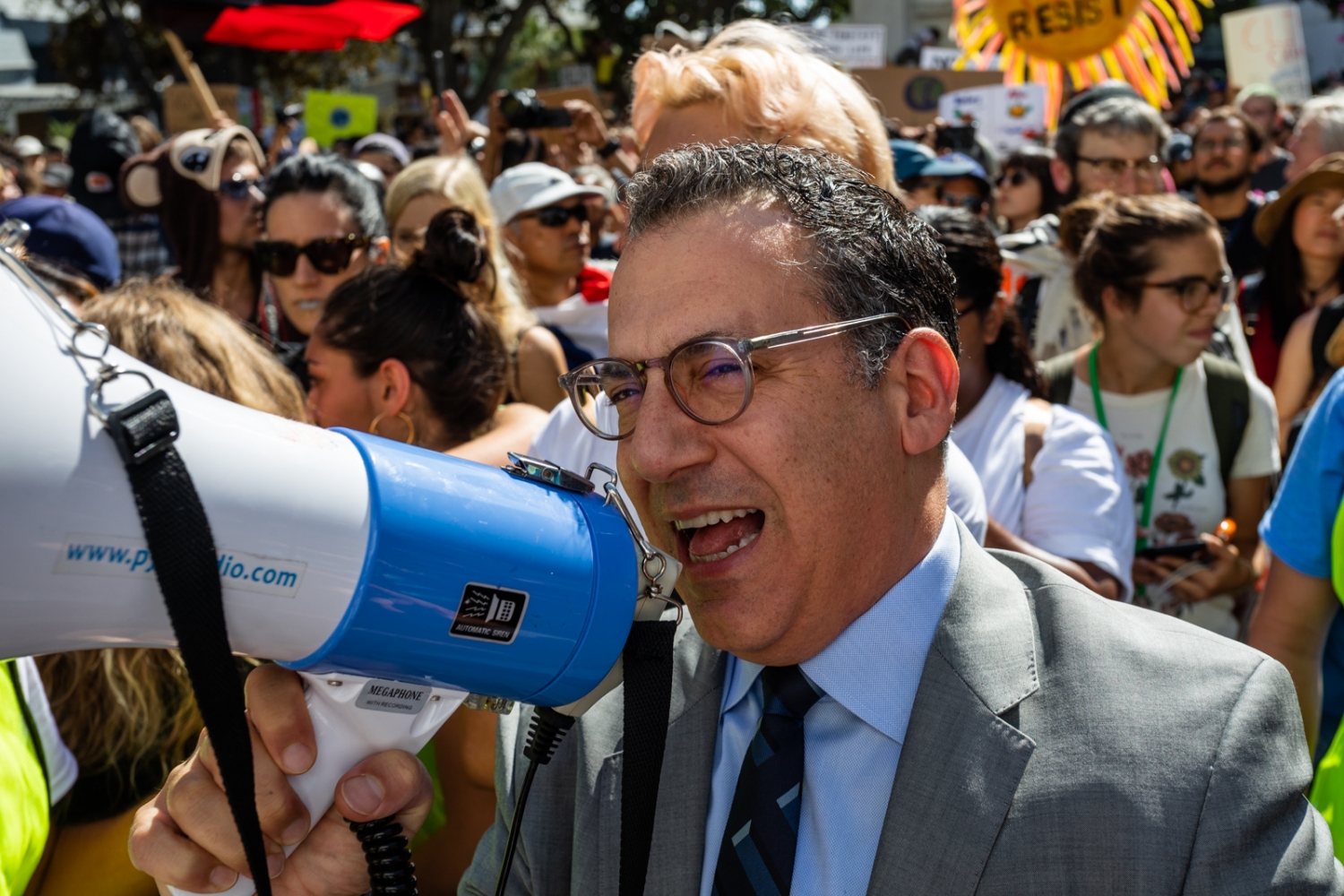 City Councilmember Bob Blumenfield joins the strike. Blumenfield has been active in pursuing environmental legislation, proposing a measure in August to limit the availability of plastic utensils at restaurants and working to ban Styrofoam in the city of Los Angeles. 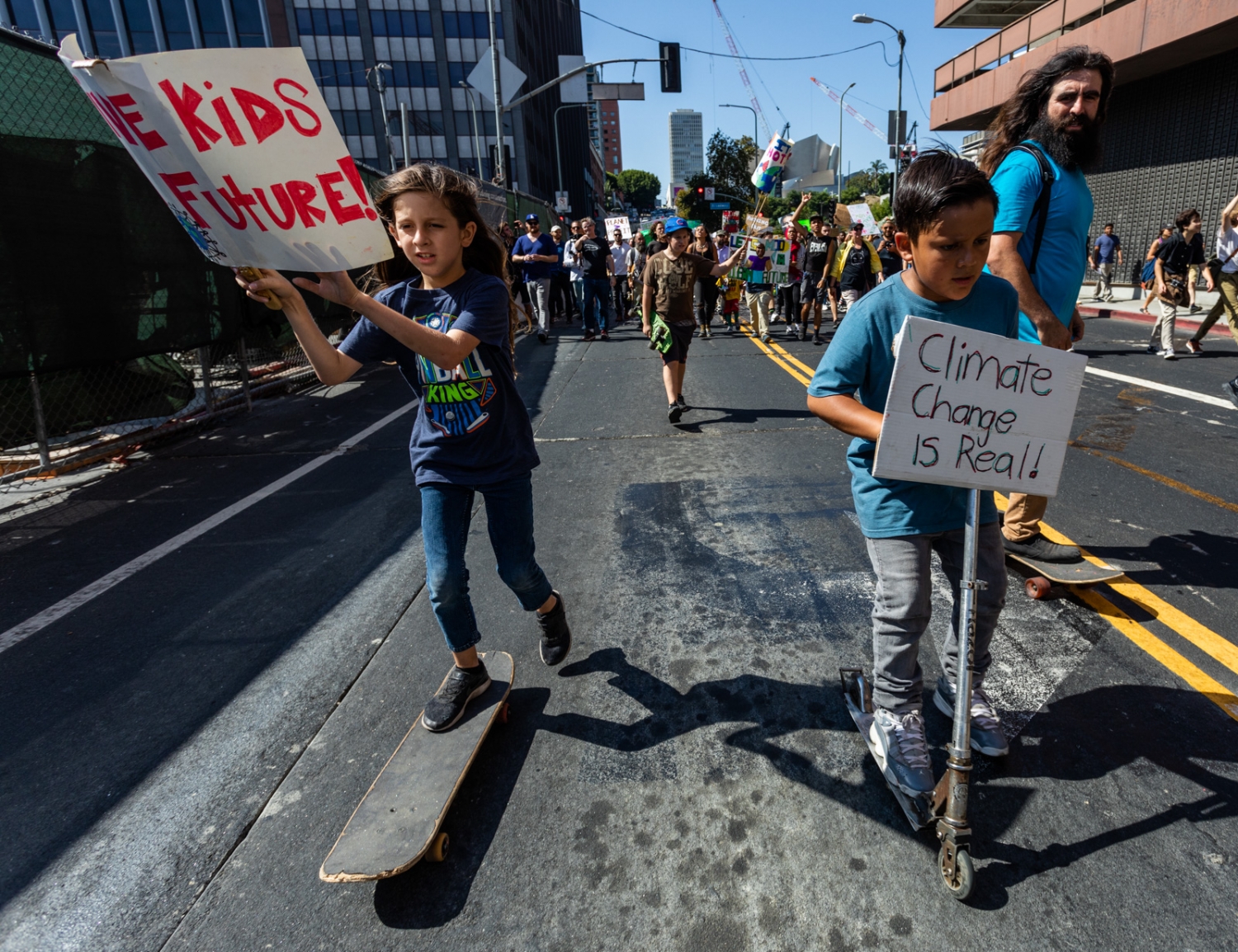 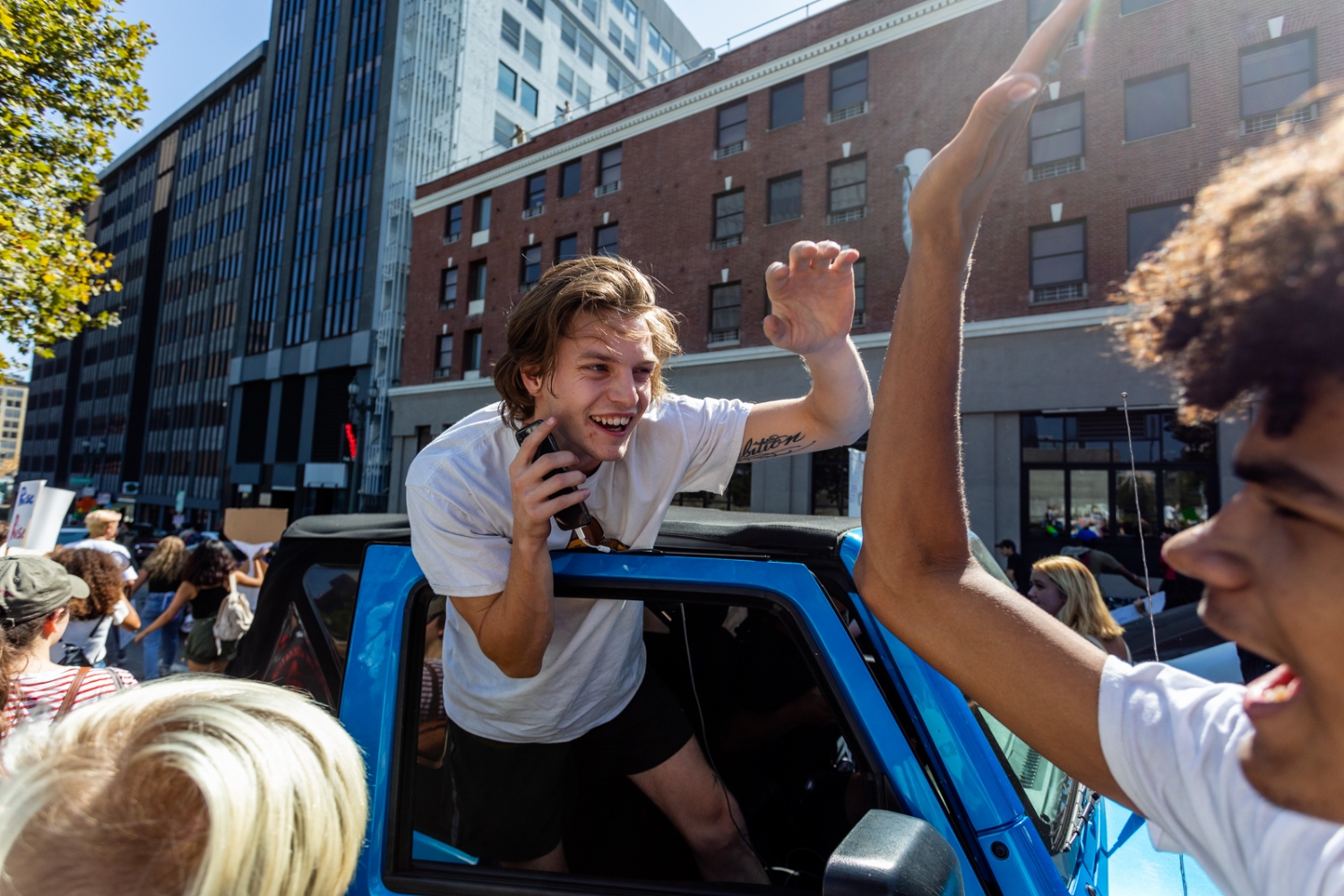 A passenger stuck in traffic high-fives protesters as they march toward City Hall. A spokesperson for the Los Angeles Police Department said the climate strike did not draw any arrests or complaints.