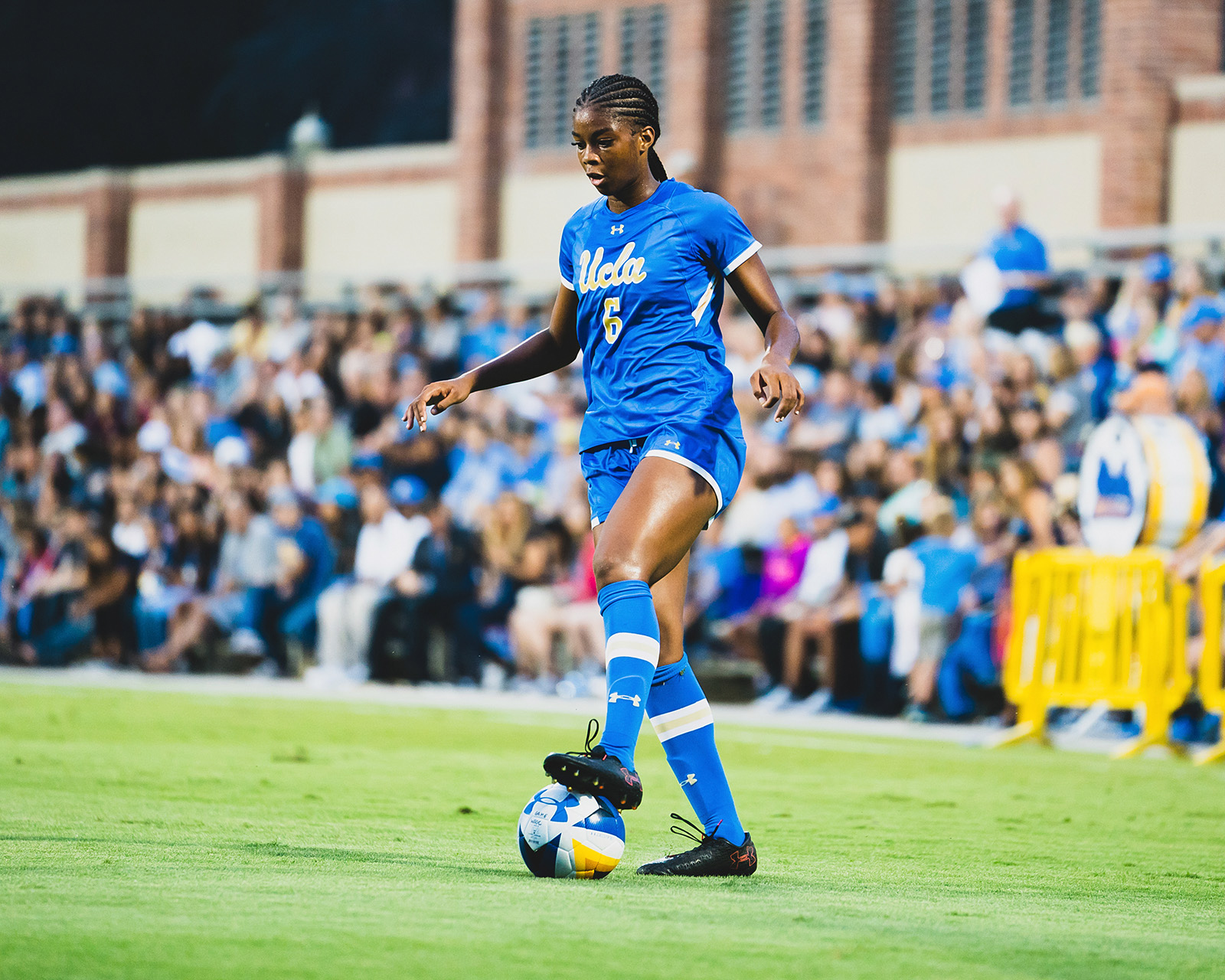 Junior forward Kennedy Faulknor scored her first goal of the season for No. 5 UCLA women’s soccer in its match against then-No. 22 Wisconsin on Saturday, which the Bruins won 1-0. (Isa Saalabi/Daily Bruin)

For the first time this season, the Bruins will play outside California – and the continental United States.

No. 5 UCLA women’s soccer (5-1-0) will travel to Honolulu to compete in the Rainbow Wahine Shootout this week, squaring off against Pepperdine (3-3-1) on Thursday and the host Hawai’i (2-4-1) on Sunday. The matches in Hawaii will be the Bruins’ last nonconference games before Pac-12 play kicks off next week.

Coach Amanda Cromwell said UCLA can benefit most from focusing more on the fundamentals and less on its opponents during this final slate of nonconference games.

“We can’t take anything for granted,” Cromwell said. “We’ve just got to do our thing. Defend well, do all the little things. Just do the basics well. We’re so talented that the rest will come.”

The Bruins’ defense has been a key component for UCLA throughout the early season. The Bruins have notched four shutouts while holding opponents to a .063 shooting percentage, their best mark since 2014. Most recently, UCLA bounced back from its first loss of the season with a 1-0 win over Wisconsin on Saturday, bolstered by a season-high five saves from senior goalkeeper Teagan Micah.

Pepperdine enters Thursday’s match coming off back-to-back shutouts last week, including an upset of No. 2 Stanford on Sept. 13. A header from defender Isabel Nelson was the Waves’ only shot on goal against the Cardinal, but the lone score was enough to hand Stanford its only loss of the season.

UCLA has not lost to Pepperdine its past nine matchups and has held the Waves scoreless seven times in that span, including a 3-0 victory last year. The Bruins have also outshot the Waves 143-67 during that stretch.

Following Thursday’s game, UCLA will take the field against a less familiar opponent in Hawai’i. The teams last played in 2014, with the Bruins winning 6-0. Overall, UCLA has given up just one goal in six matchups with Hawai’i.

The Rainbow Wahine offense has found the back of their opponents’ net just five times in seven games this season. Midfielder Kelci Sumida leads Hawai’i’s offense with two goals.

Despite having never previously played against the Rainbow Wahine, junior forward Kennedy Faulknor said scouting and preparation can play to the Bruins’ advantage.

“We want to recognize how other teams are going to play against us and how we can build around that,” Faulknor said.

Junior defender Delanie Sheehan said the Bruins still have plenty of room to grow and improve.