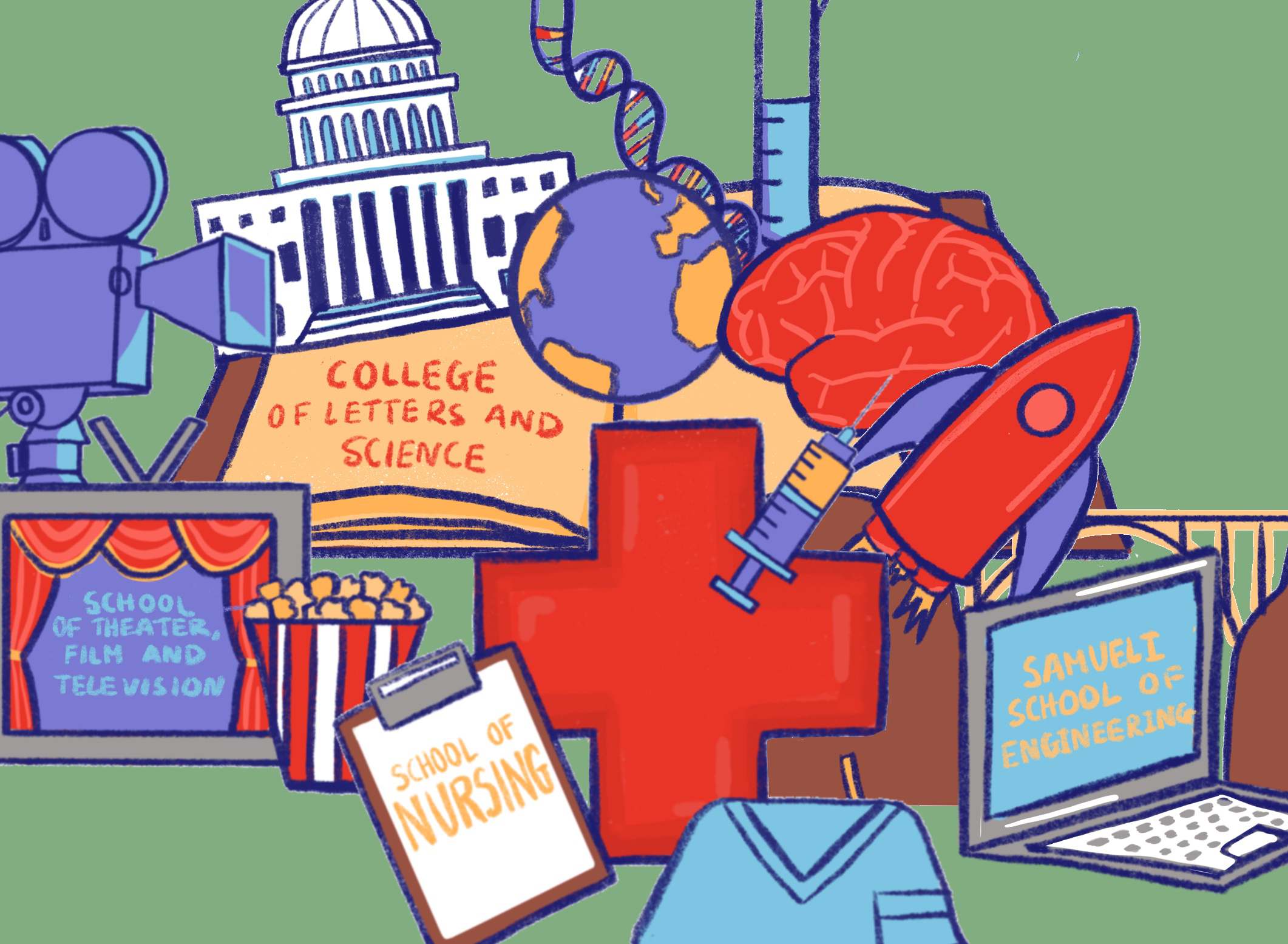 UCLA is already a competitive university, with a first-year acceptance rate of 14% in 2018 – the same as Cornell’s that year.

For students applying to programs outside the College of Letters and Science, however, the bar can be even higher. Here’s a look at three of UCLA’s most selective schools: the School of Nursing, Samueli School of Engineering and the School of Theater, Film and Television.

The nursing program has an acceptance rate of 2% for incoming freshmen. Although around 3,000 people applied for a spot this year, the university only admitted 51 freshmen and 11 transfers.

Nursing is probably more rigorous because at the end of the program, nursing students will take the National Council Licensure Examination and become registered to work as nurses immediately, said Valerie Espinosa, a third-year nursing student and president of the Nursing Students at UCLA.

“They obviously want to put their time into making sure that you learn everything properly, because obviously, you’re going into a field where you’re going to be treating human beings,” Espinosa said. “So you want to make sure that you’re not going to accidentally kill anyone.”

Nursing programs tend to be competitive. Most nursing programs across the country have small cohorts – usually around 22 to 60 students per program – and low acceptance rates, Espinosa said.

UCLA’s nursing school had 604 total students at the start of the 2019-2020 school year. This includes students pursuing their bachelor’s degree, two types of master’s degrees and two different doctorates. Eighty-four percent of the students in the program are women.

Getting into the program can be difficult. Most accepted students have demonstrated in their applications they have experience working in hospitals, although a few haven’t, Espinosa said.

“I kind of knew that I wanted to work in the health care field, whether that be as a nurse, pediatrician or doctor, in some capacity, since like middle school,” Espinosa said.

After applying to UCLA, potential nursing students are sent a separate, supplementary application, which Espinosa said she discovered after hitting “submit” on the general application.

That application takes another week, Espinosa said, and asks questions specific to the nursing program.

But Espinosa said she thinks the program is worth it.

Even professors with 30 years of experience in nursing will tell her they’re still learning new things about the profession, she said.

“Honestly, that’s one of the biggest things for me, like always being able to learn, but also being able to help people and just being there for them when they’re in a very vulnerable time,” she said.

The Samueli School of Engineering is notoriously difficult to get into, with acceptance rates for some majors in the school dipping below 10%. But when she applied, Sydney Chang, a second-year materials science student, said she wasn’t overly stressed.

If she didn’t get in, she’d go to a community college first, she said.

“Community college isn’t a bad place to go,” she said. “(But the process) I think it was relatively easy. Just fill out the application, submit it and hope for the best.”

The most difficult engineering program to get into in 2018 was computer engineering, with an acceptance rate of 6%.

Aerospace engineering was the next lowest, at 7.6%. Computer science had an 8.2% acceptance rate, and students applying to the engineering school undeclared were accepted at a rate of 9.5%.

Because the programs are so selective, the lucky few who get in almost always have high test scores, high GPAs and participate in lots of extracurriculars, Chang said. Some have already pursued internships and even research, she added.

Although most majors are difficult to get into, a few are easier, including materials engineering, which saw 33.1% of its 357 total applicants accepted in 2018.

The largest disproportion came in electrical engineering, whose 2018 incoming class was only 15% female. Bioengineering had the most even distribution, with an incoming class that was 48% women.

The application process is the same as it is for the College of Letters and Science, though the college is generally less selective.

The Hollywood Reporter ranks UCLA’s Theater, Film and Television School in the top-five film schools in the U.S. That might be why it has an acceptance rate of 4%.

The hardest part of the process was the amount of writing the application required, Chou said.

Applicants to the film program submit three supplemental essays: one “life challenge” essay, one essay asking the applicant why they would like to do film at UCLA, and a final creative writing sample or film analysis essay, Chou said.

“I’m kind of a procrastinator,” she said. “And, it was a lot of writing. I struggled with some writer’s block.”

“With the TFT (application), I knew you could be as creative as you wanted to be,” Chou said. “And I’m more of a creative person.”

“UCLA has always been kind of a dream school for me,” Chou said. “And then I didn’t really decide to do film until pretty late. So I was just thinking like, shoot your shot, because you don’t know what’s gonna happen.”

The most successful applicants to UCLA are able to show originality in their work, Chou said.

“Honestly, a lot of times, I still think it’s a fever dream,” Chou said. “And I just struck gold. Like, maybe they liked the originality of my ideas for creative writing. But I don’t know. Maybe it’s just a writer thing. But like, I go back, and every now and I’m like, how was I accepted?”

After the TFT program selects which applicants it would like, it sends that list to the main UCLA admissions office, Chou said. UCLA Admissions then makes the final decisions.