Turning Westwood into a pedestrian mall could resuscitate the dying Village 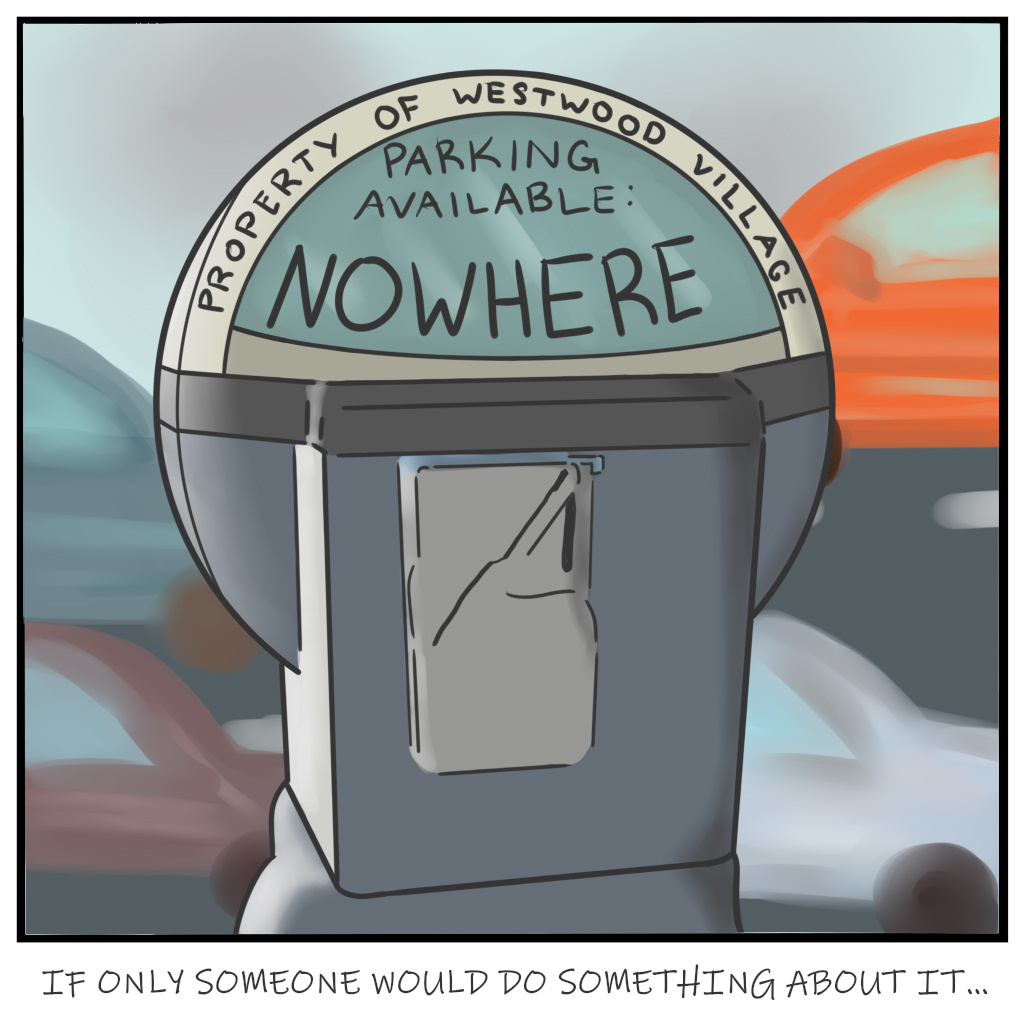 The road to a better Westwood Village is paved with good intentions, but it isn’t getting us anywhere closer to a more vibrant town.

In August, the Los Angeles City Council approved changes to zoning regulations in Westwood. So far, the Department of City Planning intends to make some alterations, which include small tweaks to parking requirements and the definition of a restaurant.

And while these changes should help attract businesses and make the Village a better place, they can’t be the only part of the plan.

For the greater part of the 20th century, Westwood was a thriving shopping area and the movie theater capital of Los Angeles. Competition from newer shopping centers, changes in the movie industry, a shooting in the ’80s, along with other factors led to the Village’s decline.

Westwood Village needs to be boldly redesigned in order to truly revitalize the area – both economically and culturally. In order to do so, the Village must reclaim its streets from the automobiles that currently populate the city. And if it does, it can bring the personal feel back to Westwood and allow Los Angeles’ vibrant culture to take center stage.

By moving away from cars entirely, modernized zoning regulations could reshape the neighborhood by closing streets to traffic and converting them into a pedestrian mall. The Village needs to offer something the rest of the city cannot in order to prevent the outsourcing of entertainment.

If the Village is made into a pedestrian plaza, the boundaries could be set at Le Conte, Gayley and Hilgard avenues – wrapping around the Hammer Museum at Glendon Avenue and Lindbrook Drive and connecting to Wilshire Boulevard. This would enclose an area about half a mile across at its widest point, a 10-minute walk from end to end.

Michael Skiles, president of the North Westwood Neighborhood Council, suggested that while the major streets might not be feasible to shut down immediately or entirely, a more gradual approach could be possible.

“Westwood Boulevard and Wilshire (Boulevard) are always going to be major arterial streets,” Skiles said. “What are now large streets can gradually be narrowed in the place of wider sidewalks and sidewalk cafes. Maybe we can never fully get rid of the vehicles, but make them less overwhelming.”

Not only would a decrease in cars help the economy and culture, it would benefit the environment. In a 2007 research paper “Cruising for Parking,” UCLA distinguished research professor Donald Shoup estimated that looking for street parking in Westwood Village wastes 47,000 gallons of gas and produces 730 tons of carbon emissions every year.

But merely closing the streets will not create the desired transformation.

Santa Monica tried this with the Third Street Mall in the ’60s, but they did not utilize or improve the streets and shops enough to attract people – few events were held, foot traffic was scarce and businesses were unwilling to pay for upgrades. Unsurprisingly, the mall was ultimately a failure.

Westwood would do well to consider Santa Monica’s failures, as well as its newfound success with the more recently opened Third Street Promenade. In order to revitalize the mall, the city let stakeholders into the decision-making process, allowing people to voice how they wanted the area to be zoned and thus bringing in many more customers.

And if approached correctly, the Village without cars clogging its arteries could become a great center of culture.

An outdoor theater could be set up where live music, comedy or local performances could be displayed. Concerts could be held, artists could set up galleries and dancers could make the streets their stage. The possibilities are limited only by the creativity of Los Angeles, which is to say: limitless.

Students and residents alike would also benefit from a new local forum. And with UCLA next door, Westwood has an untapped trove of local artists.

Peter Clinco, a member of the NWWNC and the Westwood Village Improvement Association, believes that the transformation of the Village is inevitable, but additional changes must also be made to the aforementioned zoning regulations.

“The main goal should be to bring more customers to the Village,” Clinco said. “Just turning the Village into a mall probably won’t be enough.”

Some might argue that cutting off car traffic in the Village would make the area inaccessible. But with the Metro Purple Line Extension to Westwood, and bus stops nearby, there will be plenty of options for public transit. Sure, there will be disruptions. Maybe major streets such as Westwood Boulevard can’t be shut down entirely – after all, the Ronald Reagan UCLA Medical Center is right next door with an emergency room that ambulances need access to. But emergency vehicles could be rerouted to Gayley Avenue, and specific emergency paths through the Village could ostensibly make access easier. With just a little creativity, the Village could still be accessible – to emergency vehicles and customers alike.

It’s no secret that the decades haven’t been kind to Westwood Village. But by closing the Village to cars, designating it a pedestrian mall and unlocking its cultural potential, what is now a ghost town can again become a bustling center of entertainment and commerce.

Westwood needs to go in a new direction to be revived; and where it’s going, it doesn’t need roads.