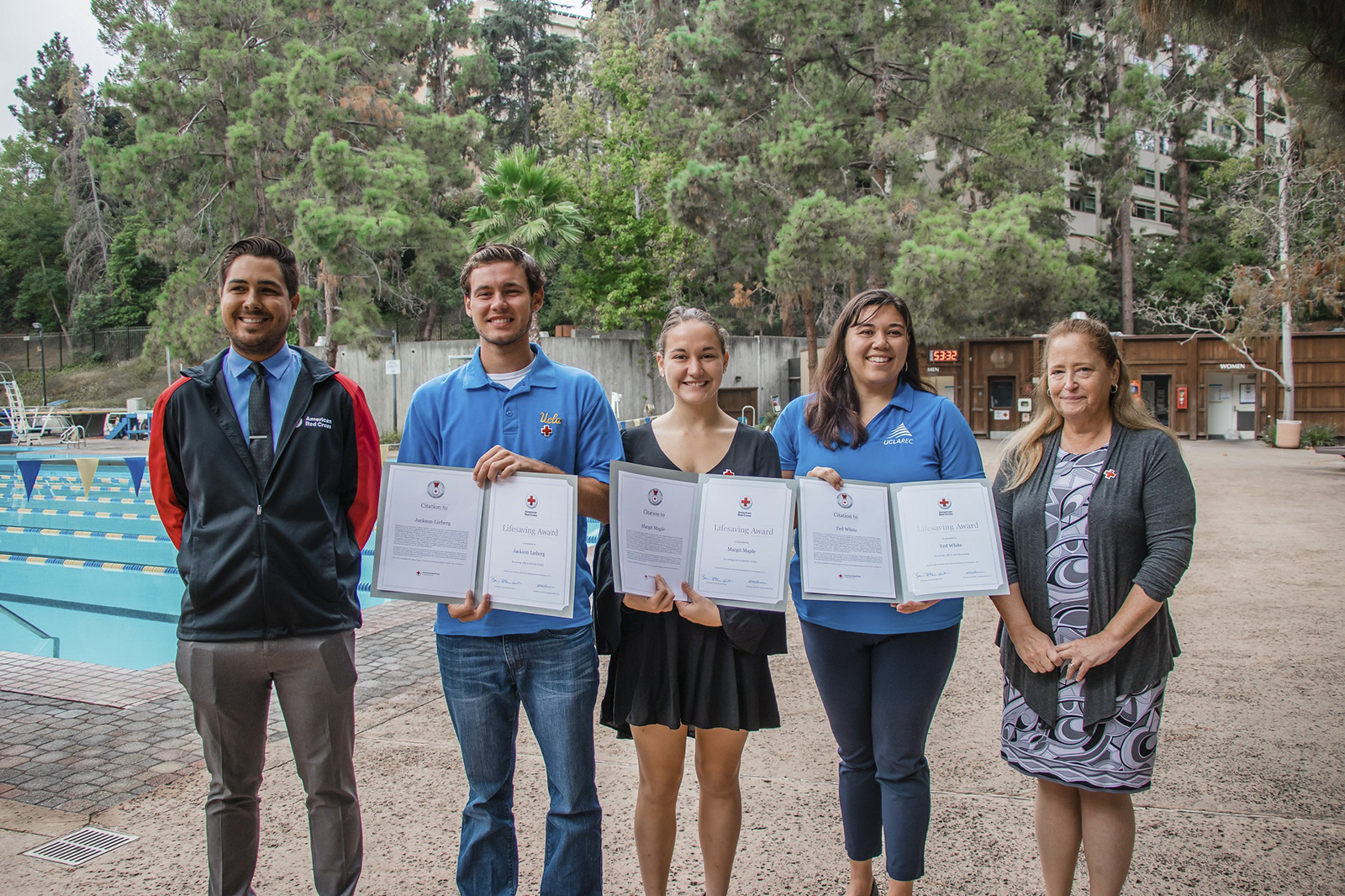 Three UCLA student lifeguards were awarded an American Red Cross Lifesaving Award for Professional Responders on Wednesday for their actions when a man collapsed in the Sunset Recreation locker rooms in January.

The lifeguards, fourth-year civil and environmental engineering student Margit Maple, rising fourth-year sociology student Ted White and second-year economics student Jackson Lieberg, were alerted during their morning shift Jan. 12, that a man had lost consciousness in the men’s locker room, White said. While Maple radioed the UCLA Recreation services front desk to call an emergency medical technician, White and Lieberg ran into the locker room to discover the man on the floor in the bathroom, after he had collapsed and hit his head on a bathroom stall door, White said.

White and Lieberg, assisted by a bystander who identified himself as a doctor, checked his pulse and breathing, White said. As the man began to regain consciousness, Maple entered the locker room to tell them the EMTs were 1.5 minutes away, White said. White, a third-year at the time, left to bring the EMTs into the locker room.

When the man woke, he told them he thought he was having an allergic reaction to the chlorine in the pool, White said.

The EMTs and Lieberg then performed a manual in-line stabilization on the man, which immobilizes the head and neck of a patient with a suspected spine or head injury to prevent any further damage.

As they worked, White cleared away the benches to create a path to the emergency exit for the incoming ambulance. He then left to ask the swim coach for the man’s name and information to provide for the EMTs, he said.

“You kind of go on autopilot,” White said. “I’ve never had a rescue before or anything like that. I mean, it’s obviously kind of nerve-wracking. But there was never any moment of hesitation on what to do.”

The American Red Cross Lifesaving Award for Professional Responders is given to nominated individuals who use lifesaving skills in an emergency situation during the course of their work. It is one of the highest awards given by the Red Cross, said Julie Thompson, the executive regional manager of the American Red Cross, Santa Monica Bay chapter.

“Even people who get trained sometimes can’t react quickly enough,” Thompson said. “But having that training gave them the confidence that they knew what to do. … It doesn’t happen every day that you get the opportunity to save a life.”

“All three of them, (White, Maple and Lieberg), they’re very calm under pressure and clear-headed,” Goodwell said. “They communicate well with each other. They’re well-trained and they take their job seriously. And I see that during training.”

“These individuals exemplify our mission, which is to prevent and alleviate human suffering in the face of emergencies,” Thompson said.