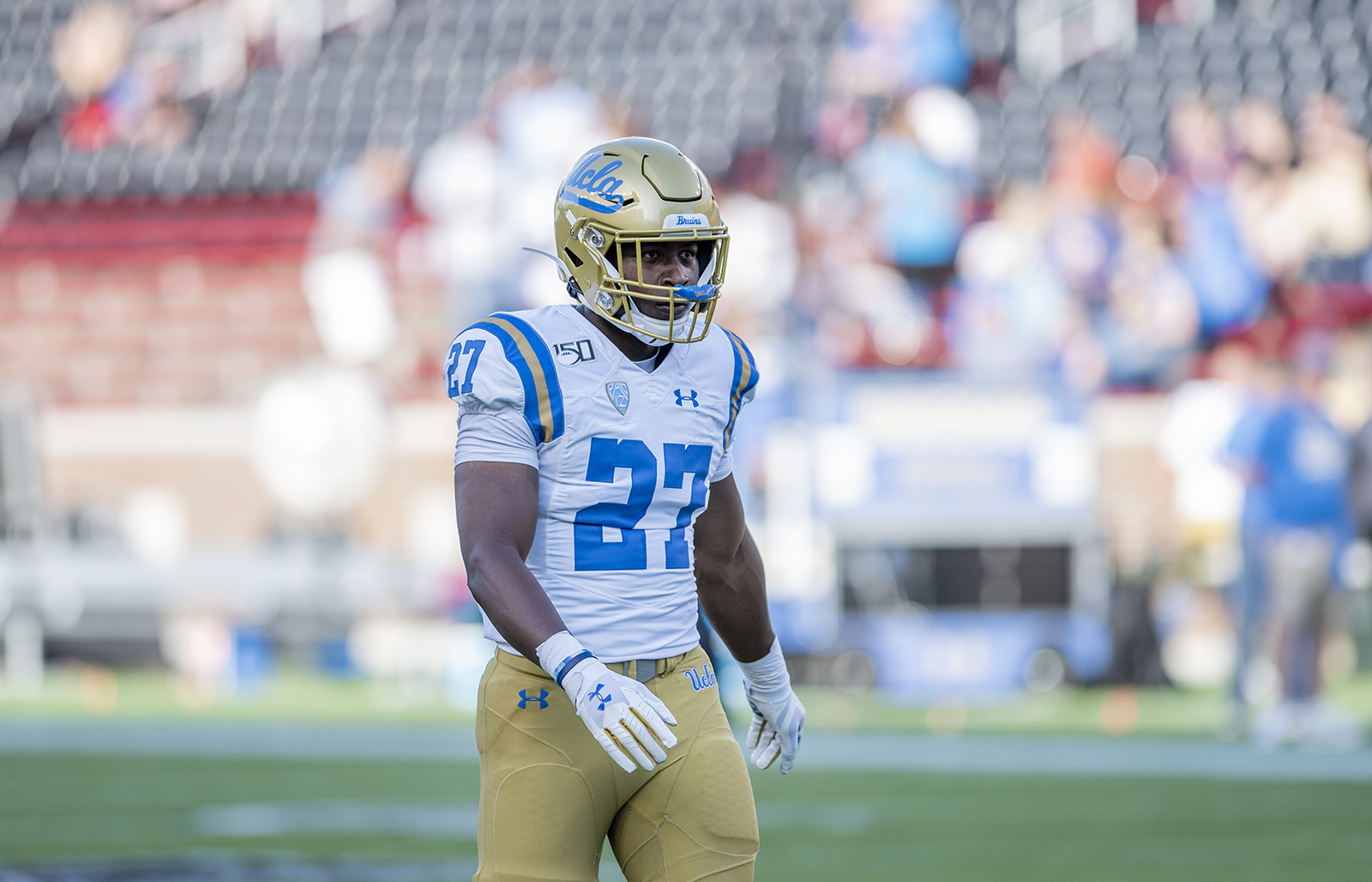 Redshirt senior running back Joshua Kelley rushed for seven yards on five attempts against Oklahoma in 2018. Kelley missed the next game but averaged 145.1 yards per game over the next eight games. (Axel Lopez/Daily Bruin senior staff)

In all honesty, UCLA football has not been that bad.

I know, that’s basically heresy at this point – everyone is off the Chip Kelly bandwagon and fans are begging him to bench sophomore quarterback Dorian Thompson-Robinson. The Bruins are breaking historic school records for the second straight year, but not the ones you really want to break.

Let’s not kid ourselves though, there have been bright spots.

To make myself 110% clear, those bright spots don’t come anywhere close to No. 5 Oklahoma’s. If the Bruins are a flickering flashlight, the Sooners are basically the sun. Quarterback Jalen Hurts is a Heisman contender and it looks like he’ll carry Oklahoma to its third-straight College Football Playoff.

UCLA’s defense has held up moderately well through two weeks, allowing just 23.5 points per game after letting up 34.1 per game last year. Oklahoma is scoring 59.5 per game so far in 2019, but it’s safe to say UCLA has a better defense than Houston and South Dakota.

Thompson-Robinson and the Bruin offense have been completely stagnant this year, but Cincinnati and San Diego State were top defenses in 2018. Oklahoma ranked outside the top 100 in scoring defense last year, so I think UCLA will finally break the 14-point threshold this week.

I’m not picking a UCLA win – not even close actually. But could they cover the 21.5-point spread?

I’m done predicting that the Bruins will win games.

After a pair of underwhelming losses to Cincinnati and San Diego State to open the season, there is no reason to believe UCLA has any chance at knocking off Oklahoma this weekend at the Rose Bowl.

Honestly, I’m not sure the Bruins will be getting their first win anytime soon, considering that they’ll be headed out on the road for two weeks following Saturday’s matchup with the Sooners.

Oklahoma’s quarterback – former Alabama starter Jalen Hurts – is essentially everything UCLA hoped Thompson-Robinson would be. Hurts is an outstanding game-manager and a legitimate dual-threat with a championship pedigree. In two games with Oklahoma, he has completed 82.9 percent of his passes for 591 yards and six touchdowns.

And while the Sooners’ defense isn’t what it once was, it’s still better than a Bruins’ offense, which has only managed to score 28 points in two games.

There really just isn’t anything optimistic I can say about this one. Buckle up.

After last week’s 23-14 loss to San Diego State, UCLA needs some help from both sides of the ball. But don’t expect it to see better days against Oklahoma.

San Diego State scored 17 more points against UCLA than it did against Weber State. While some of that can be the Aztecs entering week one rusty, the 9.5 yards per passing attempt by SDSU quarterback Ryan Agnew spotlight a glaring Bruin weakness.

After giving far too much open space against Cincinnati’s wideouts in the season opener, the defensive backfield was equally as porous against San Diego State.

And facing Heisman-contender Jalen Hurts won’t help those defensive woes. Expect the quarterback to account for at least six or seven touchdowns against UCLA’s defense.

On the offensive side of the ball, standout redshirt senior running back Joshua Kelley returned against the Aztecs, and Thompson-Robinson didn’t look quite as lost as his disappointing performance against Cincinnati.

Still, there wasn’t exactly enough production to inspire confidence against San Diego State. Really there wasn’t even enough time – UCLA only possessed the football for 21 minutes and 44 seconds.

Oklahoma has faced a big-time offense already this season in Houston, and its defense will be prepared to stop Kelley as the Bruins’ main point of offense.

The Sooners are going to pressure Thompson-Robinson into making mistakes when the offense isn’t producing and Hurts will be unstoppable through the air. Expect Oklahoma to roll.

This year isn’t looking good for the Bruins – and I don’t think it’ll look any better after they host the Sooners.

Oklahoma, which put up 70 against South Dakota last week, is the highest-ranked opponent UCLA has faced this season.

I’m not saying the Bruins are the Coyotes – not even close. But at this point, UCLA fans are getting closer and closer to watching their team start 0-3 for the second straight year.

UCLA fell to San Diego State last week for the first time in program history. A week before that, it dropped its season opener to Cincinnati behind one of Thompson-Robinson’s worst career starts.

UCLA has shown few glimpses of developing a consistent offense and putting up a powerful defense that will be enough to stop Oklahoma – a team that leads the NCAA Division I Football Bowl Subdivision in offensive yards per game.

Realistically, I don’t think the Bruins have a chance, but I do think they will come to play against the Sooners.

Thompson-Robinson made his first career start in Norman, Oklahoma, against these same Sooners. I have no doubt he’ll come to play again this year, but the sophomore is no match for Oklahoma quarterback Jalen Hurts and leading receiver CeeDee Lamb.

The Bruins may look to make it a game, but they’re no match for a top-five team in the nation.