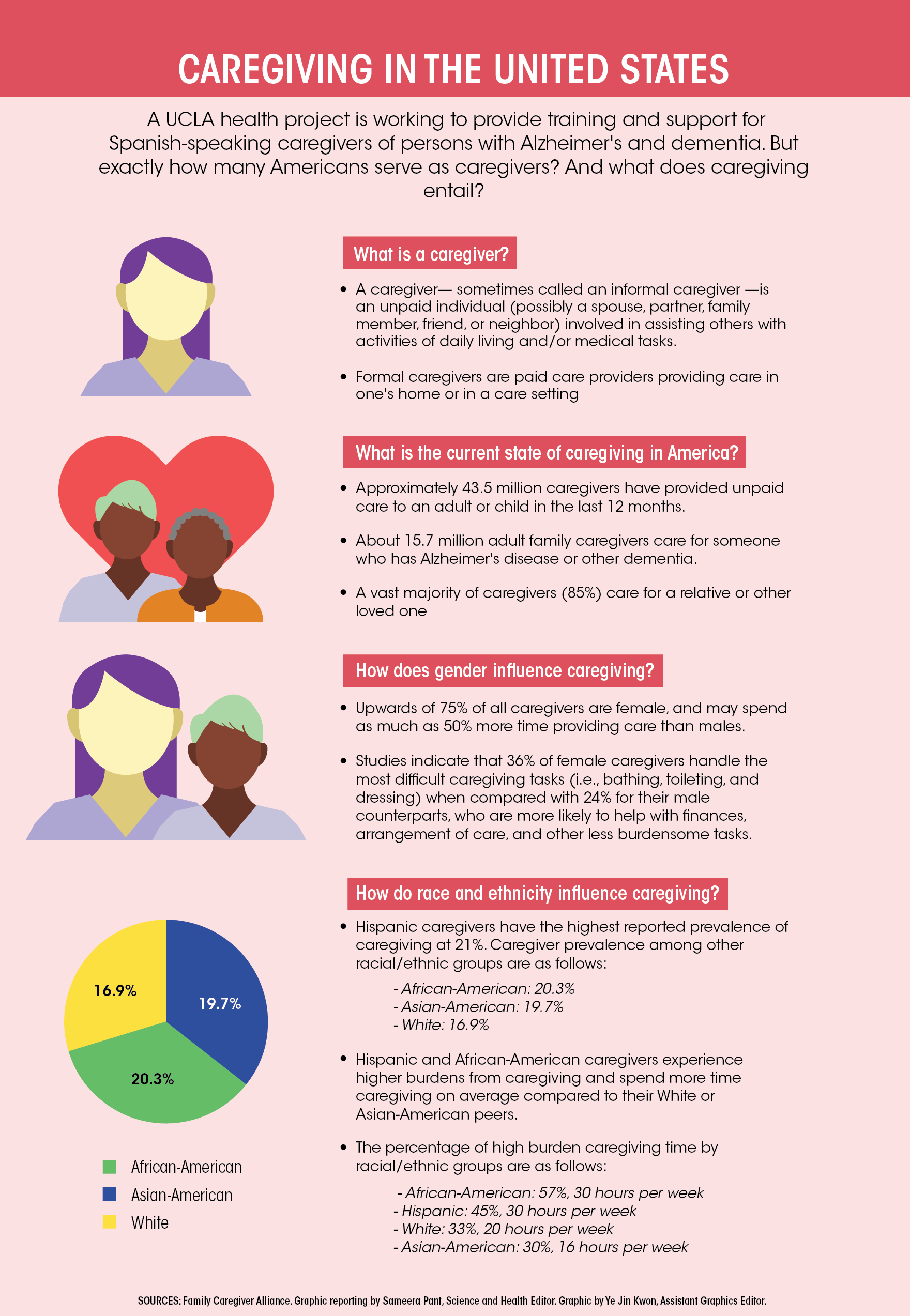 Improving Caregiving for Dementia has been an active component of UCLA’s Alzheimer’s and Dementia Care Program for around four years, spanning West Los Angeles, the San Fernando Valley and Van Nuys. Throughout the training, caregivers are given opportunities to learn about the basics of the conditions, handling certain patient behaviors and recreational practices.

However, the program had only existed for English-speaking caregivers until July, when ICareD completed its pilot boot camp in Spanish at the Bell Gardens Senior Center in Los Angeles, said Paul Camarena, ICareD project coordinator.

The need for a boot camp in Spanish stemmed from caregivers at UCLA Health. Not only had caregivers requested Spanish resources, many mentioned a lack of adequate training and general exposure to the basic information that exists in English, Camarena said.

Camarena added although English materials are not very expensive, they are far above what one can find in Spanish.

Hence, a large part of the pilot program involved translating previous ICareD content to be both culturally and linguistically tailored to the Hispanic population, said Zaldy Tan, the ADC program’s medical director.

This was done by hiring clinical assistant psychiatry and biobehavioral sciences professor Paola Suarez to serve as a cultural consultant.

“She helped review all of the existing English content and then helped sort of translate and make sure that it’s culturally tailored to the Spanish-speaking audience,” Camarena said.

Although the boot camp was first delivered in West Los Angeles, an area with a demographic with higher socioeconomic statuses and levels of education, Suarez said they worked toward using language that was universal in nature.

“One of the things that we wanted to make sure, for example, was that the language that was used in the presentation was language that was going to be understood by people of all levels of education,” Suarez said.

Additionally, Suarez said they added cultural nuance to program literature by including references to Hispanic culture, such as specific genres of music and games such as lotería.

The program also includes a section on self-care, another topic which had to be tailored to Hispanic culture. This is because Western culture is often more individualistic, placing more emphasis on assertiveness and independence, as compared to Hispanic culture, which is more collectivistic, underscoring dependability and attention to the needs of others, Suarez said.

“In America, we value going away and getting a massage over the weekend, … and there’s nothing wrong with that,” Suarez said. “But that is such a foreign concept to (the Hispanic population).”

Suarez said they wanted the workshop to encourage caregivers to engage in self-care in ways that seem more natural to them, comparing the process of caregiver self-care to putting on an emergency oxygen mask.

“You have to put the oxygen mask on first before you put it on somebody that needs it more than you,” she said.

Such practices are vital, as the Spanish iteration of the boot camp is open to the public and specifically targets family caregivers, Tan said. Family caregivers are unpaid, juggling the care of loved ones with daily tasks.

“We feel that these are folks who have the most need because they’re not professional, they might have their own children, but raising children and caring for someone older with dementia is an entirely different ball of wax,” Tan said. “We want to equip them with the knowledge and skills that they need in order to be effective in their role and also to decrease the risk of burnout.”

If a family caregiver gives up caregiving, it’s likely that the patient will end up in a nursing home and get institutionalized. This is what the boot camp tries to prevent from happening, Tan said.

Although Suarez and other faculty from the Semel Institute for Neuroscience and Human Behavior served as presenters at the first workshop, Tan said eventually they would wish for the training events to be self-sustainable.

“The hope is that by doing it in a place like Bell Gardens, is that eventually they will be able to do this on their own – i.e., it would not need our expertise to hold a program like this,” Tan said, “We know that we can only do so much of these and reach so many caregivers. We would love it if the local communities take this on, and do these (workshops) indefinitely.”

There is a strong need for the continuity of such a program because not only are there more Spanish speakers in LA than in the country of Uruguay, Alzheimer’s is disproportionately diagnosed in Latino patients than it is in Caucasian patients, Suarez said.

“We are a bilingual city,” Suarez said “There’s a lot of people who just don’t speak English and they need the information.”

Currently, the program plans to hold two more Spanish boot camps over the upcoming academic year. However, Camarena said the program is not set on any particular location for the future.

“We are looking into the South Bay, the San Fernando Valley, but ultimately it would come down to where we could reach the most caregivers and what would be easiest for them, as far as getting to the event,” Camarena said.

Camarena added they may potentially expand the program further to include boot camps in other languages as well, such as Mandarin.

Tan said students who wish to advocate for and get involved in the Hispanic community may benefit from getting involved in such programs.

“If (students) are interested in doing a program like this in a community in LA, specifically, then it would be terrific to hear from them,” he said.