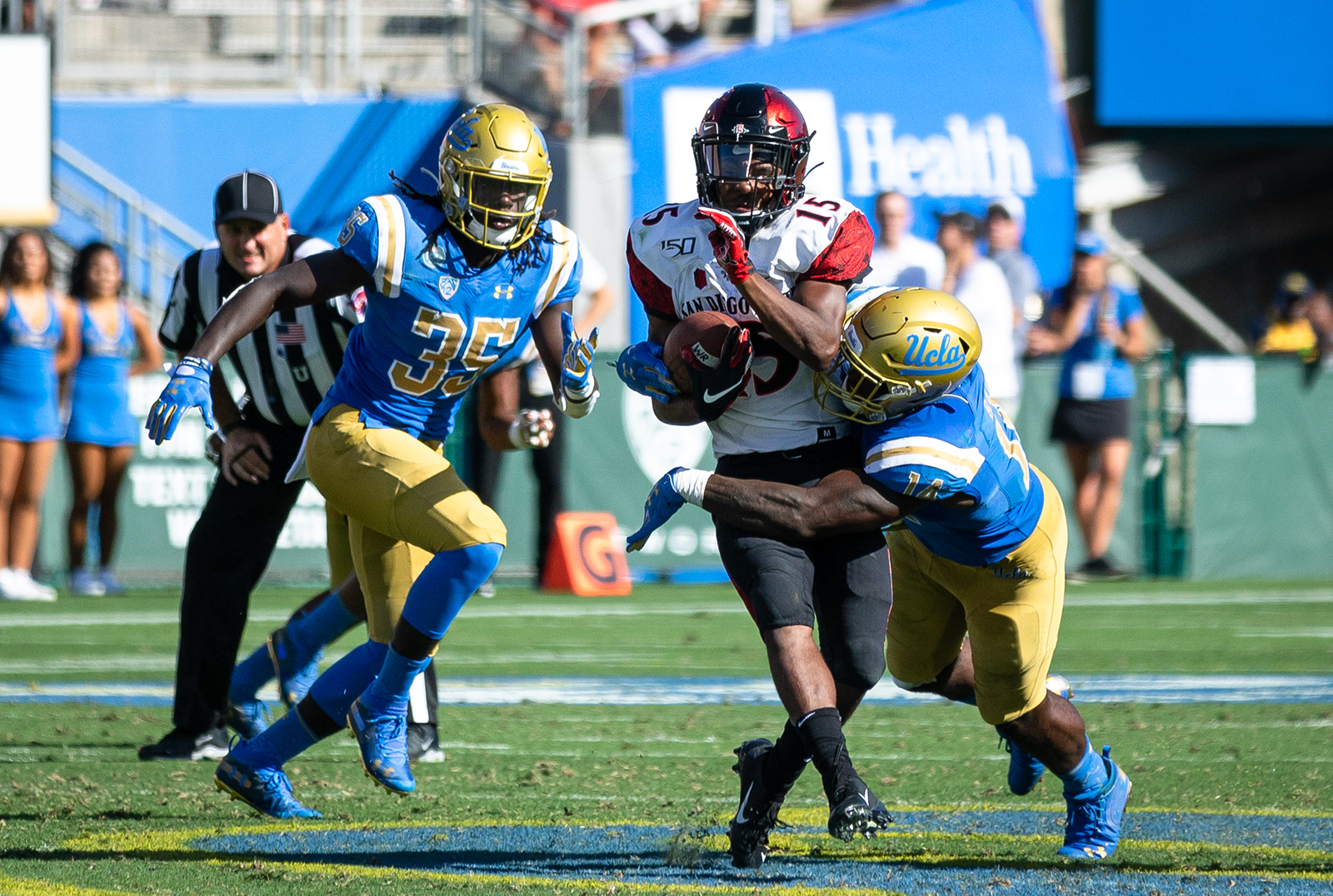 In 22 meetings dating back to 1922, the Bruins hadn’t lost a game to the Aztecs.

Nearly a century later, that no longer holds true.

UCLA football (0-2) fell 23-14 to San Diego State (2-0) Saturday afternoon in the Bruins’ second straight loss of the season. The Bruins have now dropped their home opener in back-to-back years for the first time since the 1989 and 1990 seasons.

Sophomore quarterback Dorian Thompson-Robinson – who completed his first five passes of the game and 10 of his 15 first-half attempts, was strip sacked by linebacker Kyahva Tezino just 1:24 into the second half. SDSU quarterback Ryan Agnew completed a 34-yard pass to wide receiver Kobe Smith on the second play of the ensuing drive to put the Aztecs up 17-7.

The Bruins had some answers, but not enough.

UCLA forced back-to-back incomplete passes on the following SDSU drive, but the Bruins surrendered a field goal to put the Aztecs back up by six heading into the final period.

Redshirt sophomore cornerback Elijah Gates – who was called for three penalties in the game – allowed a back shoulder fade that helped the Aztecs get in range for their third field goal of the day, bringing their lead to nine. The Bruins were without junior cornerback Darney Holmes for a second straight game due to injury.

UCLA got on the board first with a five-yard carry from redshirt senior Joshua Kelley – who sat out against Cincinnati in week one. Thompson-Robinson completed passes to junior wide receiver Jaylen Erwin for 18 yards and Dulcich for 13 yards to set up Kelley for the touchdown.

After giving up a touchdown and a field goal, the Bruins had the opportunity to tie the game with a field goal midway through the second quarter, but senior kicker JJ Molson’s 45-yard attempt bounced off the left upright. UCLA trailed 10-7 at the break.

Despite the Bruins’ run defense allowing just 1.7 yards per carry, Agnew – who completed just 16 of his 30 passes in his season debut against Weber State – finished 23-of-31 for 293 yards on the game, including a stretch in which he completed six consecutive passes in the first half. Agnew recorded career-highs in both passing yards and completions.

“I would say his success came on poor defensive alignment. So it was more on us,” said junior safety Quentin Lake. “Obviously in the back end, we didn’t do so well, so it showed that he could play.”

“I see what (the players) see,” Kelly said. “We made too many mistakes to win a football game today and we certainly understand that. It’s on us to correct them. It’s not on us to tell them what to say or what to think or how to act. It’s on us to make the corrections and play better as a football team.”