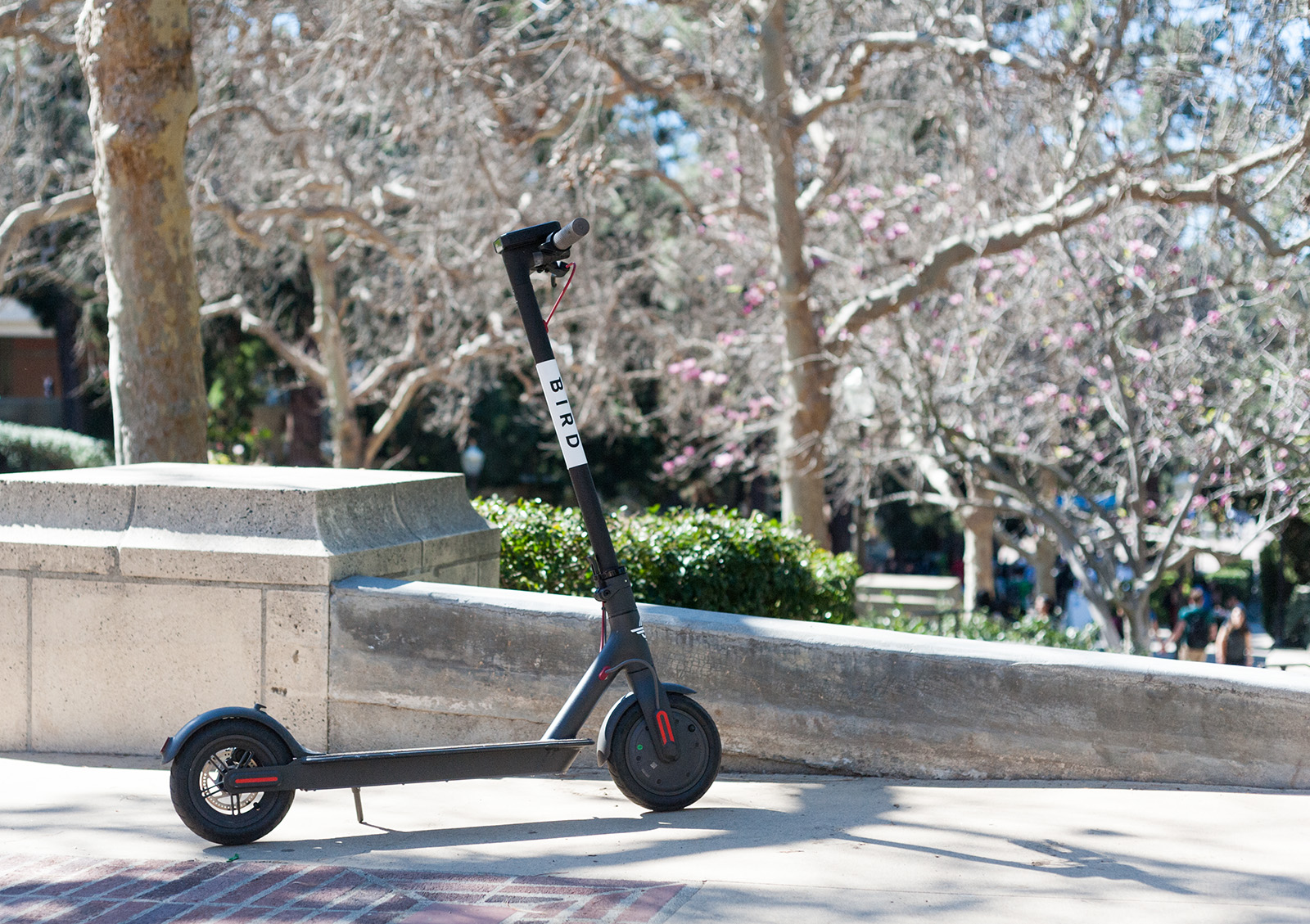 UCLA’s agreement with three e-scooter companies is a blatant desire to financially capitalize on e-scooters’ abundant presence within the campus, not prioritize the safety of its students. (Daily Bruin file photo)

A young couple held onto one another, like Rose and Jack in the iconic scene from “Titanic.”

But this isn’t the movies, and they weren’t on a boat.

This is modern love, and they were on a Bird – the electric scooter, that is.

Bird scooters originally swarmed UCLA’s campus in January 2018. It did not take long for copycat companies, such as Lyft and Lime, to begin squeezing their way into the campus e-scooter community. With more scooters came more uncertainty about what to do with them – until now.

On August 19, UCLA Newsroom announced UCLA reached a preliminary agreement with Bird, Lyft and Wheels to allow the companies to legally operate, park and promote themselves on campus in exchange for student discounts and designated parking spots. As part of this deal, these companies will pay fees to the university to keep their scooters on campus, said Alison Hewitt, a UCLA spokesperson.

Once again, UCLA is laughing their way to the bank.

The only significant change this deal brings is more e-scooters – and more parking for them. The University claims to be partnering with private companies for students’ safety, when student well-being is the least of their priorities. Instead, this deal lines the university’s pockets by bringing more scooters onto campus without proper infrastructure to accommodate them or ensure their safe usage.

And safety has long been the university’s talking point on e-scooters. Bird and UCLA have boundaries set for riders, but these rules are often ignored. All the scooters operate through a mobile application and require a rider to have a valid driver’s license, be 18 years or older, follow all traffic rules and not allow additional riders to join them.

The helmetless Titanic couple coasting down Charles E. Young Dr. must have skimmed past the terms of agreement.

UCPD officer Kevin Dodd previously told the Daily Bruin that he was giving student riders citations not because the University wants students to stop riding Bird, but because they need to learn to be safe while doing so.

But with new attention being given to identifying and impounding scooters from non-partner companies, unlawful riders may go unnoticed.

In a statement from UCLA Transportation, Hewitt said companies were prohibited from dropping e-scooters on campus prior to the agreement and their presence was due to students and employees riding them onto campus.

“Fees paid to UCLA by these companies will be used to improve campus roadways, making it safer for all active transportation users,” Hewitt said.

And while bringing more scooters to campus doesn’t sound like a necessarily safe alternative, this deal is surely fruitful for profits.

Since e-scooters flocked to campus over a year ago, UCLA has witnessed an impact on their profit margins. Between a declining Bruin Bike share program and an aborted attempt to enter the e-scooter market, it’s no wonder the university was looking to strike a deal with these companies.

That’s not to say safety isn’t out of the question – Bird scooters no longer operate past midnight and require riders to complete safety training through the app before riding.

“As shared e-scooters become an essential transportation mode in this shift away from cars, it is critically important that micro-mobility operators, cities and organizations shine a data-driven light on how to improve the safety of all road users,” said Mackenzie Long on behalf of a spokesperson for Bird.

But as it stands, safety clearly isn’t UCLA’s top priority. Despite the fact that Bird just settled a $300,000 lawsuit with customers who were injured while riding their scooters, the university has moved forward with a partnership.

Even the steps taken so far haven’t worked as well as planned.

Wren Crapser, a third-year political science student, said restrictions and no-ride zones were established months ago and have made riding an e-scooter unenjoyable and sometimes unsafe.

According to Crapser, the app struggles to tell the difference between streets and sidewalks so they had a Lyft scooter shut off in the middle of De Neve Drive due to a nearby no ride zone, causing Crapser to nearly get into an accident with oncoming traffic.

“It’s unfortunate that UCLA has created these potentially dangerous scenarios that affect riders like me,” Crapser said. “All the agreement surmounts to is putting the profits over the rider and sugarcoating it with promos.”

While UCLA’s e-scooter deal is currently provisional and could fall through or change based on pilot program’s results, students are rightfully concerned that their tuition hike is now being used to build e-scooter parking that may not even be needed or used in the years to come.

Sure, the fees from the partnership are being allocated to improving campus transportation. But bigger bike lanes and e-scooter parking help cars and pedestrians more than riders, with 92% of people injured in e-scooter accidents being riders. While UCLA attempts to use this deal to fund other forms of transportation, these free range Birds will take over campus with little pre-existing infrastructure designed for e-scooter safety.

E-scooters are here for the long haul, and safety should be of utmost concern. But without a system in place to ensure safety is addressed, UCLA’s deal doesn’t have a leg – or a scooter – to stand on.

As of now, it seems the university is happy raking in profits and wheeling Birds onto campus.

The romance of the electric scooter is sinking, much like Jack and Rose’s fleeting time together. 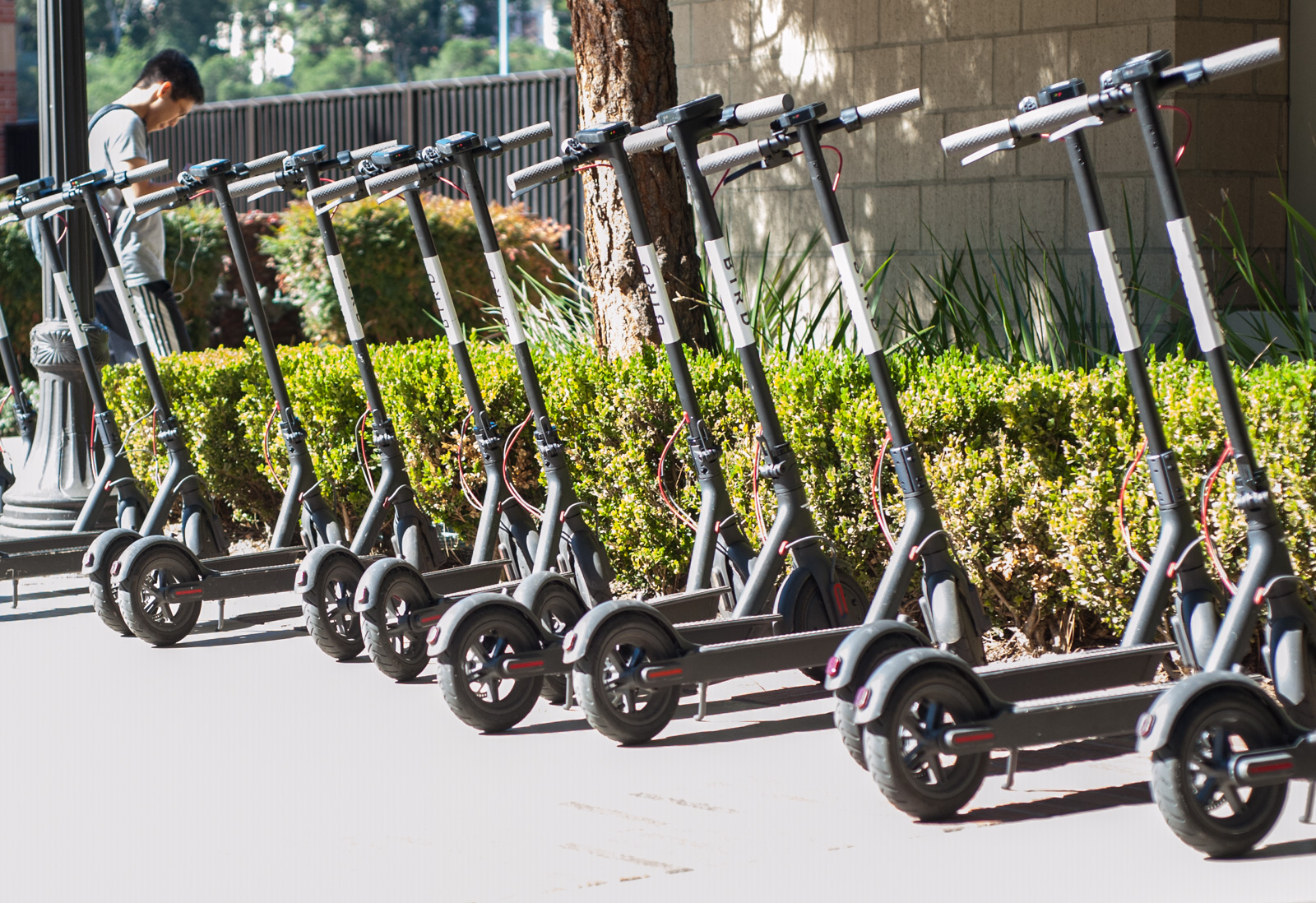