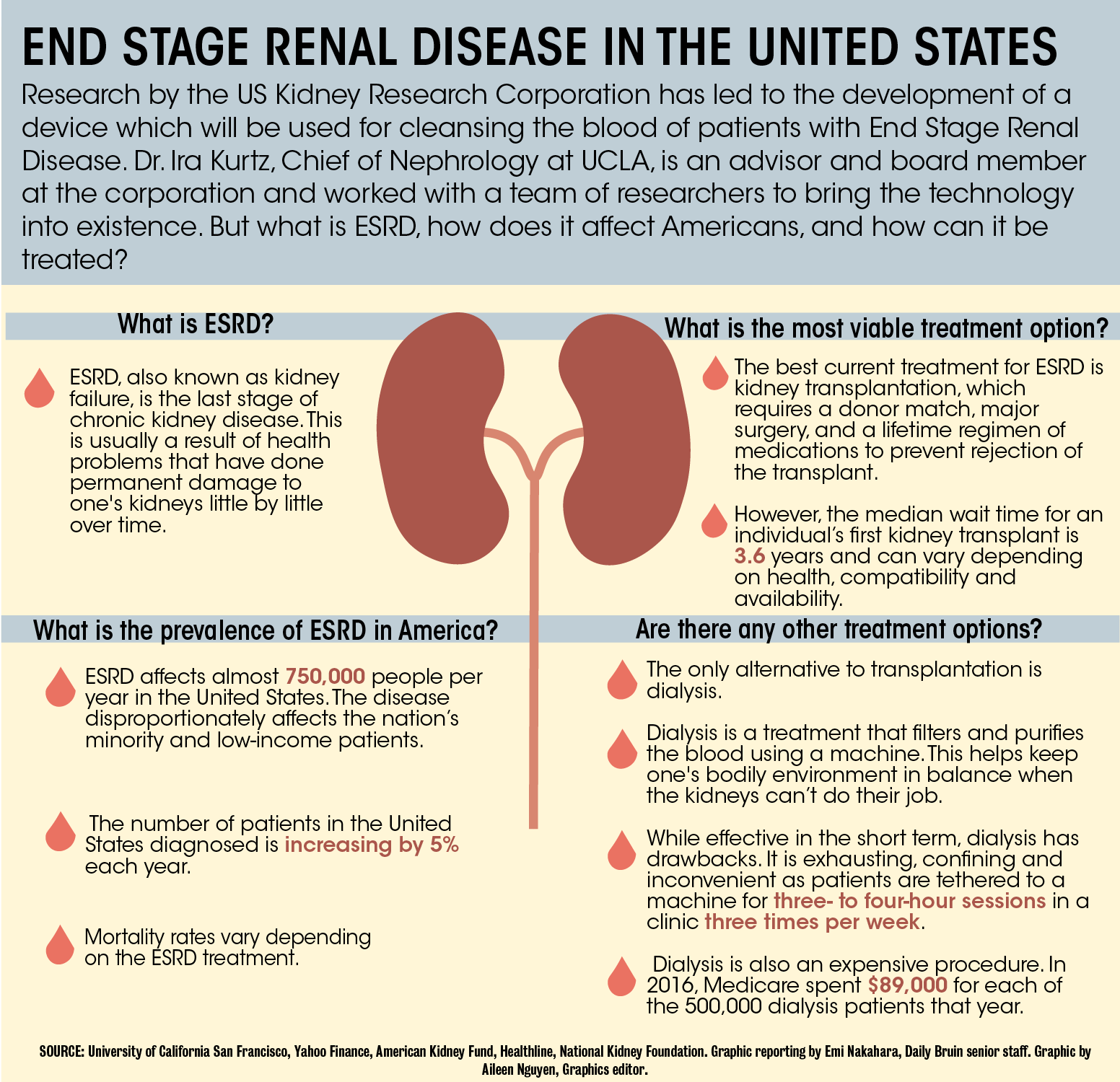 An artificial implantable kidney may pave the way for a new treatment for millions of people with chronic kidney disease.

A four-year research collaboration between UCLA and the University of Arkansas created a prototype artificial kidney able to purify human blood and remove its waste products without the need for dialysate, a solution that is typically used for kidney dialysis. Researchers plan to test the technology with a living pig as its first animal model Aug. 29.

The research is funded by the US Kidney Research Corporation, a private research company focused on waterless kidney replacement technology.

According to the National Kidney Foundation, 37 million people in the U.S. have chronic kidney disease, which is the ninth leading cause of death in the country. It can result in kidney failure, which requires the patient to undergo kidney dialysis – an artificial method of cleaning the blood of toxins and waste – or a kidney transplant to stay alive. Hemodialysis costs Americans $42 billion per year, of which $34 billion is paid via medicare, according to the Kidney Project at UC San Francisco.

A kidney transplant can replace dialysis as treatment, but there are more than 100,000 people on the waiting list nationwide, said Ira Kurtz, a UCLA professor of medicine who spearheaded the project.

“There’s not enough kidneys to go around,” he said. “Someone who’s waiting for a cadaveric kidney (i.e., a kidney from a deceased person) would have to wait for 10 years in Los Angeles.”

Kurtz, who is also the Kidney Research Corporation’s chief science/medical advisor, said the ultimate goal would be to create an artificial implantable kidney, which does not use water or dialysate fluid. This would not only save on resources and money, but also free up the patients’ time as well, he added.

Currently, the device is roughly the size of a suitcase, but the next goal is to shrink it smaller so it can be easily carried in a backpack, Kurtz said. This way, the patient can carry the device and continuously have their blood be cleaned without needing to go to a clinic or exchange dialysate fluid.

“There are other people who are trying to create a wearable artificial kidney, but those devices still use dialysate solution, so the person has to carry the solution, which we feel is crazy,” he said.

For hemodialysis, patients must be at a clinic or home for three and a half-hour long dialysis sessions three times a week. For peritoneal dialysis, patients undergo the session overnight daily. Hemodialysis requires very large amounts of water and dialysate in order to clean and get rid of toxins and waste from the blood, Kurtz said

“We couldn’t have that infrastructure in an ideal implantable kidney. I think there’s enough water used in hemodialysis per year in the United States to feed all the livestock in the states (for approximately a day and a half),” Kurtz said. “It’s a huge amount of water.”

The new prototype, however, uses filtration and electron deionization instead of dialysate fluid to clean the blood and create urine, Kurtz said. First, an ultrafiltration module takes in blood from the body, while preventing cells and important proteins from the blood from getting into the rest of the device.

Next, electron deionization units, or EDI, transport important ions, such as potassium and sodium, in and out of the blood in order to maintain a crucial balance in their concentration in the body. For example, too much potassium in the blood can lead to a heart attack, Kurtz said.

The device also uses a nanofilter to remove urea, a metabolic waste product, from the blood, and another to prevent important sugars from leaking from the blood into the urine, which can be fatal for the patient, he added.

“Urine has a certain chemistry from cells in the kidney, and we had to simulate them also,” Kurtz said.

Jamie Hestekin, a professor in chemical engineering at the University of Arkansas who led the development of the device, said a challenging part in building the EDI was the partial separation of the various important ions of the blood.

“You don’t want to remove everything,” Hestekin said. “Separating two things from each other completely is possible, but doing partial separation, removing things not needed and keeping those that are needed, is more complicated.”

Minhtri Nguyen, a UCLA professor of medicine specializing in kidney research, said an artificial implantable kidney device that doesn’t require dialysate would be a major advance in the field.

“In theory, it sounds good. But only by testing with an animal model and later in humans we can know for sure it’s effective,” he said. “If it is, it could change the way we practice nephrology.”

However, Nguyen said he was unsure of one aspect of the technology. Although the nanofiltration modules are responsible for removing excess urea from the blood, filtration alone cannot decrease the overall blood urea concentration, he said. Urea cannot be removed by the EDI units because it is not a charged molecule, and also cannot be easily removed by a selective membrane.

“Urea is tricky to remove, but it’s a very major solute,” he said. “If they can’t lower the concentration, that’s a big problem, and they might need to go back to the drawing board.”

He said he is cautiously optimistic for upcoming tests of the device with a live pig.

“It’s been performing really well, with tremendous progress in four years, despite its extremely challenging application,” Hestekin said. “We’re really hoping that the trial can show that with some more incremental progress we can actually get something that works long term.”