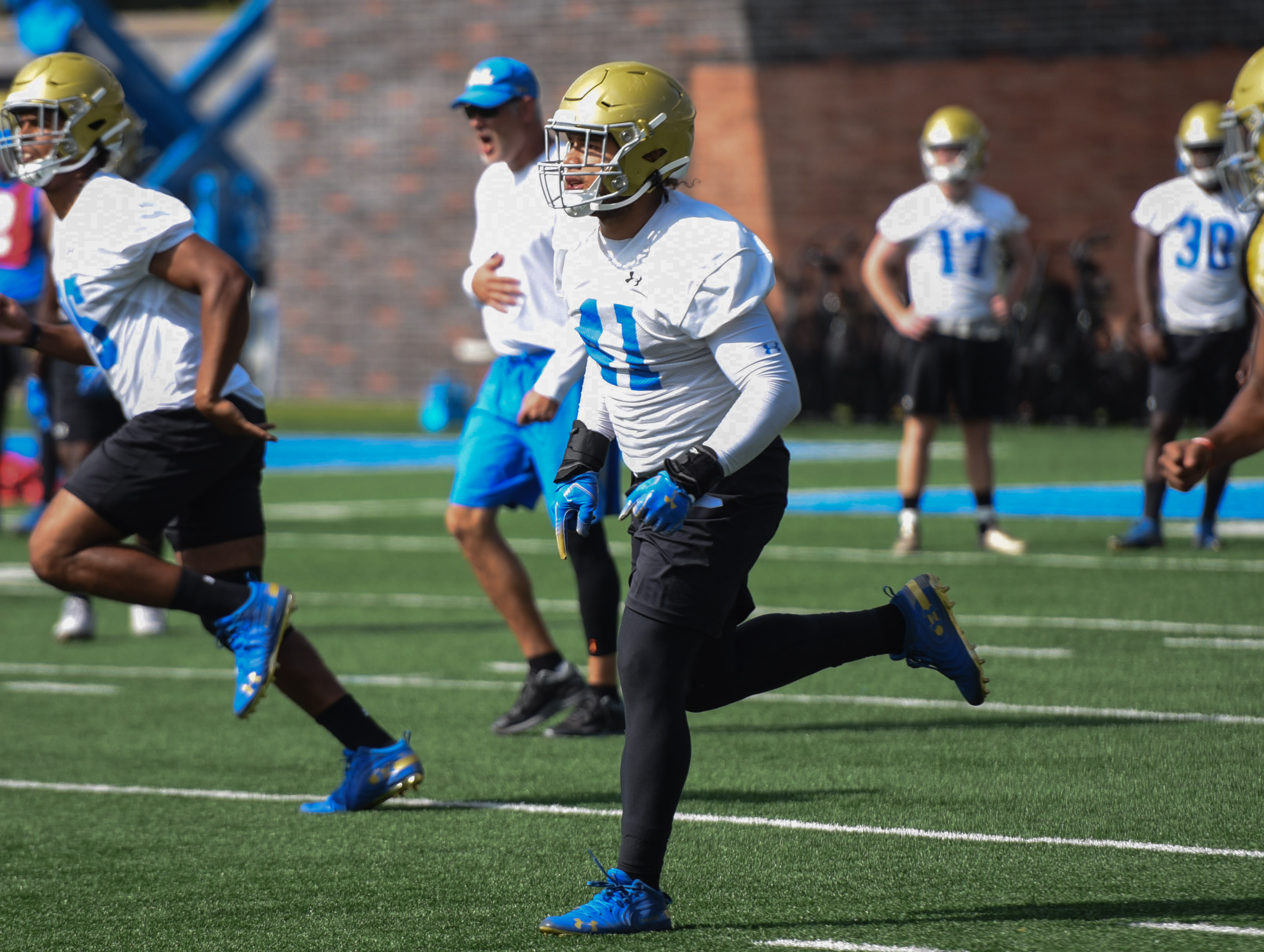 UCLA football has renewed its focus on creating a more player-led team dynamic during the 2019 fall camp. Players said this approach brought the team together and has prepared them for the season opener against Cincinnati in a week. (Jintak Han/Daily Bruin senior staff)

Redshirt sophomore linebacker Jayce Smalley laughed as he recounted the Bruins’ team trip to a bowling alley this week.

“There were a lot of gutter balls, some people can’t really bowl,” Smalley said. “I bowled a 120, not amazing, but not terrible. … It was the whole team, the coaches were there too, so it was a good time.”

The excursion was just one example of UCLA football’s increased emphasis on creating a player-led team, something coach Chip Kelly strived to implement when he was hired before the 2018 season. Smalley said the approach has led to a more cohesive and prepared team as the Bruins prepare for the start of the season.

“We’re all coming together, it created a way closer team,” Smalley said. “We’re all gelling together, everyone’s playing fast, everyone enjoys being around one another, and I think that’s one of the most important things – everyone loves each other.”

After a disappointing season in which the Bruins went 3-9, Smalley said the team has come together to learn from last year’s campaign and take responsibility for one another both on and off the field.

Linebacker Jason Harris, who transferred from Illinois State as a graduate student for his final year of eligibility, credited the player-leadership culture of the team as one of the foremost reasons he decided to become a Bruin.

“I could just really tell that they wanted it to be a player-run team, and the players are embracing that, and that’s something I’ve seen that’s needed in programs,” Harris said. “You need to play as you care about the program. … That was the biggest thing, just analyzing the guys and their attitudes.”

In addition to helping the team grow closer off the field, Harris said having such a strong culture around player leadership has also benefited the team in terms of on-field work. As a new addition to the team, Harris said the leadership from more experienced players helped him, as well as other transfers and freshmen, to acclimate to the team’s system faster.

“It’s a new system, so it’s been a lot to learn, but it’s been great having guys like Jayce Smalley and (redshirt senior linebacker Josh Woods) help me pick it up,” Harris said. “It’s been awesome, to see … just guys getting the plays down as compared to day one, you see us messing up simple stuff, and now we can run more complex stuff and people are getting it down.”

With UCLA’s first game of the season against Cincinnati on August 29, Smalley said the team’s focus on camaraderie has paid off, and it’s ready for the season.

“We’ve all worked tremendously hard in the offseason to work on our pass rush and all of our skills as a group,” Smalley said. “So I feel like as we push together as a unit, we’re gonna be stronger, better faster, and hopefully get home.”