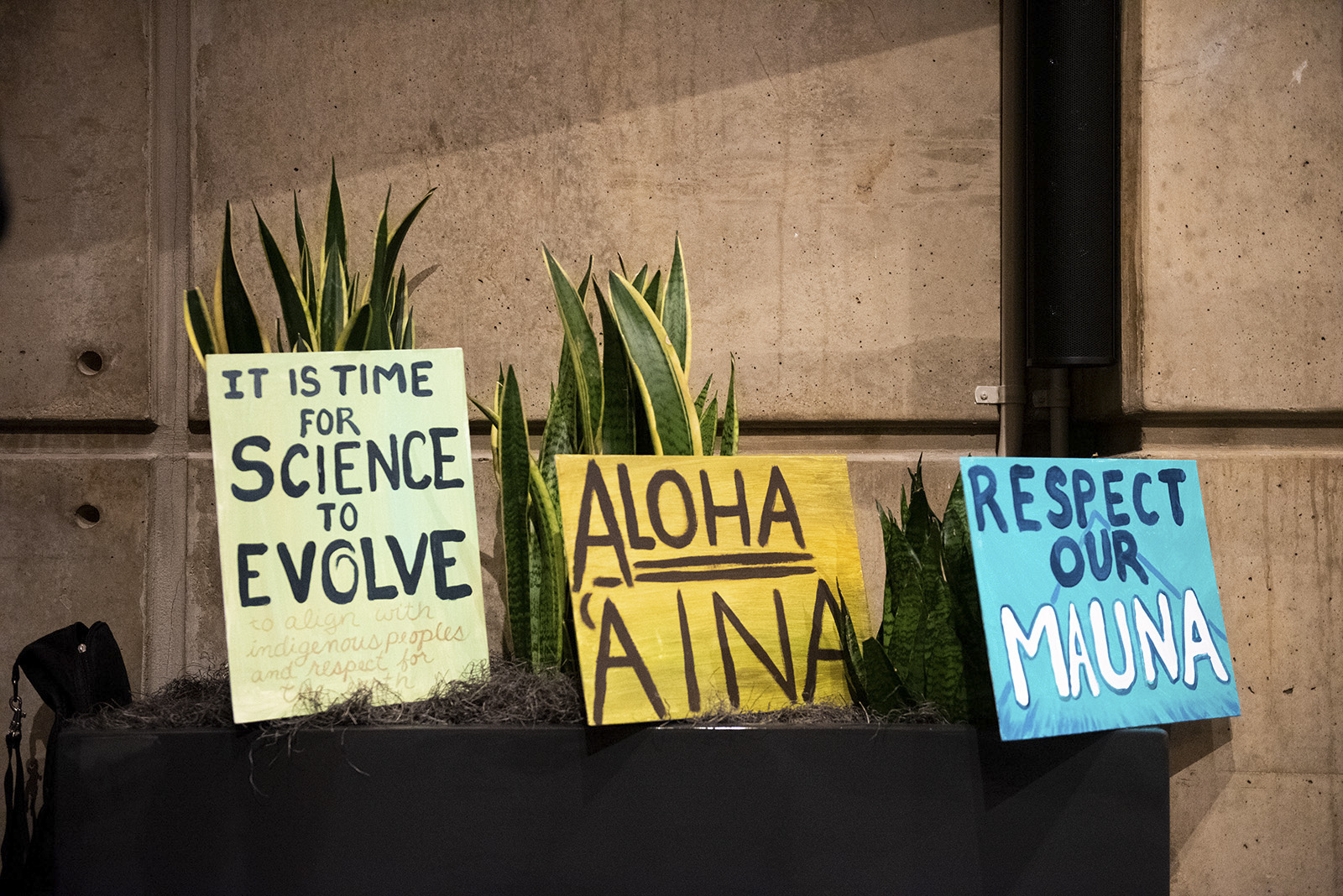 The UCLA Pacific Islands’ Student Association held a town hall in February and invited local Hawaiian leaders to discuss their opinions on the Thirty Meter Telescope. The student organization held a public protest and received almost 5,000 signatures on a petition to demonstrate opposition to the TMT to the UC Board of Regents, according to PISA member Uriah Blackwell. (Tanmay Shankar/Assistant Photo editor)

UCLA students and faculty remain divided over the University of California’s involvement in the development of a massive telescope in Hawaii, as construction continues to be delayed by protesters for a sixth week.

The Thirty Meter Telescope would allow researchers to look into space at greater distances and higher resolution than before. However, it is set to be built on the summit of Mauna Kea, a sacred site in Native Hawaiian culture.

Earlier protests occurred after ground was broken for the TMT in 2014 and 2015. However, the Hawaii Supreme Court ruled the construction of the TMT was valid in October, and construction was scheduled to begin July 15, leading activists to begin protesting again July 13.

Randall Akee, an assistant professor of public policy and American Indian studies who traveled to Mauna Kea earlier this month, said those advocating against TMT are currently at the access road to the summit of Mauna Kea, denying construction equipment access to the mountain.

He said that, during the first week of their activism in July, several native Hawaiian elders were arrested, which had some effect in changing public sentiment about the construction of the TMT. No further arrests have been made since then.

He said he thinks the issue with the TMT is not about legal ownership of land, but about the ethical and cultural issues of continued desecration, destruction and environmental degradation of the sacred mountain.

Uriah Blackwell, a member of UCLA’s Pacific Islands’ Student Association and a rising fourth-year African American studies and environmental science student, said he thinks the lack of cooperation from the government has created a tense situation.

“(The) native people of Hawaii … have not really had a fair representation in their say of whether or not the telescope should be put there or not, considering that Mauna Kea is the most sacred place to all Native Hawaiians,” Blackwell said. “It’s considered the first place of aloha, the home of … the god of all gods, … so it’s safe to say that Mauna Kea has probably the most art and culture than any other landmark in the entire island.”

Blackwell said that, during the 2018-2019 academic school year, UCLA PISA was involved with activism efforts to raise awareness about the construction of the TMT.

UCLA PISA held a town hall in February and invited local Hawaiian leaders to discuss their opinions on the telescope. Blackwell said the student organization received almost 5,000 signatures on a petition to demonstrate opposition to the TMT to the UC Board of Regents and held a public protest as well.

Blackwell said the reason he and UCLA PISA felt so strongly about protesting was because members felt the UC should not use student tuition to fund the telescope.

Andrea Ghez, a professor of physics and astronomy, has been involved with the TMT project for the past 18 years. She said the project has tried to pay attention to the issues associated with its location on Mauna Kea by consulting with the communities to determine which area would be less sensitive and by investing in the education of the local community.

She said the people involved with TMT have tried to be good partners and members of the community by talking to students, giving research opportunities to native Hawaiians and giving high school students opportunities to design plans for the telescopes.

Ghez added she thinks moving the construction of the telescope to another location would be a loss to the state and the people of Hawaii.

“Astronomy is one of the few high tech industries on (the) island,” Ghez said. “It offers jobs that are not in the hotel industry, not in the tourism industry. It employs many kinds of people. (Without it, there would be) an economic loss for Hawaii.”

Tomasso Treu, a professor of physics and astronomy who is also the chair of the Science Advisory Committee of the TMT, said Mauna Kea, the tallest mountain in Hawaii, was selected as the site of construction for the TMT because its height would allow for a sharper view.

“When you build a telescope that is supposed to be revolutionary and transformative, you also want to put it on a site that allows it to do the best science,” he said. “So scientifically, that is the reason we chose Mauna Kea.”

He added the construction of the TMT would be in a slightly less optimal area in an effort to be more conscious of the perspectives of the Hawaiian people.

Gordon Squires, the vice president of external relations and astronomer for the TMT, said the site that has been selected for the construction of the TMT will not interfere with the culture of the Hawaiian people.

Squires also said the team involved with the TMT has made an effort to include the community in its decisions. He said the communities have asked astronomers not just to build the observatory there, but to make sure that there will be employment opportunities for them in the astronomy and technology sectors.

He added the telescope in Mauna Kea has been a catalyst for addressing issues outside the field of astronomy.

“The historical injustices that native Hawaiians have suffered for the last hundred years are being addressed,” Squires said. “The use of native Hawaiian homelands and how those are managed is an issue in Hawaii and that has become part of the conversation in Hawaii, as well as issues of self-determination and sovereignty. So it’s not a simple question really about TMT on Mauna Kea anymore. There’s a lot of bigger issues that are being discussed now.”

Blackwell said he will continue to hold town halls and collaborate with other universities to raise awareness about the TMT.

“We’re really not looking to give out hate or point the blame,” Blackwell said. “I think the main thing that we … are trying to show is we love our island, we love our mountain, we love everything about who we are and we just wish you guys would respect that love for ourselves and just kind of leave what’s sacred to us sacred.”