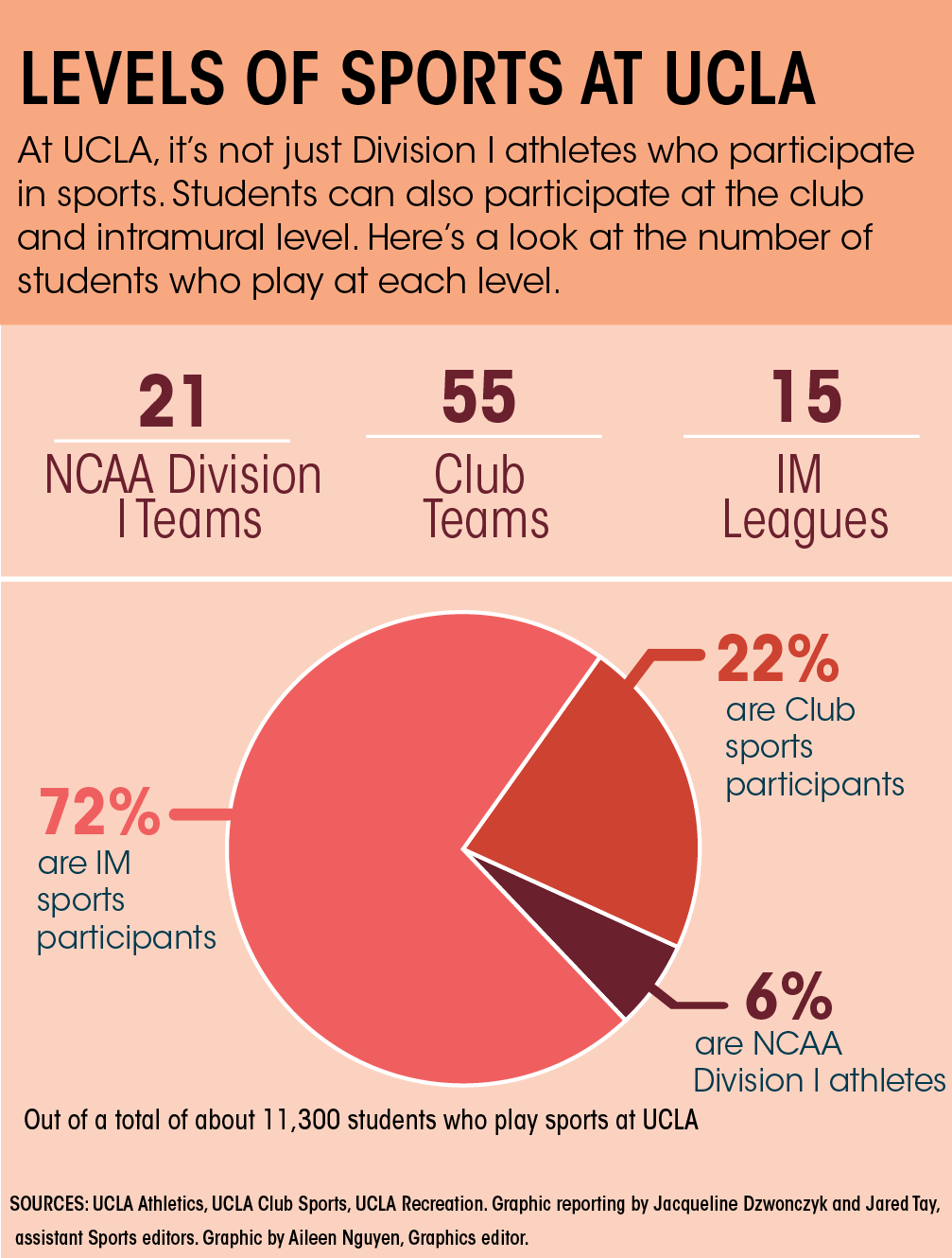 Take a step onto UCLA’s campus and it’s hard to miss the most salient identifying feature of a Bruin athlete – the blue Under Armour backpack.

UCLA Athletics is arguably one of the university’s defining features – with its brand, sponsorships and world-class athletes. However, the majority of students who play sports at UCLA aren’t five-star recruits trying to make it to the pros – and you can’t identify them by their backpacks either.

The UCLA Competitive Sports program is made up of both Club and Intramural Sports, both of which are open to any enrolled Bruin.

“Club Sports are more competitive, and they play other club sports teams from different schools,” said Megan Normansell, a coordinator for Competitive Sports. “Intramural Sports are recreational in nature and it’s Bruins playing against other Bruins.”

A variety of leagues and tournaments are offered each quarter within the IM Sports program which consists of 8,200 unique participants each year, according to the UCLA Club Sports website.

Rising second-year business economics student Markus Raad – who is employed as a referee for IM Sports – said most leagues are divided into divisions that allow students of all skill levels and campus affiliations to participate. Regardless of the level of play, almost all participants join IM looking for a fun way to exercise, Raad said.

“I haven’t seen people trying to relive their high school glory days,” Raad said. “The environment is relaxed, and almost 100% of people do it to just run around. At the end of the day, you’re competing for a T-shirt.”

Raad was a high school soccer player who joined an IM, coed soccer league upon his arrival to UCLA, and met many of his friends from that league.

“It is such an easy way to put yourself out there,” Raad said. “There’s a lot of decent athletes, but there’s also a lot of not-great athletes, and nobody really cares at the end of the day. Everyone is just looking to have fun.”

Club Sports – the highest level of athletic competition offered by UCLA Recreation – is composed of highly competitive teams that often travel to compete against other schools and often practice almost every day of the week.

“In winter, we had additional weight training on Monday and Wednesday, and as we got into spring (the racing season), we are on the water almost every day of the week,” Abrishamchian said.

There are 55 different teams under UCLA Club Sports, including some that are not Division I sports at the university – rugby, lacrosse and men’s rowing. For these sports, club is the highest level of competition offered.

Despite the competitiveness, UCLA Club Sports are open to all students who have a UCLA Recreation membership, and no student will be denied participation on a club team because of their lack of ability – but only some athletes will be selected to travel.

Abrishamchian – who had no prior rowing experience before attending UCLA – said his tryout tested his physical and mental perseverance, not his rowing ability.

“The first day, everyone from the info session came and there are not enough rowing machines for everyone who’s there,” Abrishamchian said. “The next day, half the guys were immediately gone and were re-evaluating their life choices. By the end, there are about 20 to 30 guys left and you know those are the people that will stay.”

However, the constant practice with the same individuals allowed Abrishamchian to find his circle of closest friends at UCLA.

“You have to be kind of crazy,” Abrishamchian said. “You have to like pain. You’re with the same 30 to 40 people every day, and you already know they will be your lifetime friends. There’s something about (pushing yourself to the limit) with the same guys; it’s like a big inside joke.”

John Wooden’s Pyramid of Success is not only a symbol of the university’s Division I sports. It appears on the logo of UCLA Recreation as well. Why?

Because the continuation UCLA’s tradition of athletic excellence falls on every student’s shoulders – not just those who wear sleek blue backpacks.