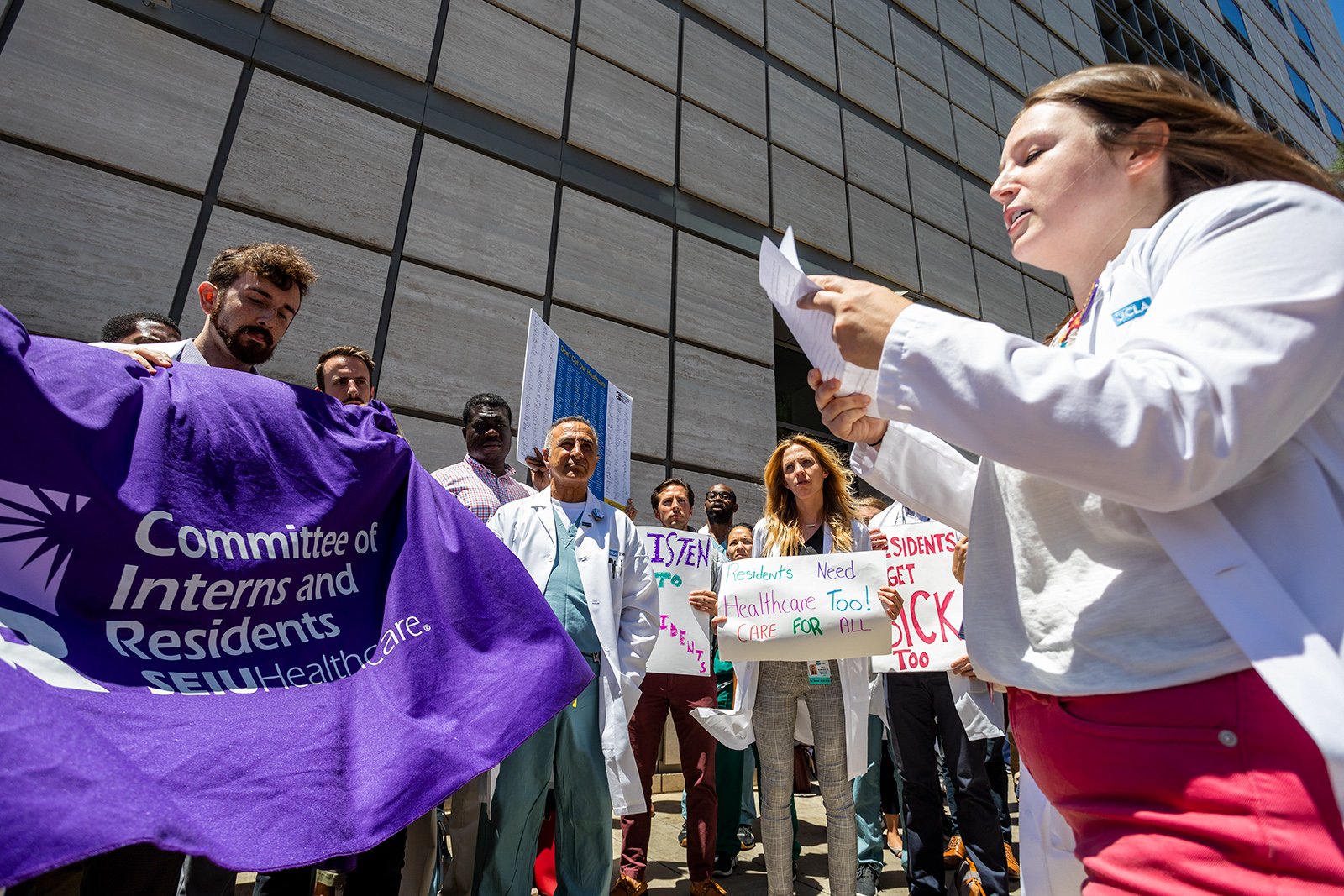 The Committee of Interns and Residents at UCLA held a walkout Wednesday to express its concern with proposed cuts to health benefits and union access. (Jintak Han/Daily Bruin senior staff)

After 10 months of bargaining with UCLA Health, the administration and residents reached a tentative agreement that includes wage and housing stipend increases, sustained health benefits until 2021 and unrestricted union access in the hospital, said Caleb Williams, a resident physician, in an email statement.

About 80 resident physicians and interns, as well as outside union members and supporters, gathered outside the Ronald Reagan UCLA Medical Center on Wednesday before the negotiations in a walkout to express their concerns with proposed cuts to health insurance benefits and restrictions to union access.

The walkout was organized by the Committee of Interns and Residents, the largest house staff union in the United States and a local of the Service Employees International Union, which represents physicians and fellows.

Caleb Wilson, a medical resident, said in an email statement over 70 residents attended the bargaining session the evening of Wednesday’s Unity Break, which he feels helped the committee’s effort to negotiate for a stronger contract.

“We are pleased with our contract and definitely believe Wednesday’s Unity Break provided a much needed push to come to a swift and strong conclusion,” Wilson wrote.

A UCLA Health spokesperson said in an email statement that the university is pleased to have reached a tentative contract agreement with the union, and the university is hopeful CIR members will ratify it in their upcoming vote.

Residents and fellows, like Emily Wood, a clinical fellow and postdoctoral researcher, gave testimonials Wednesday to the crowd about the effects the potential cuts could have on residents.

Wood said her family would not have been able to afford for her to complete her residency and fellowship training without the subsidized housing and health care benefits they received from UCLA.

However, she said the two primary issues that remained on the negotiating table, health care copays and union access, are about more than money.

“These are about mutual respect for each other, each other’s disposition,” Wood said. “It’s about practicing what we preach and taking care of each other.”

Another matter of debate between the residents and the UCLA negotiating team was the alleged lack of union access at the workplace as well as a lack of health care benefits.

Gregory Gabrellas, a psychiatry resident and member of the bargaining committee, said in an email statement that residents need access to union staff when they’re working.

“Our first priority is our patients, and everyone knows it is hard to get residents to make breaks for ourselves,” Gabrellas said. “We frequently work straight through our shifts, skipping meals. If we have a serious concern, over something even so clear-cut as safety or discrimination, we need to access our union staff where we are working. We definitely can’t chase someone down outside or around the hospital.”

Susie Shannon, the California political director for the Bernie Sanders campaign, also joined the crowd in support of the residents.

Wilson said the CIR thinks the most recent tentative contract is fair and better captures the value interns, residents and fellows contribute to UCLA Health.

“Most importantly, after almost a year of bargaining, we are excited to enforce our new contract so that we can continue focusing on becoming better doctors and caring for patients,” Wilson said.