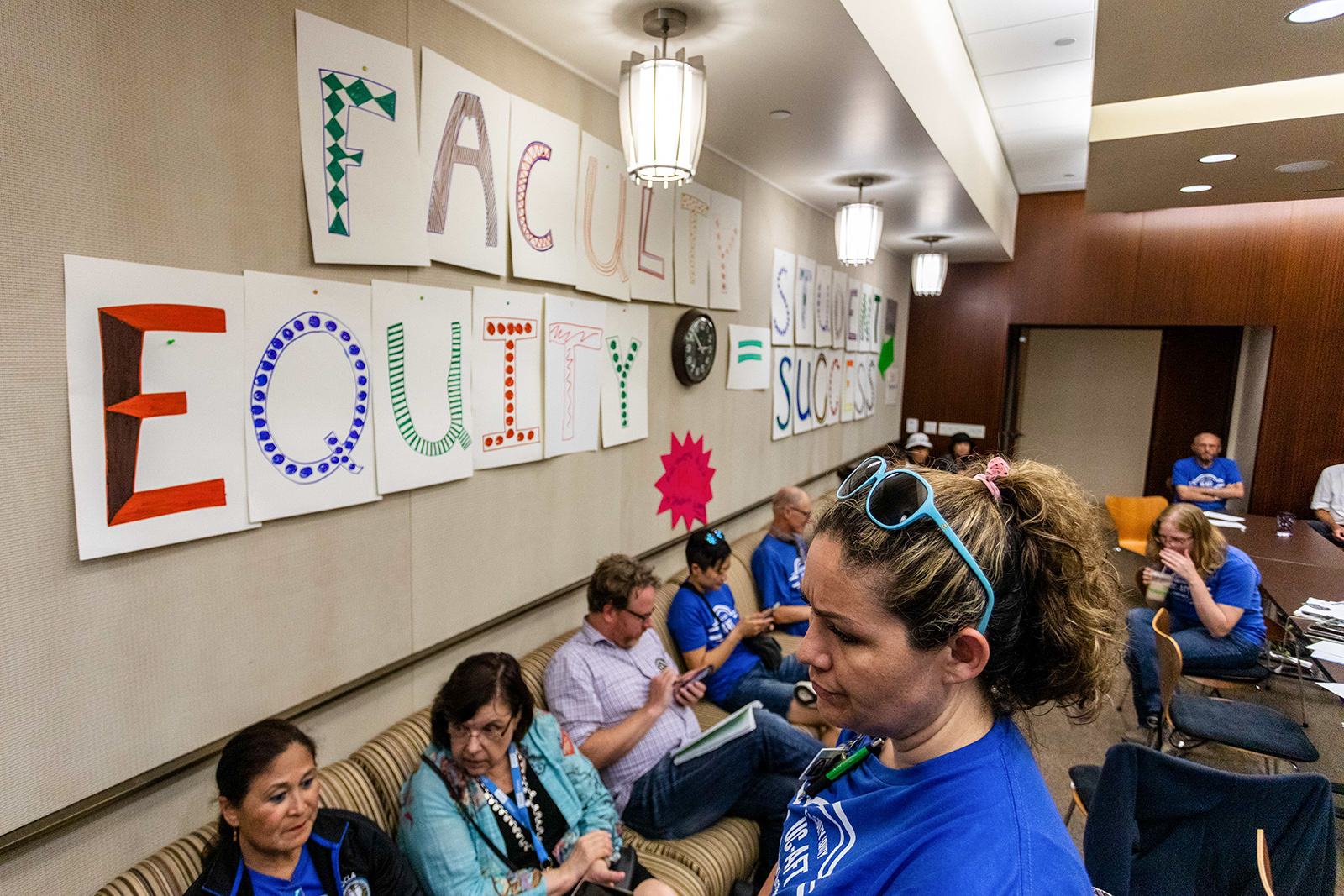 By Wendy Li and Marilyn Chavez-Martinez

The University of California ended a two-year negotiation with a union this week and met with other unions to continue bargaining.

University Professional and Technical Employees-Communications Workers of America 9119, a union that represents about 14,000 research and technical workers in the UC, will vote to ratify a new contract with the university this week and announce results Aug. 9, said Jamie McDole, the president of UPTE-CWA 9119. The UC proposed the tentative five-year contract July 30, which promised increased pay for union members and prevented union strikes for the duration of the contract.

“For the first 18 to 20 months of negotiation, the university was offering 2% increase per calendar year,” McDole said. “It doesn’t keep up with the cost of living in California.”

“We were able to work out a good contract that both respects the work of the employees we represent and protects the interest of the University.” McDole said.

Additionally, UPTE members will be barred from striking for the five-year duration of the agreement.

Research and technical professionals will also receive step pay in 2022 and 2024 based on performance under the new contract. Step pay is a type of salary with a set rate of pay increases based on performance or other negotiated reasons, according to the UC Santa Barbara Human Resources website.

In addition, health care professionals will receive an equity pay increase. Equity pay addresses salary inequity that exists when an employee’s salary is significantly below others with similar performance and experience, according to the UC Berkeley Human Resources website.

Retirement benefits and parking rates will not change under the new deal. Health benefits will remain largely unchanged, although the new deal will impose a $25 cap on annual health insurance increases under Kaiser Permanente and Health Net Blue & Gold Plans.

Sarah McBride, a spokesperson for the University of California Office of the President, said in an email statement that the UC is pleased to reach an agreement with UPTE, and is working on agreements with other major unions.

“This agreement maintains competitive pay and benefits for our employees and recognizes their significant contributions to UC’s mission,” McBride said.

If ratified, the agreement will last until fall 2024.

Tensions flared between the UC and the University Council for the American Federation of Teachers Local 1990 during negotiations Wednesday. The union represents UC lecturers and librarians.

The UC-AFT negotiating team planned to discuss the UC’s rejection of previous UC-AFT proposals for resources such as office spaces, supplies and computing equipment, said Benjamin Harder, a lecturer in writing at the University of California, Riverside and a member of UC-AFT’s bargaining team.

As union leaders and the UC were discussing instructional support, office spaces and office supplies, the UC table team engaged in name calling and left the room abruptly, said Mia McIver, president of UC-AFT and an English lecturer, at a rally afterwards.

She said later to the Daily Bruin that she thought the UC’s actions were discouraging considering the University’s available resources.

“We know that (the resources are) available and that they can be provided,” McIver said.

At their previous bargaining session in July, the University rejected proposals from union members in favor of keeping the original language of the current contract, Harder said.

Amber West, a member of UC-AFT and a lecturer at UCLA, said she makes less now as a UC faculty member than she did as a UC staff member more than a decade ago in a testimonial she delivered to the UC bargaining team Wednesday, which she provided to the Daily Bruin.

“Yet UC claims to be an engine for economic mobility,” West said in the statement. “How can this be so, when a female faculty member from a working-class background is entrapped at the bottom of a second-tier salary-scare, with place on this scale determined arbitrarily by some budgetary bottom line rather than by her credentials, experience or the daily duties she’s assigned and at which she excels?”

West said the union plans to advocate for increased wages. She said the fact the UC was not receptive to changes for smaller matters, such as letterheads, which include an employee’s or organization’s name and address and are used for letters of recommendation, made her concerned for future negotiations.

McBride said the University believes in compensating all employees, unionized or unrepresented, fairly and equitably. She also said it is committed to meeting regularly with union leaders and working in good faith to reach an agreement as quickly as possible.

West said the union’s contract will expire in January. The next bargaining session with UC-AFT will take place mid-September.