Alumni band Hello Noon partnered with Special Olympics Southern California for their newest music video, which has received over 40,000 views. The band and Special Olympics members said their favorite moment during filming came when they got lost and decided spontaneously to film themselves playing their instruments on a mountaintop. (Courtesy of Stephen Spies)

Playing music with friends at sunset on a Malibu mountaintop can be described in many ways. For Caley Versfelt, the best word to use is “funtastic.”

“It’s a word that I made up that’s fantastic and fun together,” Versfelt said. She used it when talking about her favorite moment of being in the most recent music video of alumni band Hello Noon.

Versfelt has Down syndrome and graduated from Pathway at UCLA Extension in 2012, which is an educational program offered by the university for those with special needs. A global messenger for the Special Olympics as well as an actress and activist, Versfelt is one of three individuals with intellectual disabilities featured in Hello Noon’s music video for its song “Run Free.”

The video received over 40,000 views on YouTube within two weeks of its release, which is over 36,000 more than any of Hello Noon’s four other videos.

The band has pledged to donate $1 to Special Olympics Southern California for every Facebook share the video receives, up to $500. As of publication, the video has been shared 324 times.

Hello Noon partnered with Special Olympics Southern California for the video to shed light on the strength of those with intellectual disabilities, said Stephen Spies, a singer and guitarist in the band who graduated in 2017.

The band was founded three years ago by UCLA alumni who met as undergraduates studying music. They bonded over a common desire to bring more positivity to popular music culture, Spies said.

“A lot of our songs come from a place of trying to make the world a better place,” said Danielle Castrence, a vocalist in the band who graduated from UCLA in 2016.

The band’s “Run Free” video was itself the result of a random act of kindness, Spies said. When Hello Noon played at a music festival in Texas, they were approached by a former Disney music manager, who was taken with the band and offered to finance a music video for them, Spies said.

“(She) saw us perform and said, ‘Hey, I want to pay for a music video for you guys. You guys can do whatever you want to with this video,’” Spies said. “So actually the whole video was funded by her, as like a gift to us.”

The band chose to work with the Special Olympics in part due to the members’ personal experiences with those with special needs. Spies, also a music teacher, said he has taught many classes for students with intellectual disabilities.

“I’ve always been amazed when (their) teachers would tell me, ‘Oh, you may not get much of a response from them,’ or ‘Don’t worry about accomplishing too much,’” Spies said. “And (the students will) come in and they’re all ready to go and we’ll just jam out and have a fun time. The condition is never a thing.”

For Versfelt, participating in the music video gave her an opportunity to continue to show others that she is able to do just as much as those who don’t have disabilities, she said.

“Other people are always like, ‘You’re my role model, I want to be like you, you inspire me to do many things,’” Versfelt said. “I told my friend … how I can be on stage with (Hello Noon) and they’re so welcoming. … A friend of mine said to me, ‘I have now seen Caley be a rock star.’”

Oftentimes, when there is conversation about those with disabilities, the focus is on their perceived handicaps, Spies said. But, he said, the goal of the video was to highlight all of the abilities people with disabilities do possess, and to celebrate their accomplishments and talents.

“(Versfelt, Cole Sibus and Jared Kozak are) some of the most incredible people you could ever meet,” Spies said. “They’re actors in TV shows and movies. They’re starting their own businesses. They’re playing in bands themselves. They’re really talented, incredible individuals who have so much positivity and wonderfulness to bring to the world.”

“It feels great,” Sibus said. “What Hello Noon did was really good. And I feel inspired that they want to be innovative.”

Kozak, who is a global messenger for the Special Olympics and an actor, similarly said he hopes the video inspires others to achieve their goals, even if fear sometimes gets in the way.

“I really just wanted to go out there and show anyone they can do anything,” Kozak said. “They don’t need to be afraid.”

Jose Daniel Ruiz, the founder and music director of GME, said he is usually very strict in only allowing GME to play musical selections from video games. However, he said he made an exception for Hello Noon’s video.

“One thing I feel very strongly about is, in terms of what GME orchestra does, is to promote accessibility,” he said. “And I feel that’s very much aligned with the Special Olympics’ mission.”

Spies attributes the video’s success to the fact that it shines a light on Versfelt’s, Kozak’s and Sibus’ stories of hope and joy.

He said he thinks the world is in need of more positivity, and that many have found it in Hello Noon’s video.

“I just love the music they play,” Sibus said. “They are just wonderful, wonderful people, … all the happiness, all the greatness. … I felt very special.”

One moment during filming was particularly special to the group, Spies said.

In several shots of the video, Hello Noon, Versfelt, Kozak and Sibus play their instruments on a mountaintop at sunset. However, the decision to shoot there wasn’t what had initially been planned, said Kyle Dombroski, a percussionist with Hello Noon who graduated in 2017.

“(The original) location was somewhere else, but everyone’s GPS took them to different places,” Dombroski said. “And then one part of the group was in this one area and somehow everyone else just found them there. … It was very spontaneous.”

Versfelt loves being with friends and creating music, she said, both of which she got to do on that mountain in Malibu.

“The best thing I remember about it is being with my friends on the hill,” Versfelt said. “It was pretty cool because I like playing instruments for fun once in a while, and I got to be with all the people I enjoy a lot.” 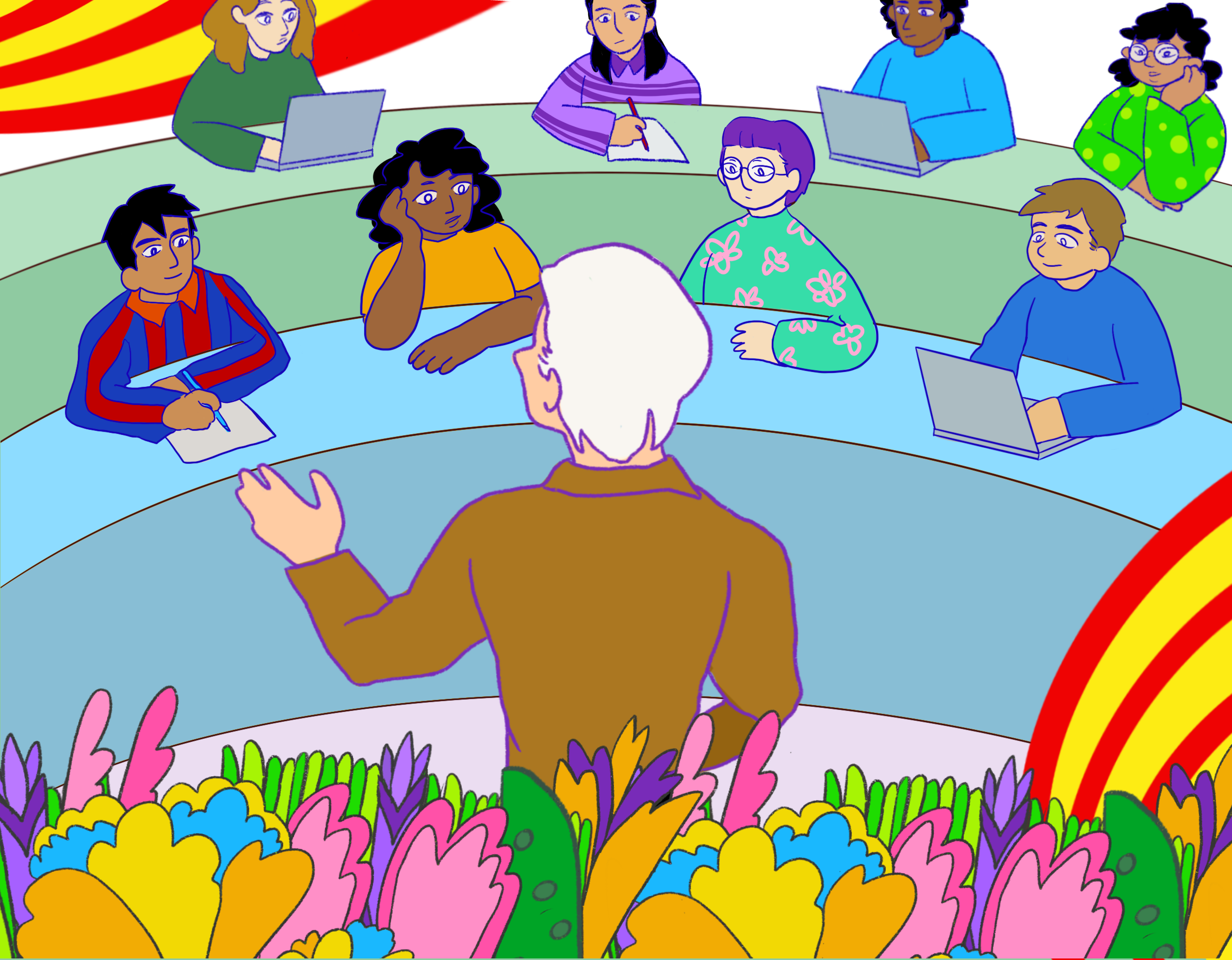