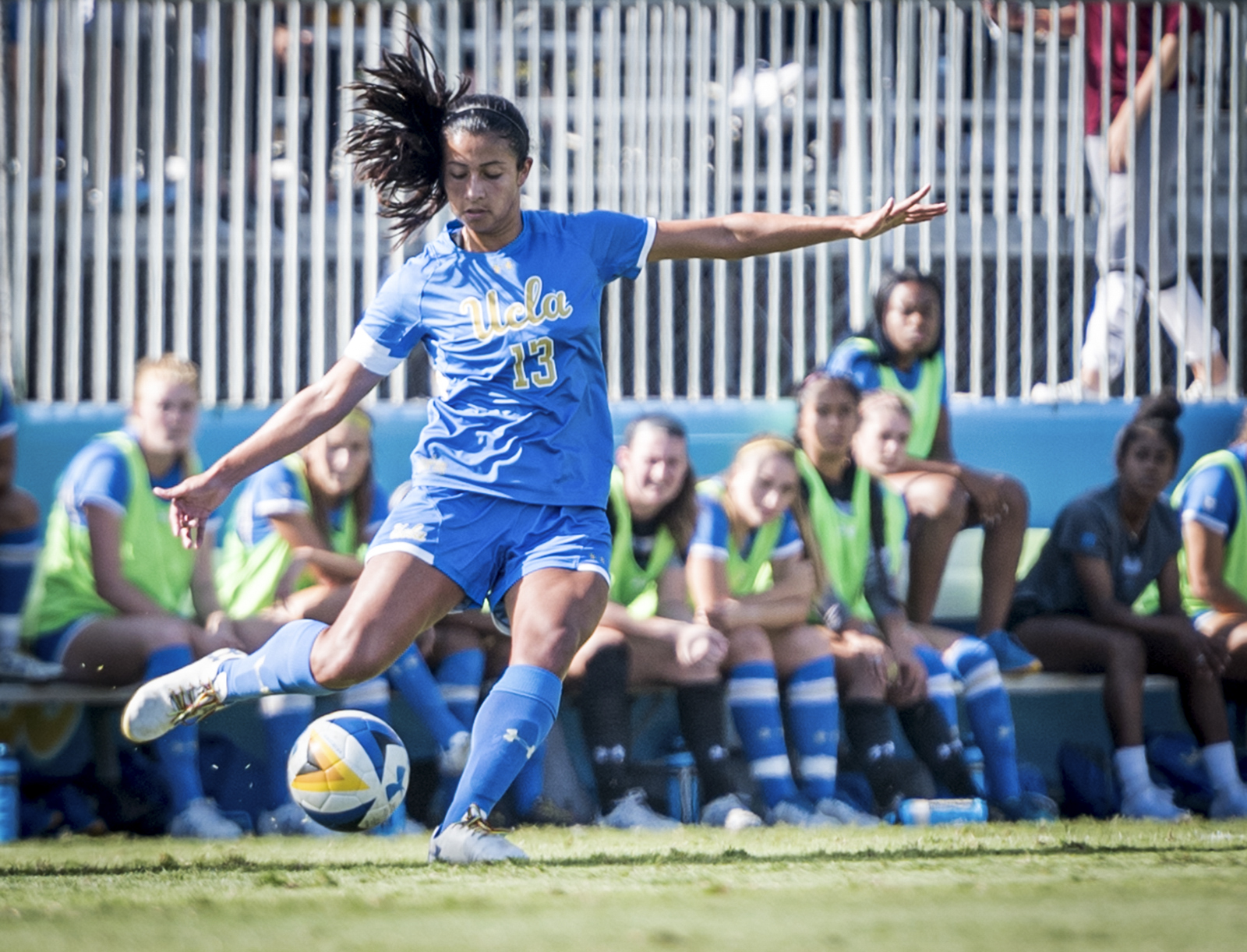 Rising junior midfielder Vivianna Villacorta will be one of 20 Bruins competing in the 2019 Summer World University Games in Naples, Italy, this week. UCLA women’s soccer will represent the United States in the tournament, kicking off Wednesday. (Alice Naland/Daily Bruin)

Two Bruins have been in Europe since early June for the 2019 FIFA Women’s World Cup, and nearly all the rest flew over Thursday night for the 30th Summer World University Games.

UCLA women’s soccer will represent the United States in Naples, Italy, with a 20-player roster that will take on a field of 11 other teams from all over the world. The U.S. will start competition in Pool D on July 4 against Italy, and will finish the first stage facing Japan on July 6 before a potential quarterfinals berth.

“I know most of us have been called up (to U.S. youth national teams), but for other players, I think it’s going to be a really great experience to see how these games work,” said rising junior midfielder Viviana Villacorta. “They’ll get to see that side of playing at a high level and they can aspire to get to that level and work even harder.”

The Bruins posted a 17-3-2 record last year en route to the quarterfinals of the NCAA tournament where they fell to North Carolina in penalty kicks. Prior to being eliminated, UCLA had won 13 consecutive games. The team also led the nation in points per game and tied with Stanford for most goals.

Two seniors from last year’s roster graduated, but the Bruins will return 10 starters alongside an incoming class of 11 freshmen and All-American rising junior transfer Lucy Parker. With rising senior midfielder Jessie Fleming and rising senior goalkeeper Teagan Micah sitting out the World University Games in favor of the World Cup, there was room for seven of the 11 freshmen to earn roster spots.

“We have a lot of incoming freshmen and I’m pretty sure (coach Amanda Cromwell) is going to try out new people and see how we fit,” Villacorta said. “This is before preseason, so I guess this trip is just to help us get a better understanding of each other and see how we play with each other.”

Rising redshirt sophomore Lauren Brzykcy and incoming freshman Hannah Mitchell will be the two goalkeepers on the U.S. roster for the World University Games, since Micah had been playing with the Australian national team.

Micah has been a starter since her freshman year and played in every game in her first two seasons, but last year, the goalkeeper missed some contests due to a concussion and sitting out to give minutes to Brzykcy.

After posting two solo and two shared shutouts in just eight starts, Brzykcy earned a spot on the Pac-12 All-Freshman team, but the World University Games will be an opportunity for her to get more significant playing time.

In addition to the freshmen’s debuts, rising redshirt senior forward/midfielder Anika Rodriguez will make her return to the pitch after suffering a knee injury in October against Arizona State. Before the injury, Rodriguez led the team in goals and assists.

Villacorta also worked through injuries in the offseason, spending several weeks in both a boot and a sling. The midfielder returned to running and training with the team and made appearances in three spring games, but will look to continue her recovery.

“Once I started running, I definitely felt super motivated to get fit,” Villacorta said. “I have high expectations of myself, but I’m just trying to get some minutes in, help the team in whatever way I can. If I’m not playing, that’s fine because I know my role and I’m just here to support the team.”

The Bruins’ first match representing Team USA will be on the Fourth of July.