Construction on Sunset Boulevard to cause lane closures for yearlong project 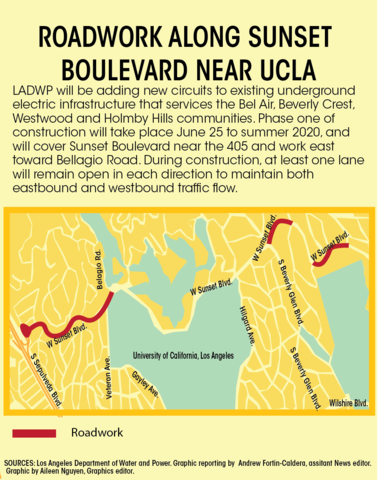 Yearlong roadwork on Sunset Boulevard near UCLA might cause travel delays to Westwood, according to a university announcement June 24.

Construction will occur on Sunset Boulevard between the 405 Freeway and Bellagio Road, and between South Beverly Glen Boulevard and Carolwood Drive.

Road crews will close portions of some lanes every weekday from 9 a.m. to 3:30 p.m. and Saturdays from 8 a.m. to 6 p.m., according to the Los Angeles Department of Water and Power. At least one lane will remain open in each direction for traffic.

The construction is part of an LADWP project to install additional power lines underground. The project began Tuesday and will continue until summer 2020.

UCLA said the roadwork might cause delays for patients, visitors and staff traveling to Ronald Reagan UCLA Medical Center and other UCLA Health facilities in Westwood. The university advised drivers to plan for extra travel time or consider alternate routes.

Chang Gao, a graduate student in medicine who commutes to campus by way of Sunset Boulevard, said she thinks the lane closures have only delayed drivers a little.

“The traffic during summer is not as busy as usual,” Gao said. “We have to see how it goes when school begins.”