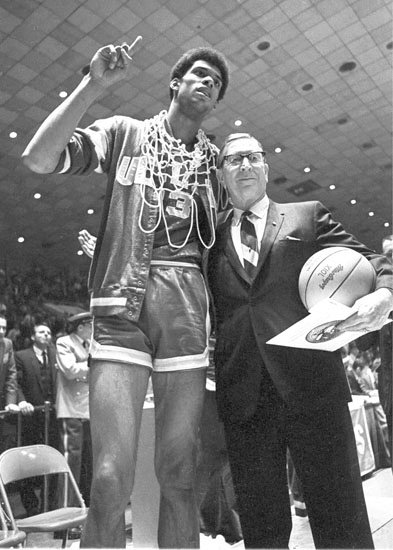 In the 1969 NBA draft, former Bruin Kareem Abdul-Jabbar was picked No. 1 overall. Abdul-Jabbar went on to become the NBA’s all-time leading scorer. (Courtesy of UCLA Athletics)

UCLA has historically been one of the top producers for talent that has graced mid-June’s NBA draft.

UCLA ranks fourth all-time in players selected in the first round with 39 – only behind powerhouses Kentucky, North Carolina and Duke – and it is one of 19 schools with at least two No. 1 picks.

This year marks a few anniversaries of UCLA’s most memorable drafts.

The 2009 draft is widely considered one of the best in recent memory – see Stephen Curry, James Harden, Blake Griffin – and two of its most accomplished players wore UCLA blue and gold.

Coming into the draft, the Bruin backcourt of then-freshman Jrue Holiday and then-senior Darren Collison started all 35 games side by side. While Holiday was a consensus first-round pick, Collison was more widely projected to go anywhere from the end of the first round to the late second round.

Holiday and Collison were selected No. 17 by the Philadephia 76ers and No. 21 by the New Orleans Hornets, respectively.

Holiday was seen as an intriguing combo guard with a high upside, according to NBADraft.net. His defensive instincts, speed off the dribble and above-average passing ability were all attributes that attracted NBA lottery attention.

However, Holiday’s performance in college was underwhelming given his talent and expectations coming out of high school, averaging 8.5 points, 3.8 rebounds and 3.7 assists per game during his single season at UCLA. His jump shot was inconsistent and he wasn’t able to fit into UCLA’s team offense at times during the season.

Holiday’s formative years in Philadelphia concluded with his only All-Star appearance in 2013, and he was subsequently traded to the New Orleans Pelicans for center Nerlens Noel.

After he put together career-highs of 21.2 points and five rebounds per game in the 2018-2019 season, general manager David Griffin said the Pelicans were “Jrue Holiday’s team” Friday, the day after they had drafted Zion Williamson.

Collison started 142 games and 104 started over his four years in Westwood, and over the three years he started for the Bruins, Collison averaged 13.8 points, 4.7 assists and 1.9 steals per game.

Collison was a polished product coming out of college with a high basketball IQ and was superb on ball defense, according to NBADraft.net. Although his offense wasn’t eye-popping, he was seen as an efficient shooter with next-level speed.

He has bounced around with five teams in his time in the NBA – the New Orleans Pelicans, Indiana Pacers, Dallas Mavericks, Los Angeles Clippers and Sacramento Kings. He has started 518 of his 708 games played and averaged double-digit points per game in all 10 of his seasons in the association.

Collison is currently a free agent after his two-year, $20 million deal with the Indiana Pacers expired following the 2018-2019 season.

Baron Davis was drafted thid overall to the Charlotte Hornets after two years as a Bruin. He played for six teams in his 13 seasons, most notably the “We Believe” Warriors in 2006-2007.

Over his career, Davis made two All-Star appearances and averaged 16.1 points and 7.2 assists per game. After he retired, Davis went on to become a broadcaster, actor and entrepreneur.

In 1969, Lew Alcindor – later known as Kareem Abdul-Jabbar – was drafted as the first overall pick by the Milwaukee Bucks.

Two picks later, UCLA graduate Lucius Allen was selected, making he and Abdul-Jabbar the first pair of college teammates to be picked inside the top three.

Abdul-Jabbar went on to become the NBA’s all-time leading scorer. He compiled 19 All-Star selections, six MVP awards and six NBA titles in his 20-year career, with a Hall of Fame selection to boot.