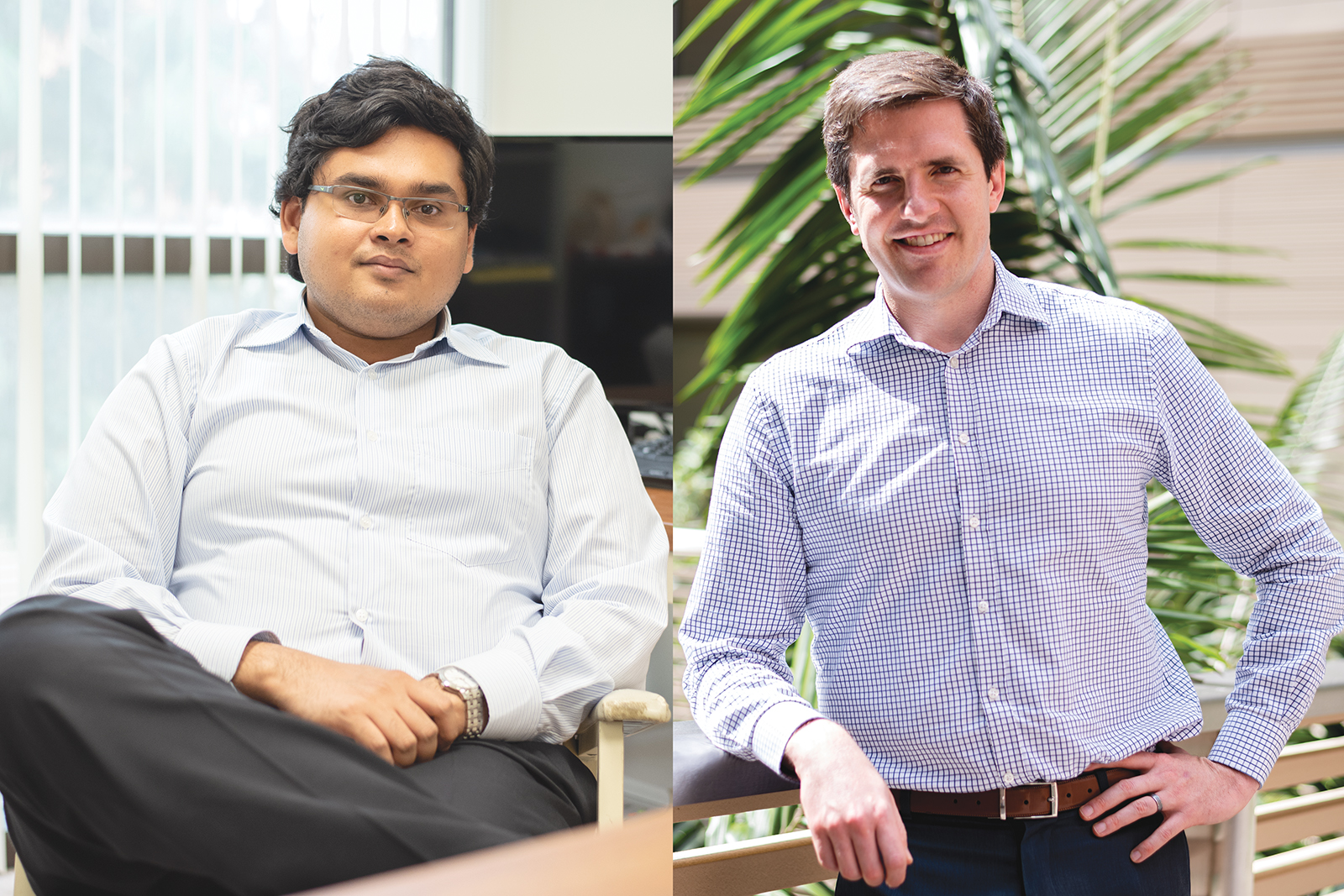 (Left-Right) Professors Khalid Jawed and John Hopkins are amongst UCLA researchers that are currently developing flexible materials and structures. These materials have myriad applications, from delivering drugs in the human body to making aircraft more efficient. (Joe Akira/Daily Bruin staff)

By Phoebe Chen and Sameera Pant

UCLA researchers have been developing flexible materials and structures that can perform a variety of tasks, from delivering drugs to specific parts of human body to making aircraft more efficient.

Jawed has been developing soft robots that could be used to deliver drugs to specific locations in the body. He said soft robots would be more compatible with humans than traditional medical technology.

“(Soft robots) are not going to harm you even if you are in contact with them. This is a contrast (to) rigid metal propellers (used in medical devices),” Jawed said. “The field of soft robotics essentially brings robotics closer to humans just because of their safety.”

Jawed said his soft robot could also be used for environmental and structural monitoring, like in pipeline inspection, because of their flexibility.

“(Soft robots) are a lot more resilient,” Jawed said. “It is easy to break a rigid robot, whereas a soft robot can undergo much larger deformation before it fails.”

Jonathan Hopkins, a mechanical and aerospace engineering assistant professor, has been working on a different category of flexible technology: architected materials, which are made by linking other smaller materials together.

“The neat thing about architected materials is that it doesn’t really matter what they’re made of,” Hopkins said. “They get their overall properties and behaviors from how they’re structured on a small scale.”

Hopkins said architected materials would not require a lot of energy to operate. He added that these materials could be implemented into the wings of an airplane to make flying more energy efficient.

“For different gusts of wind, (these materials) basically make it more energy efficient if you can accommodate changing wind conditions, and you can be more maneuverable,” Hopkins said. “(This would) reduce fuel costs in airplanes by a lot.”

Hopkins and Jawed said they take inspiration from their surroundings to develop their flexible technology. Hopkins said his team was inspired by mechanical gears’ rigidity and limitations.

“(Mechanical gears) roll on each others’ surface without flipping so the teeth don’t shear off,” Hopkins said. “We wondered: Is there a (flexible) version of that? One that is purely deforming like a soft material?”

Jawed said he takes inspiration from nature, modeling his soft robots after bacteria. He said he believes the natural world holds the answers to unlocking soft robots.

“If you look at octopus, starfish, jellyfish, humans, all the microorganisms, all of them are soft. There should be a reason they are soft,” Jawed said. “We think that we can harness some of these principles that are obvious in biology to build more and more functional robots.”

Qibing Pei, a professor of materials science and engineering, is working towards developing more elastic materials. Thus far, Pei and his team have developed a prototype of a thin, flexible cooling device with their findings.

Pei’s research involves the usage of electrocaloric polymers. When researchers apply electricity to the plastics, their entropy decreases. A material’s entropy is the measure of a system’s thermal energy per unit temperature that is unavailable for doing useful work, according to the Encyclopaedia Britannica.

The role of electrocaloric polymers takes the form of a film in a cooling device, Pei said. Coated with a conductive layer, the film moves back and forth between a heat source and a heat sink. The film takes the heat from the source to the sink, which absorbs it.

Pei said the primary application for this smaller cooling system would be in electronics, such as batteries and central processing units in computers, which heat up with use.

A secondary application would be developing a portable or wearable personal cooling device, a possibility given the system’s small size, he added.

Pei said the next step in developing the cooling device would be to find ways to increase the electrocaloric polymer’s cooling effect while studying its properties.

Lihua Jin, an assistant professor of mechanical and aerospace engineering, works with hydrogels. A type of polymer that disperses in liquid, hydrogels have a large water content, which makes them extremely soft materials.

Although Jin is working on developing new hydrogels in her lab, examples of these polymers can be readily found in our daily lives, she said.

“There are a lot of daily life examples of hydrogels, for example, gelatin, which is a polymer with a lot of water inside of it, and tofu,” Jin said.

Jin said the extremely soft nature of hydrogels make them compatible with soft tissues within the human bodies, as human tissues and hydrogels have similar mechanical properties. As a result, hydrogels are highly applicable within biomedicine.

Jin said currently her researchers are working on different applications of soft materials, such as soft robots and soft actuators. An actuator is a device which converts the energy of a control signal into some physical change, such as motion.

She added the next step in the development of soft materials would be further comprehension of material properties, and eventually developing theories that could possibly predict material behavior.

“Chemists, they develop the material, but for us, for mechanical engineering, we try to understand the material and even predict (the material’s) behavior,” Jin said.

So far, Jawed and Hopkins have both achieved models on the centimeter scale, however the researchers want to make their technology even smaller.

Hopkins said he is working on reducing the size of CRAMs until the constituent parts of the architected material could be barely made out.

“We’re pioneering the approach to be able to make each CRAM the size of a red blood cell,” he said.

Jawed said although there has been a great degree of research, soft and flexible materials still need further development.