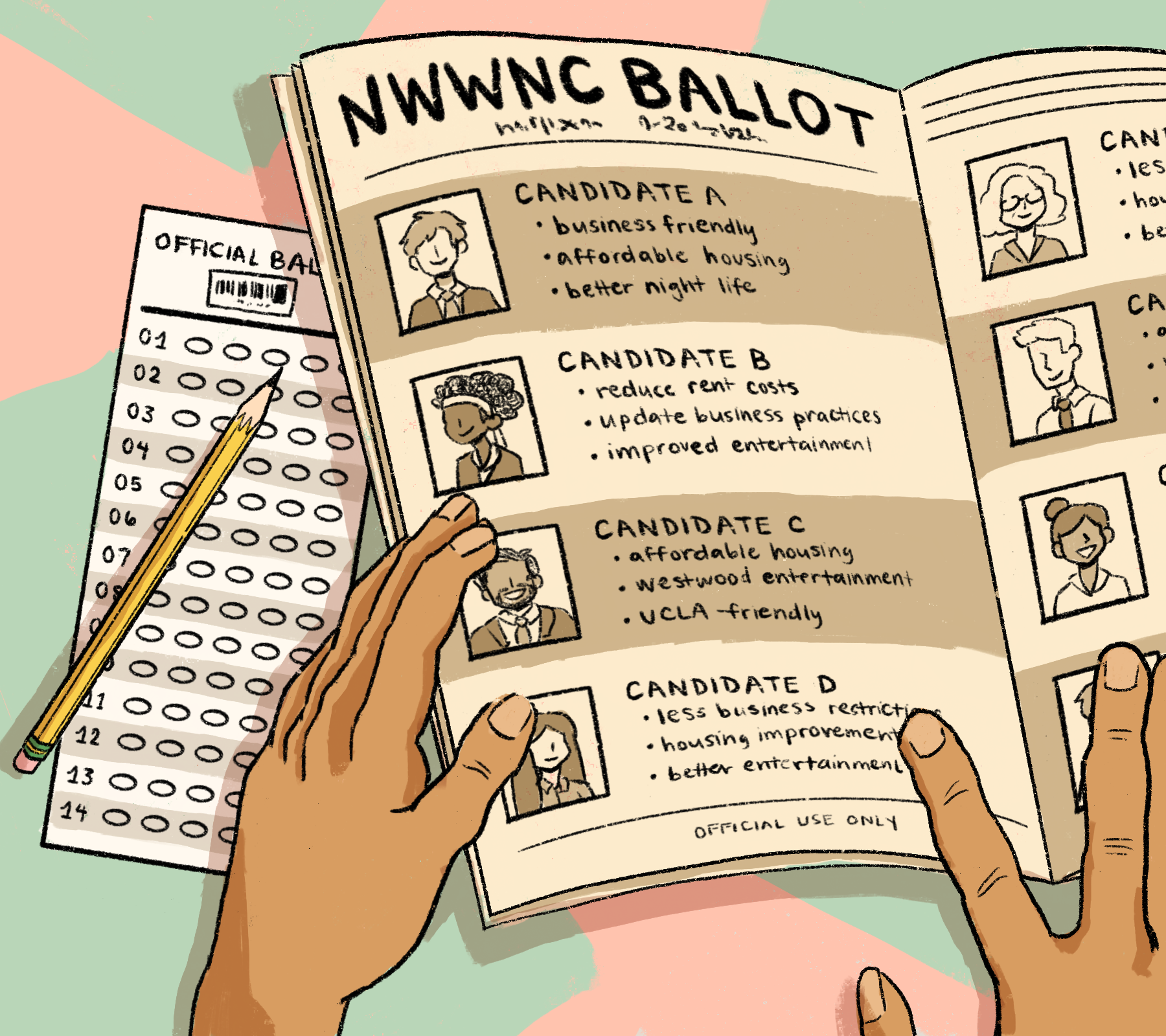 Voters elected the NWWNC’s first full-term council May 16. Voter turnout peaked at 270 votes for the highest-voted candidate, which is a decline from the council’s October 25 election to determine interim board members. The council’s October election saw 851 total ballots cast.

The NWWNC was formed following a May 2018 vote to subdivide the jurisdictions of UCLA’s campus, Westwood Village and North Village from the Westwood Neighborhood Council.

Westwood Forward, a coalition of renters, business owners and students, advocated for the subdivision on a platform to serve the northwest Westwood community through prioritizing affordable housing and the growth of businesses and nightlife in Westwood.

Alisha Ranadive, worker stakeholder and chair of the NWWNC Election Committee, said the drop in voter turnout was because the election in May did not directly affect students in the way that the October election did.

“We did not anticipate how hard it would be to get people to care about the neighborhood council,” Ranadive said. “What may have made the last election more successful than this election is the ability to harness student power.”

Ranadive reported that the NWWNC advertised extensively in print, electronically and in-person in order to get the word out about the election. She said the May 16 election served as a learning experience to discover what marketing strategies work for the northwest Westwood community.

Ranadive plans to expand the in-person outreach aspect of campaigning for the next election.

Michael Skiles, former president and current renter stakeholder of the NWWNC, said students were highly involved in campaigning for the council to break from the WWNC because of how it would directly benefit them. However, he said he thinks the May election was not as significant to students since the council has already been established.

“Students get energized and participate when there is a clear rallying call that affects student interests,” Skiles said.

Most of the candidates were not divided by party alignment and had the same general goals of affordable housing and growth of businesses in Westwood, Skiles added.

“I think that the biggest thing is that there wasn’t that much campaigning on any side because the election didn’t hit ideologies against each other,” Skiles said. “We’re really all on the same team. Non-partisan outreach does not excite and engage voters as much as partisan outreach.”

NWWNC received significantly lower voter turnout than the WWNC in this most recent election, which saw 833 votes cast for the highest-voted candidate.

Skiles said the WWNC’s election saw much higher participation because there was more contention in who would be elected.

“There are two slates running against each other with fundamentally different visions for Westwood,” Skiles said about the WWNC election. “They’re campaigning hard against each other and I would be very surprised if as a result they didn’t get a much higher turnout.”

The NWWNC intends to offer online voting for elections in the future because only one polling place open for a set amount of hours limits accessibility to voters. Ranadive said many people reported not being able to vote due to their work and class schedules.

The council advocated to Los Angeles City Council for implementing online voting for the May election, but the vendor that the city was working with could not establish a secure system in order to accomplish this, Skiles said.

Stephen Box, public information officer for the Department of Neighborhood Empowerment, said low voter turnout is a standard problem and a basic aspect of community engagement.

“In elections in general, we always strive to engage the community and make voting a meaningful and rewarding experience,” Box said. “I think engaging voters is a constant and ongoing conversation.”

Ranadive said the NWWNC’s election campaign was a challenge, but the council learned important lessons about how to work with the resources they have.

“We have our work cut out for us,” Ranadive said. “I think we’re very energized to capitalize on these lessons and do a better job the next time around.”