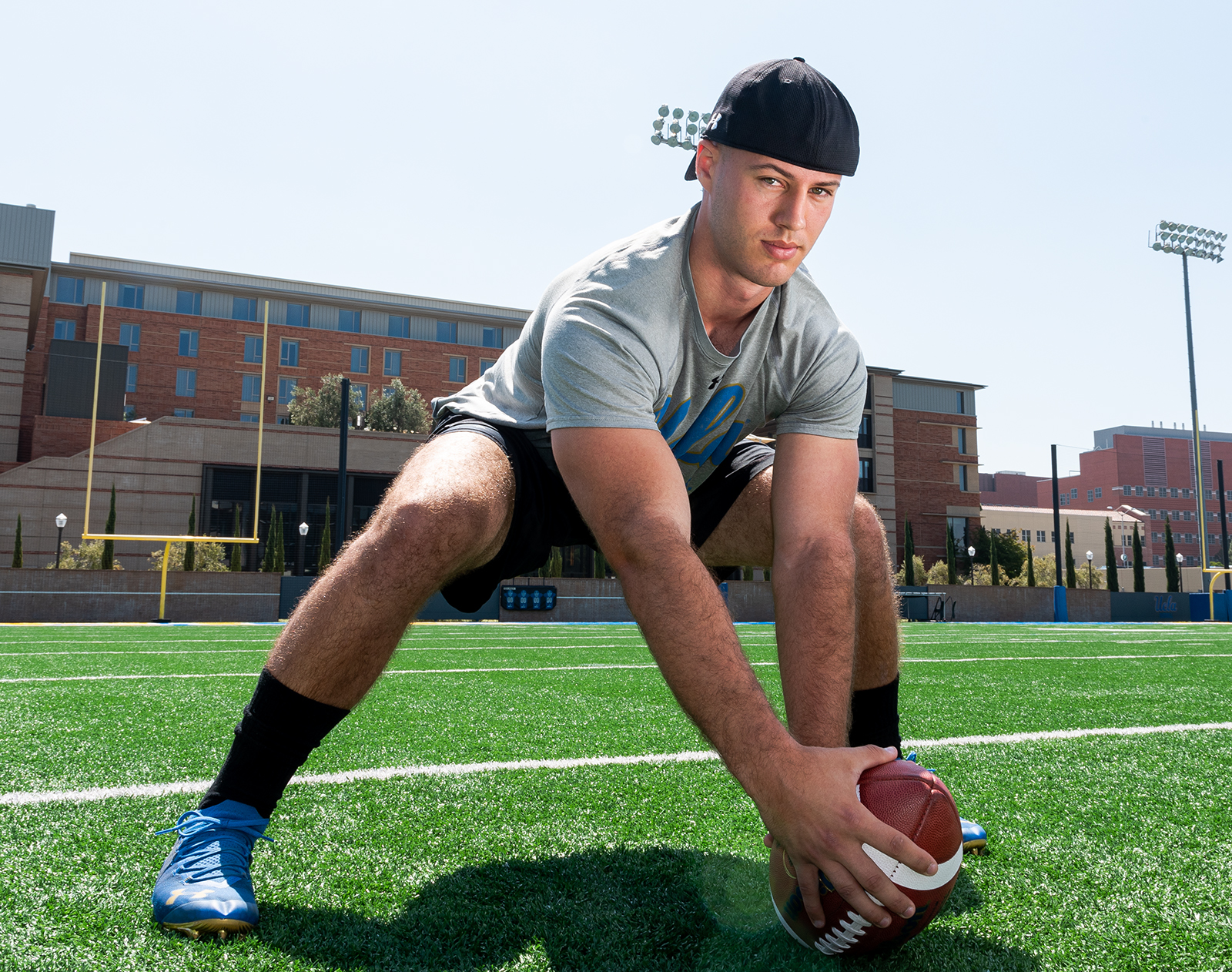 Junior long snapper Johnny Den Bleyker has been the long snapper on every kick and punt for UCLA football over the past three seasons. Den Bleyker attended the Rubio Long Snapping camps in high school. (Kristie-Valerie Hoang/Daily Bruin senior staff)

Set to graduate a year early and pursue a master’s degree, the junior long snapper for UCLA football has been playing chess since elementary school.

He took it up again this offseason when coach Chip Kelly brought in chess instructor Seth Makowsky for the quarterbacks and made chess lessons available for the whole team.

“Before coach Kelly got here, probably no one (played chess),” Den Bleyker said.

Not too many people understand his recherche role on the football field either.

“I still talk to a lot of close friends and family members, and they still don’t know what exactly a long snapper is,” Den Bleyker said. “It’s definitely an obscure and very specialized position.”

It may be obscure to the average sports fan, but not to the Den Bleyker household.

Those competitions set the table for long snapping.

Much of the camp focuses on the technique of chucking a football between the legs, from locking the legs to following through with the arms and hitting the punter in the so-called “Rubio Zone” – the area between the armpits and from the lowest rib to midthigh.

But there’s another level to the camps.

“They try to add a lot of pressure situations and see how you handle pressure,” Johnny Den Bleyker said. “A lot of it is learning how to conquer your mind at these camps, and just getting comfortable doing what you do.”

Rubio said that he walks up to some of the kids at his camp and whispers in their ears as they get ready to snap, to try to break their nerve or get them to laugh. His strategy is to make his camps more pressure-filled than an actual game.

“It takes a long time to really grasp how strong mentally you need to be because you just can’t make a mistake,” Rubio said. “(At UCLA), I remember I would practice with my eyes closed because then I thought to myself, ‘If I could do this with my eyes closed, eyes open is going to be simple.'”

The campers quickly learn that long snapping is more than a set of physical motions.

Malcolm Gladwell once famously declared that 10,000 hours of practice lead to mastery of a skill. The younger Den Bleyker said he’s only been snapping since eighth grade, while also playing other positions on the field.

“For me, I try not to think at all,” said Johnny Den Bleyker. “I like to approach it like a fourth grader – how would they do it? And make it as simple as possible. Just throw the ball through your legs.”

Den Bleyker’s first game as a Bruin was at Texas A&M, a nationally televised contest that drew more than 100,000 spectators – a far cry from the couple hundred people he estimated showed up to his high school games.

And then there’s the pressure situations, such as game-winning field goal attempts in a stadium shaking with anticipation and fanatical screams.

Not that it affects Den Bleyker.

That composure was something Rubio spotted in Den Bleyker when he was a high school junior.

“He was very, very strong mentally, where he was one of those kids who could just relax and have a good time,” Rubio said. “He had one of those personalities where he didn’t overthink too much, and that helps out a lot. When a kid starts to think, they start to think, and that becomes a problem.”

Den Bleyker’s consistency helped him outlast several other long snappers at Rubio’s camps to earn an invitation to the All-American game, a process he called one of the most pressure-filled things he’s ever accomplished.

And while UCLA’s special teams units have received a negative reputation in recent years for opponents’ long kick and punt returns, missed kicks, or other mishaps, Den Bleyker’s teammates said he shouldn’t be in that conversation.

“What (Den Bleyker) allows me to do is basically just worry about kicking the ball,” Molson said. “I know (the ball) is going to be there, so I can just go with no hesitation and just kick the ball. So to know that he’s so fine-tuned and technically sound and does well under pressure, that just takes so much (pressure) off my shoulders.”

The relationship between a long snapper, holder and kicker is as tight-knit as any on a football team because each serves as a cog in a machine.

Even if something does go wrong, the specialists don’t even wait to go back to the sideline before talking to each other. Den Bleyker said they’ll know almost immediately what happened, work on it a couple of times on the sideline and then resume their regular conversations.

If Den Bleyker fires off a bad snap, the culprit is easy to pinpoint.

“Nine times out of 10, it’s a confidence issue,” Rubio said. “It’s usually just the mental aspect that kills their form.”

But more often than not, Den Bleyker’s snaps hit the mark. Molson said that probably only one in 100 field goal misses is Den Bleyker’s fault.

Den Bleyker gets an additional incentive on fourth down if UCLA punts. Assuming the kick goes off without a hitch, he gets the opportunity to channel his past as a high school linebacker and, in his words, be an athlete on the field.

He has two career fumble recoveries and one career tackle. They represent a rare opportunity for his teammates to celebrate his physical achievements, which are made possible by his mental fortitude on long snaps.

In the grand scheme of things, Den Bleyker may seem like any other ordinary chess piece in Kelly’s arsenal. But to someone who’s been in a long snapper’s shoes, he could just as well be considered the king.

“On fourth down, we’re the only ones cheering,” Alex Den Bleyker said. “Everyone else is usually not too happy to punt or kick a field goal, but we’re happy because Johnny’s running onto the field.”